Riding high on the critical success of Daredevil, Jessica Jones and Luke Cage, Marvel and Netflix are ramping up advertising on their fourth collaborative project, Iron Fist. Though Daredevil was at least somewhat known to mainstream audiences thanks to (or perhaps in spite of) the 2003 movie starring Ben Affleck, the rest of Marvel’s streaming properties come from more obscure origins. Iron Fist is no exception, and this is the first time the character will have been brought to life in live-action. Though you may not have heard of him, the character has been around for nearly 40 years, and he’s rubbed elbows with pretty much everyone in the Marvel Universe at one time or another. While reading a pile of back-issue comics large enough to crush a small child could be a fun way to spend a weekend, don’t feel bad if you’d prefer to read this handy guide to get you caught up in time for the show’s March 17 premiere instead.

The year was 1974, and Kung fu was everywhere. Bruce Lee’s Enter The Dragon had hit cinemas like a one-inch punch, made bittersweet by its stars’ death just weeks before. The David Carradine-starring series Kung Fu was pulling in decent ratings on the small screen, and a certain song was being played to death on the radio, proclaiming the ubiquity of Kung fu for all to hear. Marvel had already begun to capitalize on this new craze in 1972 with the debut of Shang-Chi, Master of Kung Fu, but that wasn’t the end of it.

Iron Fist writer and creator Roy Thomas heard the term “Iron Fist” in a martial arts movie, and liked the sound of it. After running the idea by Stan Lee, Thomas got the go-ahead to begin developing a new martial arts-themed character for Marvel. Thomas drew a lot of inspiration from Amazing-Man, a now super-obscure character created by Bill Everett. Like Amazing-Man, Iron Fist would be an orphan raised in a secret Tibetan monastery inspired by the myth of Shangri-La. Upon mastering the martial arts, including several supernatural abilities, both characters then ventured out into the world to use their powers for good.

Iron Fist first appeared in issue 15 of Marvel Premiere, a series used not only to revisit characters who no longer could sustain their own titles, but also launch new creations. After appearing in ten issues of Premiere, Iron Fist began appearing in his own self-titled series starting in 1975. Sales dropped off, and Iron Fist’s solo series was unfortunately canceled by issue 15, despite the all-star creative team of writer Chris Claremont and artist John Byrne.

Marvel was interested in keeping the character around though, and decided to team him up with another character, one whose book was seeing a sales drop: Luke Cage, AKA Power Man. You’d think that the pairing wouldn’t work, but the two struck a balance, with Iron Fist’s level-headedness complementing Cage’s more fiery temper. Think Riggs and Murtaugh, but with the ethnicities swapped and more colored spandex. The pairing worked, and a lighter tone helped the book stick around for a total 125 issues. 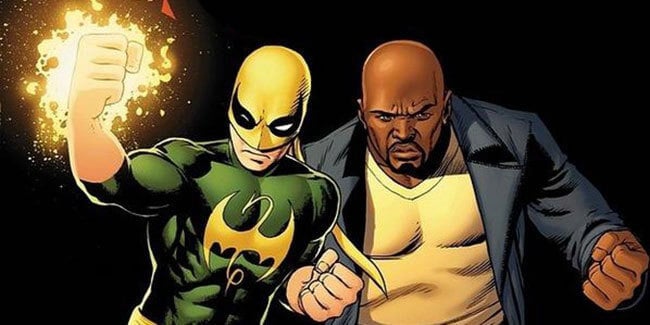 Iron Fist died in the final issue of the team-up series, but comics being comics, he eventually came back. Since his return, Iron Fist has been a fairly regular presence in Marvel comics. He’s had several solo titles in recent years, under writers including Matt Fraction and Kaare Andrews. He’s also been a regular supporting cast member in other series, including The New Avengers, Daredevil, and more recently a new Power Man and Iron Fist series.

The last year or so has seen Marvel introduce paranormal elements to their TV and movie properties, or at least paranormal elements that don’t try and pass themselves off as science through the use of words like “quantum.” The Marvel Cinematic Universe saw the introduction of magic through Doctor Strange, and Ghost Rider’s appearance on Agents of S.H.I.E.L.D brought the supernatural to the TV side of things. Unless Iron Fist’s Netflix series is secretly a drastic reinvention of the character, he’ll bring a similar infusion of magic and the supernatural to Marvel’s streaming properties.

Iron Fist’s story begins with Wendell Rand, a billionaire industrialist who brings his wife and young son, Danny, to the Himalayas in search of the mystical city of K’un-Lun. Wendell has his own (long, hard to explain) reasons for wanting to find K’un-Lun, but he never makes it, as he and his wife both die after his business partner, also along for the trip, betrays them. Danny is found by the monks of K’un-Lun and is raised in the hidden city, mastering numerous forms of martial arts.

Eventually, Danny rises to the top of K’un-Lun’s warriors and earns the right to become the city’s champion, or “Immortal Weapon,” the Iron Fist. To do so, Danny defeats a dragon named Shou-Lau the Undying, absorbing its chi (or life energies), which grants him superhuman abilities and a rad chest tattoo. Using the chi of Shou-Lau, Danny can increase his physical abilities, most notably by concentrating his energy into his fist. This turns his blows into devastating attacks capable of punching through just about anything.

After becoming the Iron Fist, Danny leaves K’un-Lun to reclaim his father’s company and use his powers for good as part of the superhero scene.

So while previous Netflix series like Daredevil and Luke Cage are all about gritty realism, Iron Fist goes in another direction entirely, with a premise rooted firmly in martial arts mysticism. It’s highly unlikely that we’ll see a whole lot of K’un-Lun, Shou-Lau, or much else of the more “out there” aspects of Iron Fist lore directly, both for budgetary reasons and because the Netflix series so far have preferred to play things more…”realistic.” There hasn’t been any sign of Iron Fist’s signature green and yellow costume in any promotional materials yet, for one thing, but who knows? Maybe the trailers are grossly misrepresenting the show, and it’s actually a bright, colorful martial arts spectacle full of magic and mayhem like some people want it to be.

Like most Marvel characters, Iron Fist has a fairly extended supporting cast of friends and allies, of the costumed and non-costumed variety. Audiences will meet some of them for the first time when the series premieres, but more than a few important faces in Danny’s life will already be familiar to those who watched Daredevil, Jessica Jones and Luke Cage.

The obvious one is Danny’s best friend and frequent partner in crime-fighting, Luke Cage. Cage and Danny probably won’t meet face to face until the two teamup with Daredevil and Jessica Jones in The Defenders, the Avengers of the Marvel/Netflix partnership. To hear Colter tell it, the roles have been reversed a bit, with the more eager Iron Fist being tempered by Luke’s cooler, more experienced mentality.

Cage himself isn’t the only cast member from Iron Fist‘s direct predecessor to play an important role in Danny’s life, though. One of the fan-favorite characters from Luke Cage, NYC detective Misty Knight, is a hugely important character in the Iron Fist mythos. Misty and Danny have a tumultuous relationship history to say the least, going from on-again to off-again to back-on-again a number of times. At one point, it even looked as though the two would be having a child together, though this turned out to be a phantom pregnancy in a less-than-stellar moment of narrative hand-waving. Misty has been confirmed to not be appearing in Iron Fist, but actress Simone Missick has been spotted on the set of The Defenders brawling with Jessica Jones, so odds are that the groundwork for the Misty/Danny pairing will be at least laid out.

The last of Danny’s allies we’ve already met is Jeryn Hogarth, Carrie-Anne Moss’s character from Jessica Jones. Jeryn, aka Jeri, is a gender-swapped version of Danny’s family lawyer, who helps Danny juggle the worlds of business and superheroics. Carrie-Anne Moss has been confirmed to be returning in Iron Fist as well as The Defenders, probably playing a similar role as her counterpart from the comics.

On the villain side of things, it’s been heavily implied that Madame Gao, the mysterious crime lord who appeared in both seasons of Daredevil, is in fact an Iron Fist villain by the name of Crane Mother. K’un-Lun, you see, is one of seven “Capitol Cities of Heaven,” extra-dimensional city-states that flit in and out of contact with the plane of Earth. Each one has its own champion similar to K’un-Lun’s Iron Fist, usually with much cooler names like “Bride of Nine Spiders” and “Dog Brother #1.” Crane Mother rules over K’un-Zi, and has a major ax to grind with Iron Fist. The previous holder of the mantle of Iron Fist, a man named Orson Randall, killed the champion of K’un-Zi, Crane Mother’s child. Crane Mother can only give birth to a new champion every 300 years, and the untimely death of the current champion left K’un-Zi weakened. Desperate for revenge, Crane Mother reached out to Davos, an old Iron Fist enemy who went by the name Steel Serpent. That name should sound familiar, as the name “Steel Serpent,” as well as the character’s logo, adorned a powerful drug sold by Gao’s organization in previous Netflix shows. Gao has been confirmed to be appearing in Iron Fist, and it’s probably only a matter of time until she’s confirmed to be Crane Mother.

That leaves one last important member of Danny’s extended family, one who we’ll meet for the first time in Iron Fist. Actress Jessica Henwick will be playing Colleen Wing, a private investigator and martial artist. Colleen is best known as one half of the Daughters of the Dragon, with the other half being Misty Knight. Similar to Iron Fist and Luke Cage, Wing and Knight have been a longtime duo in the comics, having first teamed up way back in 1977. The two won’t be crossing paths until The Defenders, so add that to the increasingly large pile of relationships that show will have to set up.

And that’s really everything you should need to know. Iron Fist has a long, rich history to draw on, and hopefully Marvel and Netflix make the most of it.

Black Mirror: Hooked on a Title