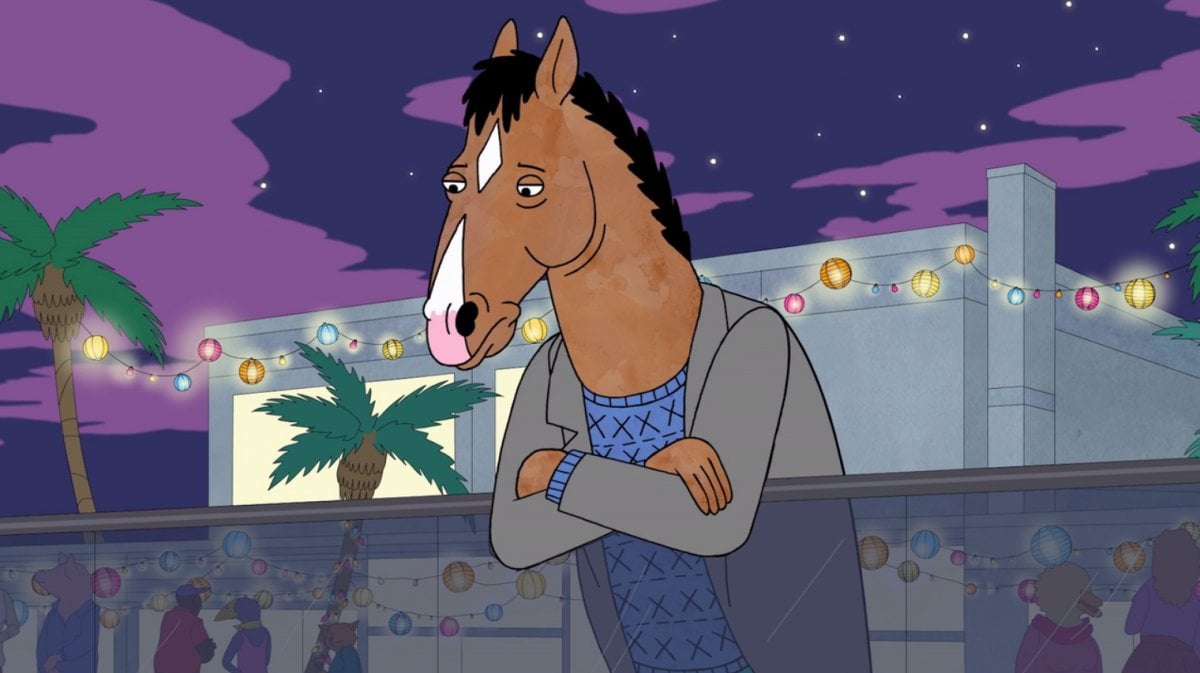 When it was first announced, Bojack Horseman looked like a bit of a routine sitcom. The jokes in the trailer for the first season weren’t particularly impressive, but the idea of an alcoholic horse trying to find a life after fame was interesting enough for me to watch the first couple episodes. These couple episodes quickly turned into a binge of the entire season. The writing improved each episode and with seamless transition, the show turned into an emotionally exhausting dramedy. The show doesn’t necessarily tell the viewer right away that they will become so heavily invested in a cartoon, but rather slowly lays the foundation of what will become the story of a self-loathing and self-destructive horse, that talks. This begins when Bojack meets with the ghostwriter of his upcoming autobiography, Diane. When she asks about his childhood, Bojack initially tries to to bury the subject by telling her there isn’t much to say, and that he had a normal childhood. The viewer then sees flashbacks of Bojack’s parents neglecting him and discouraging him at various times. These flashbacks tell us more about why Bojack is the way he is, but they’re also a turn in the tone of the show. Bojack is less of a selfish jerk and now more of a troubled has-been tormented by his past.

As the season goes on, the viewer learns about one of Bojack’s biggest regrets of his past, betraying his friend, Herb Kazzaz. With a friendship dating back to when Bojack was just a hack stand up comedian, Herb served as a mentor to Bojack. He helped Bojack work on his comedic timing, and got him his big break when he demanded that Bojack be in his new show, Horsin’ Around. During Horsin’ Around’s run, it was revealed that Herb was gay. Initially wanting to help his friend and stand with him, Bojack planned to tell the network he would leave if Herb was fired. However, Bojack was later convinced otherwise by someone from the network who catered to Bojack’s inner selfishness and need for attention. Bojack later went to seek forgiveness from Herb, and was denied it by an extremely resentful Herb, who was dying from cancer. This all happened on an animated comedy with anthropomorphic animals, and that’s the beauty of Bojack Horseman. It knows when to play its cards and when to hold them. The deep moments never feel forced and the jokes are a welcome relief to an overall depressing narrative. It doesn’t feel unwarranted when the first season takes a darker turn, it feels as if the first few episodes were lacking something, and this is that something. Bojack Horseman isn’t the funniest or deepest show out there and that’s fine, because it manages to have a unique blend of comedy and drama that hasn’t been done properly in a while.