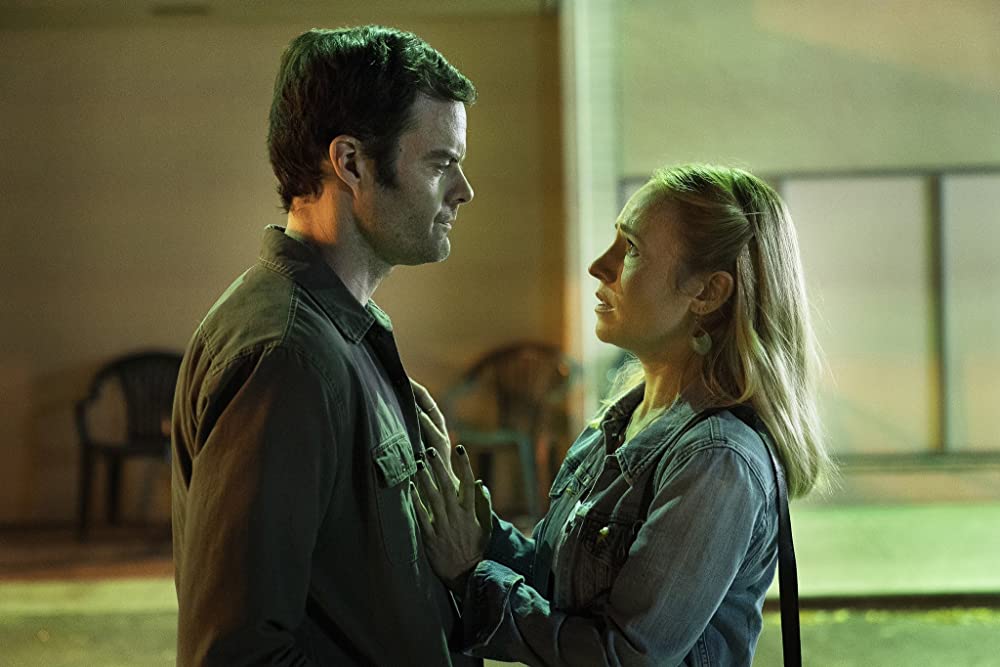 Barry‘s freshman season (one of Goomba Stomp’s top 10 shows of 2018, I might add) was a strong character study in the form of satire, a story of a man searching for help in a thoroughly helpless place. At their best, the first eight episodes of HBO’s dark dramedy were a portrait of depressive nihilism, featuring a particularly delusional cast of characters, in one of the more banal, hellish visions of Los Angeles on TV. It was a rather focused eight episodes, even with subplots involving Chechan mobsters and Marine hit squads, and built to a rather poignant, satisfyingly haunting finale. Two Emmys and ten months later, Barry returns with “The Show Must Go On, Maybe?” – and feels like a completely different show on arrival.

The most immediate change is how busy Barry suddenly is: NoHo Hank is running a criminal enterprise (with his Bolivian frenemies as co-owners), Fuches is fucking up his hit man business back in Cleveland, and Gene is reeling from the sudden disappearance/possible death of Det. Moss… did I mention Barry was also working at a Lululemon store? Where season one of Barry was a bifurcation of Barry’s life into two worlds, season two of Barry opens and suddenly feels much larger, its pieces – and attention – spread much thinner than it was in previous episodes.

Two Emmys and ten months later, Barry returns with “The Show Must Go On, Maybe?” – and feels like a completely different show on arrival.

Because of that, “The Show Must Go On, Maybe?” feels like a new show – Barry’s World, if I may. And on Barry’s World, there’s just a little bit less time for Barry. That means the central emotional swing of this episode – Barry struggling to reconcile his happiness, with the impending realization of what a monster he really is – doesn’t get a lot of room to breathe, leaning on a traumatic recollection to carry most of the load in the premiere. Part of this is expected; with Barry so focused on saving their terrible little stage show, it’s clear he’s trying to delay the inevitable breakdown he’ll face when he comes to terms with what he’s done to Gene (not to mention what he’s doing to poor Sally, whose selfish naivete is on full display here). And it never really returns to that final moment of season one, when Barry tries to reset the “good” clock on himself once again; the show’s single most powerful moment is but an afterthought here, while Barry simply tries to wish away all the awful things waiting just outside his door.

The last “starting…. now!” from Barry in “Know Your Truth” is the most powerful distillation of the show’s thoughts on identity: you can convince yourself over and over you are going to change, but you’re not. We are who we are, Barry says, and no matter how hard we try, we can only hold back our true nature for so long until we’re just lying to ourselves. There are glimpses of that in this episode – Barry thinking he can be a director, for one – but for the most part, there’s not a lot of convincing material Barry is really trying to be the guy he was for three off-screen weeks in last year’s season finale. “The Show Must Go On, Probably?” hints at that conflict a bit, but in its quest to move both vertically and horizontally in the space of 30 minutes, undercuts the end of season one a bit.

“The Show Must Go On, Probably?” is not completely absent of strong moments; Hank realizing his days in the sun as co-crime boss are most likely over, is oddly the best arc of the premiere. As a comedic device, Hank’s presence on Barry is critical – but his dramatic potential has always been limited by his proxy to Barry, where the premiere sets him free to his own adventures and conflicts. Naturally, this is going to fragment the storytelling of the show – but where I couldn’t give a shit less what is happening to Fuches in Cleveland (outside of the continued ineptitude Fuches shows), I’m interested to see what Hank does with the dangerous opportunity in front of him – as well as what happens when the facade of his bro-hood with Barry subsides, which we get a nice fat whiff of in the final minutes of this episode.

Unfortunately, growing the stories around Funches and Hank comes at a cost to other characters: while Barry’s decreased prominence is felt most acutely in this premiere (until we get that flashback scene, which was dark even for Barry), Sally and Gene also fall under the narrative knife in the season premiere. Gene’s pursuit of happiness was perhaps the single bright spot in the perpetually grim first season – and the severance of that leaves his character without much to do, except provide jumping boards for Barry’s stories to take off, like when Uncle Junior went senile in the later seasons of The Sopranos. Gene might not be a prime antagonist to Barry, but he’s the closest person to a family member he has in LA, the one person who sees through his bullshit and understands the truths Barry is seeking to find. With him buried in depression, he can only act as a spark for those stories, rather than a fulcrum; and that absence is felt deeply in this episode, especially when it suddenly reappears in the closing moments.

If there’s one character who could use some more life in “The Show Must Go On, Probably?”, it is Sally, who continues to be the most underdeveloped character on the show. Without Moss around, she’s really the only female in the lead cast, and it’s clear Barry has no idea what to do with her, other than as a device for Barry’s guilt, and a rather nasty portrayal of the superficial actress stereotype. It speaks to how good Sarah Goldberg is in the role of Sally, that we can actually feel any sort of empathy for her position (in a relationship with a manipulative psychopath); the banality of her self-centered behavior is so unflattering, and yet Goldberg is able to weave it into comedic gold, one of the best cringe comedy performances on television right now. Which is why I want more of her character; I’d trade every wrinkle of the mobster in-fighting stories for more time with Sally, but Barry‘s interest in her is mostly as a cipher for the themes of Barry’s story, not any particularly powerful arc of her own (at least, not yet).

The dichotomy between what works and what doesn’t in “The Show Must Go On, Maybe?” is almost deafening at times, the definition of an uneven opening episode. While it does feel like Barry will be doubling down on the tough internal conflicts of season one, the external machinations of plot and  character on display in this premiere are a bit unsettling; it would be disappointing to see Barry‘s eyes get too big for its own stomach, devolving into becoming exactly the kind of regretful assassin story so much of Barry‘s first season was reflecting on. There’s still plenty of time to right the ship, of course, but it is slightly disappointing to see 2018’s most promising new series return with an underwhelming premiere, one that really only begins to find its footing in the closing moments.

Game of Thrones Season Four, Episode 9: “The Watchers on the Wall” Review