Coming of age stories set in dystopian futures are all the rage these days. From the overly-popular The Hunger Games to Divergent and The Maze Runner, there’s no shortage of good-looking young adults being butchered whilst fighting the bleak systems holding them captive. For better or for worse, most of these books and films offer compelling settings and sociopolitical debates prominent in our society.

With its first season becoming available on November 25 on Netflix, the Brazilian thriller 3% is no different. Created by Pedro Aguilera and based on the web series of the same name, the show depicts a devastated Brazil void of the natural wonders the country is known for, more specifically the now-lush Amazon rain forest. The citizens of the Inland have to deal with poverty and lack of resources, whilst a select few get to enjoy the bliss of the Offshore, an island with advanced technologies and commodities. Upon turning 20 years of age, people from the Inland have a once-in-a-lifetime opportunity to be part of the beautiful and clean population from Offshore by going through a selection system known simply as the Process, of which only 3% of contestants succeed in every year. The show follows a group of such people, led by Michele (Bianca Comparato), as they go through the Process, coordinated by Ezequiel (João Miguel).

Although it offers a promising setting, the show struggles in a saturated market. The simple foundation leaves space to detail, but alas, the story and characters are constantly thrown around by the waves of inconsistency and poor direction. The plot brings nothing new to the genre, and unlike competitors, the world seems as shallow as its landscape, a factor that could perhaps be excused by the production’s low cost. That’s not to say the scenarios are poorly built, however. The Offshore facility where the majority of the story takes place may feel as empty as its surrounding wilderness at times, yet it makes proper use of modern Brazilian architecture, and the technologies found throughout its halls, albeit silly at times, are convincing. The limited use of computer graphics makes it easy to believe that the holograms and intelligent screens can be real, while occasional glitches and poor performance are a subtle reminder of the country’s current political situation. It is only odd that a society constantly fighting rebels is not equipped with proper interrogation rooms, seeing as most confrontation scenes against the Cause, the movement opposing the Process, take place in maintenance halls. 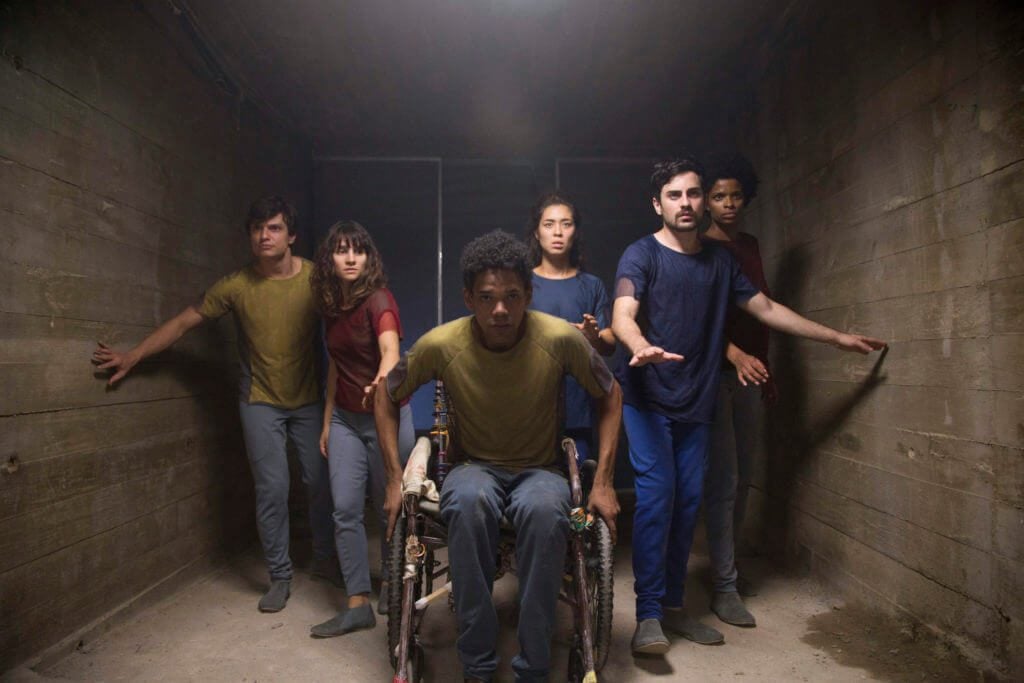 The plot is not the brightest facet of 3%. Shallow characters fail to remain relevant, mostly due to the robotic interpretations noticeable in consecrated actors such as Zezé Motta (Nair) and Sérgio Mamberti (Matheus). They often get lost in an extremely simple story that lacks consistency, with many claims being made and few being thoroughly explored, while the rest are poorly executed. A good example of this is the character Marco (Rafael Lozano), who’s part of a family known for always making it through the Process. The show makes it very clear that the Inland is the most miserable place on Earth, and yet Marco lives in a big house, wears the dirtiest of clothes, and is served by a maid. If everyone else in his family always manages to pass to the “better side”, why wasn’t he born there? And why is he so dirty if he lives in such a big house with a maid attending to him? These specific questions get a legitimate answer much later on, but the way characters react raises more doubts and makes the world of 3% far less believable.

Brazilian cinematographers aren’t much experienced with science fiction, as seen by natives in the telenovela trilogy Caminhos do Coração (lit. Pathways of the Heart, 2007–2009), a poor attempt at regular Brazilian romantic drama with elements reminiscent of X-Men and NBC’s Heroes. This lack of knowledge in the field and the fact that 3% tries to deliver philosophical arguments in a thriller format punctuated by unnecessary subplots (e.g. a unilateral romance that only serves to strip an interesting character from their purpose) is perhaps what hurts the show the most. A more carefully crafted script could easily make up for any other flaws.

As the first Netflix original entirely produced and filmed in Brazil, it probably had unrealistic standards to meet. The country’s lack of expertise in science fiction settings makes the pressure on 3%‘s shoulders all the more unbearable. It isn’t the worst of starts, but catering to what Brazilians do best – thought-out dramas about life in an emergent third world country – could’ve been better. What remains to be seen is whether or not the second season, confirmed on December 4, will manage to address such amateurism.