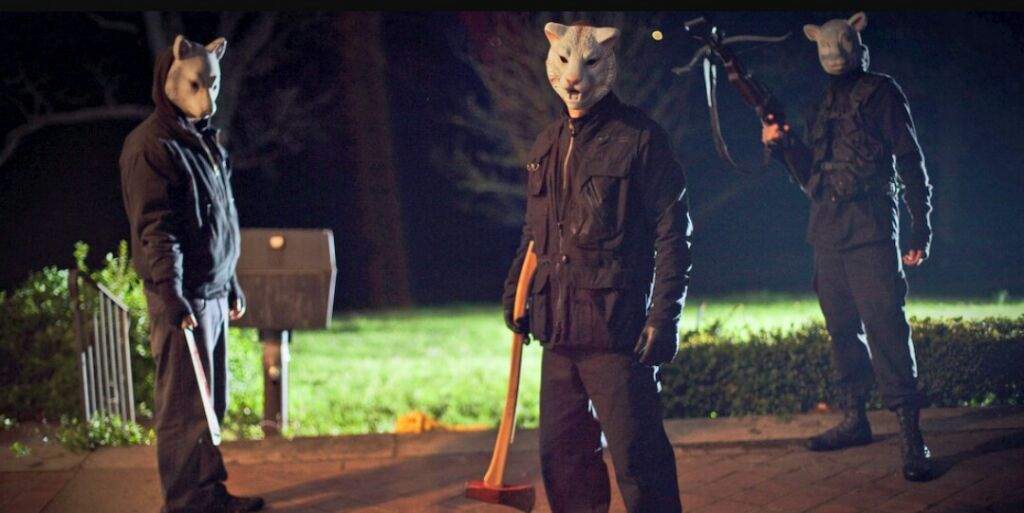 Filmmaking functions heavily in accordance with associations. When things go well on projects certain cliques form. For example, in comedy, there is the Apatow gang, featuring writer-director Judd Apatow and such actors as Seth Rogen, Jason Segel, Leslie Mann, and  Paul Rudd just to name a few. In the American independent horror film genre, there is the group comprised of writer-director Adam Wingard, writer-director-actor Joe Swanberg, actors A.J. Bowen, Amy Seimetz as well as arguably the most notable name of the bunch, writer-director-actor Ti West. Fans were in luck when the entire gang came back with the home invasion film You’re Next, the wait for which had been mind-numbingly long.

The plot of You’re Next is really quite simple. A family gathering is occurring at the new home, countryside bound home purchased by newly retired parents (Barbara Crampton and Rob Moran). Invited are all of their grown-up children (Amy Seimetz, A.J. Bowen, Joe Swanberg, and Nicolas Tucci) as well as their loved ones (Ti West, Margaret Laney, Wendy Glenn), the most important being Erin, A.J. Bowen’s girlfriend, played Sharni Vinson. The tension between certain members is already running high when a small band of heavily armed killers attacks their cozy domain, turning what might have been an annoying few days with the family into an absolutely hellish night, still with the family, but also trained psycho murderers.

As already alluded to, so far as a general plot is concerned, You’re Next never gets more complex than the above synopsis. However, Adam Wingard has bountiful surprises in store for the unsuspecting viewers, and even viewers who are intimately familiar with the director’s oeuvre and other entries in the genre, this latest kick at the can will certainly keep them on the edge of their seat with more than enough clever surprises. Guessing who might get their comeuppance next, how and courtesy of whom is completely up in the air to the extent that danger is not only imminent but could very well sprout from any direction whatsoever. The viewing experience is quite unique in that respect given that even though on the whole viewers are watching something familiar, they are also privy to something that feels new and fresh. One could compare the effect to the exported Korean films of the past few years, most of which took inspiration from basic genre tropes to create unexpectedly provocative pieces of cinema.

What is most striking about Wingard’s latest is how frequently it is able to slightly reinvent itself depending on what character motivations and capabilities are. What personal goals and storylines that are set up in the opening chapter are completely turned on their heads by the closing credits. No secrets shall be revealed, but suffice to say that there is very little that ends up bring is what it initially appears to be. The brilliant result of all these change-ups is that You’re Next evolves into something far beyond the run of the mill house invasion exploitation flick, all the while staying true to that premise throughout. More to the point, one specific character-centric surprise is played out to the most logical extent and adds a lot of fun to the horror. You’re Next never becomes an all-out adventure movie, nor a pure action spectacle, although there is an incredible adrenaline rush that kicks in shortly after director Wingard establishes the necessary dread.

Wingard is a more than capable director at juggling all the elements and so are his fantastic cast members. Whether they are among the very first victims of the cruel assault or they survive the duration of the picture, everybody is firing on all cylinders. Even better, the script and cast are talented enough to make every character feel entirely different and fully realized even though there can only be a certain amount of screen time allotted to each. Joe Swanberg, Sharni Vinson A.J. Bowen and Barbara Crampton are especially convincing and capable of altering their attitudes and motivations like a switch. Swanberg arguably earns the most laughs, having perfected the blueprint to playing the passive-aggressive, snotty brother who cannot help but make every attempt at putting his brother down. Even when apparently down for the count, Swanberg keeps on twisting the proverbial knife into Bowen’s wounds. Vinson, whose claim to fame in movies amounts to a role in the quickly forgotten Step Up 3D is genuinely charming and intelligent, not to mention a really fun heroine to tag along with.

You’re Next perfectly balances fun and horror, specifically dread. Make no mistake, this is not a mild scary movie that holds back on the violence. When things go down, and they do so often, it gets very, very messy. Even despite that, there is an unmistakable amount of glee emanating from the craftsmanship standpoint. The best part is, that glee is transferred over to the audience as well.

Shell and Joint is a Tedious, Overlong Experiment