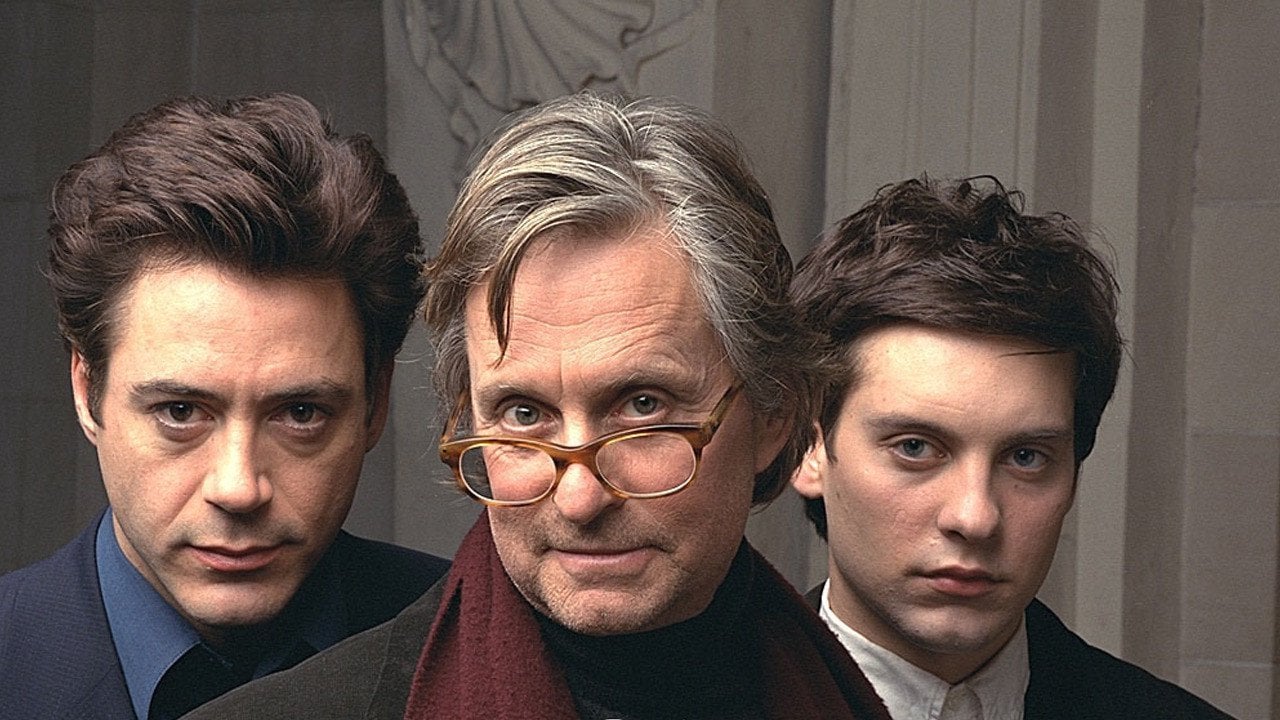 A joy of escapist fun when viewing cinema comes from being completely intoxicated by the tone and mood of a piece, wrapped in the emotion of the moment presented. While the classics may bring us to melancholy low or into the heights of adrenaline-pumping suspense, on occasion, it warms the soul to find a more laid back, comfortable experience akin to being wrapped in a blanket with a funny joke at the back of our minds bringing a constant chuckle and grin.

Such is the case with Curtis Hanson’s 2000 adaptation of Michael Chabon’s novel Wonder Boys, a dark comedy-drama of understated wit and occasionally hysterical farce. The film follows burnt-out author Grady Tripp (Michael Douglas), a dysfunctional lifestyle living former bright star now teaching creative writing at a university in Pittsburgh between unsuccessful efforts at wrapping up his second novel and pot-smoking sessions. His unfocused existence also takes in an affair with the married Chancellor, Sara (Frances McDormand), and resistant flirtations with his live-in student Hannah (Katie Holmes).

Mostly keen to be kept safely away from the seriousness of life, Grady is forced into action by a Coen-esque series of events when he reluctantly takes into his care another of his charges, the oddball James Leer (Tobey Maguire), after the would-be scribe is made homeless and then inadvertently kills a dog and more deliberately steals Marilyn Monroe memorabilia at a faculty party he crashes. Unfortunately, both belong to Grady’s boss, the head of the English department, who also just happens to be Sara’s husband. The same night also sees the arrival of Grady’s enigmatic editor Terry Crabtree (Robert Downey Jnr), desperately seeking a new tome to publish and the revelation that Sara is pregnant with Grady’s child.

This leads to a road trip in Grady’s battered, potentially stolen car with James, the dead dog, and the jacket, as the unlikely professor tries to both rescue James from his messed up circumstance and also sort his own life out. Read breaking into his ex-wife’s house, run-ins with a crazed relic of the ’70s, tribulations with hapless police officers, and the dawning understanding that nobody is really going in the direction they want to.

Given that Hanson is best known for his superlative noir thriller LA Confidential, Wonder Boys surprisingly holds up the same level of intertwining plot with a more languid and relaxed tempo, perfectly reflecting the protagonist’s unenergetic perspective. The result may be a slow and digressional narrative, but Stephen Kloves’ take on the novel is packed with enough wit and charm to make sure every beat is at the least enjoyable, at the best hilarious and effective. The humor is mostly wry and dry but is also open to occasional injections of throwaway slapstick and the double-take inducing bizarre.

The piece also works as a mellow character study for Tripp, an amiable figure stuck in a rut both professionally and in his cluttered personal life. That he cannot reach the end of his ridiculously long novel is a perfect mirror of his inability to find resolutions anywhere else, or really take a significant step towards any goal he may have. The slapdash events of the story act as a catalyst to really make him act, to break down the smoke-stained walls he’s built around him. Michael Douglas, playing decidedly against type, is a delight in the role he lobbied for, somehow both charismatic and worthy of light scorn. Given the film’s aimless plot, ensuring that the leading man was hugely engaging despite being lethargic was key, and Douglas pulls this off in one of the film’s biggest successes and the crux to it working so well.

Working with such excellent material the supporting cast also thrives and puts in their best work as veritably eccentric figures, notably Downey Jnr and Tobey Maguire. While the former is reliably fun and endearing, Maguire plays with his image as screen woobie and gives one of his best performances playing a clearly fragile young man in need of some resolute reassurance and probably a big hug. Often this characterization from the former Peter Parker comes off as irritating, but here it works in tandem with the story and he shares great chemistry with Douglas, making their interactions a source of much pathos and lovely repartee.

With a gorgeously shot setting of snowy festive season Pittsburgh acting as visual symbolism and a great soundtrack for the ages, the film is also aesthetically pleasing for those in search of a more laid back experience, one that meanders but ultimately does reach a satisfying conclusion that makes sense and averts the usual tendency to discredit in-universe authenticity. As the winding road ends, so does Grady’s literal odyssey. While ‘nice’ is probably the best way to describe it, such a piece would suffer from suddenly becoming ‘uplifting’ or ‘wonderful’.

The wonder of Wonder Boys, instead, lies in its charming and relaxed sensibility and immaculate comic timing, the funny joke and warm blanket, a cozy, memorably fun, and soothing place to be.