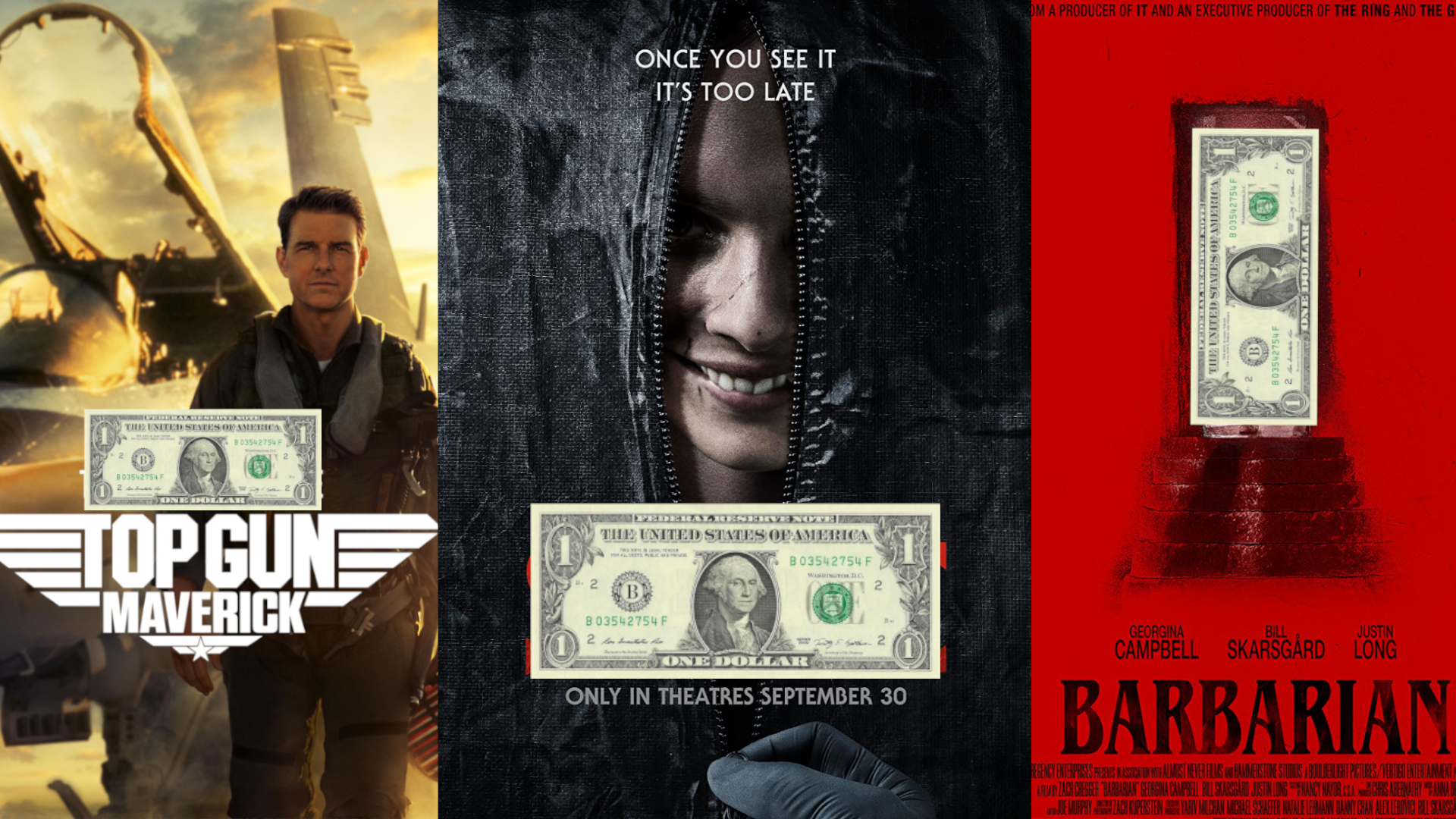 The theatrical release of Black Panther: Wakanda Forever is upon us and the instinctual reaction, apart from giddy excitement from a lot of fans, is that Ryan Coogler’s MCU sequel is the movie that will give life to the box office. That’s both true and untrue. It’s an accurate assessment insofar as, given Black Adam’s relative underperformance, it will be the first major release since the summer season to open well over $100M at the domestic box office. Estimates are that it will rake in at least $175M in its first three days (four with inclusion Thursday, Nov 10th). But it’s also false, at least from a certain point of view. At Tilt Magazine, we like taking a positive approach.

Of course, it should be noted there exists a plethora of variables that can be broached when engaged in a serious, detail-oriented discussion about box office earnings. Some films play on IMAX, others don’t. Some films cost $200M to create while others $20M. Then there is the percentage split on the price of a movie ticket between the theatre chains and studios. Said split shifts over time, with the studio taking in more money for the first few weeks, even the first month or longer until the share is equal. Finally, when a movie isn’t earning nearly as much because it’s nearing the end of its run, the theatre cashes in on most of the ticket price (and that’s why the popcorn and soda are so expensive. The more you know).

This discussion will simplify things for brevity’s sake. We’ll try not to oversimply them, but that’s a risk incurred.

At the tail end of 2021, outlets happily published that overall domestic earnings were up from a dismal 2020. Then again, that was always going to be a relatively easy hurdle to overcome given how historically bad 2020 was for obvious reasons. The total dollars spent on movie tickets domestically was $4.4B, up 91% from the previous year. Even with the caveat of a crippled 2020 box office, an 91% increase looks very nice.

It wasn’t all cheers and praise. The reality was that the $4.4B was down 61% from a record-breaking 2019 that saw people in the U.S. and Canada spend a walloping $11.39B on movie tickets. Thank you, Avengers: Endgame and Lion King remake.

In order to prepare for this article, the total figures (as of Monday, Nov 7th, 2022) of all domestically released movies were taken from The Numbers. When pasted into a rudimentary Excel spreadsheet, the tally stands at $5.6B. That’s already $1.2B more than in 2021, and the latter’s total was a sigh of relief for the industry. Consider that, at the time of this writing (Nov 8th 2022), neither Wakanda Forever nor Avatar: The Way of Water have opened. Thank you, Top Gun: Maverick.

Interestingly, the films that have sold at least $100M worth of tickets at the box office have tallied $3.6B, which is 83% of all 2021 earnings. That’s not too bad, realistically speaking, especially given to two aforementioned heavyweights still waiting in the wings. There’s little reason to suspect the major earners ($100M+) alone won’t leapfrog over the entire 2021 tally. At worst it will be a tight race.

A comment that has come up whilst reading the outlets and listening to entertainment business podcasts and YouTube channels is that the autumnal season has been weak for movies. Deadline’s Anthony D’Allessandro is a box office guru who tracks all sorts of domestic numbers, from per-theatre earnings, Cinema Scores, to social media hits, and weekend box office numbers. Anyone genuinely interested in the topic should read his Friday and Saturday articles. Excellent stuff.

Even in his weekly updates, there has been the occasional mention that things aren’t quite what they used to be. In his defence, he isn’t entirely wrong. September through October this year were not as strong as the 2019 barometer. The elephant in the room is of course Black Adam, which theatres and industry pundits hoped would be a saving grace in a season that had cooled off after a scorching summer. It opened well for a Dwayne Johnson film, taking in $67M. But given the herculean effort its star put into the hype machine and considering how other comic book films have fared on opening weekend, one would be forgiven for thinking $67M was merely good but not great.

The real story of the 2022 autumnal season is how smaller films, which had lower budgets than Black Adam, kept the industry afloat. This despite that it felt as though things weren’t looking good.

No, the argument does not include Bros. Even considering its modest production budget (where did the $22M go?), its $14M global earnings were poor. This is where the point requires some nuance. Up until now, domestic earnings have been discussed. As mentioned earlier, it simplified things. For this portion, the global earnings will be included. Why? Because the figures will show that there are more people, both locally and internationally, who showed interest in more modest pictures.

They weren’t all mega hits, to be sure. The Woman King, produced for $50M, has earned back $91M globally. It’s almost double the budget, but those figures don’t include marketing. For whatever reason, and this isn’t the time or place to get into the topic, it hasn’t been released in as many countries worldwide as one would have thought. It’s barely played in Africa at all, ironically. At least the data for those markets haven’t been disclosed.

Ticket to Paradise, the rom-com starring Julia Roberts and George Clooney, has tallied $137.5M off of a reported $60M budget. It only suffered a 14% drop from its 2nd weekend to its 3rd. That sort of staying power isn’t seen very often.

Even Don’t Worry Darling, which came under the harsh spotlight of controversy for all sorts of reasons, wasn’t the disaster some predicted it would be, having earned back $86M globally (reported $35M budget). Not great, but it isn’t as if everyone opted to skip it either.

Who should come to the rescue but horror films? They’re traditionally cheaper to make and when they play well, they do so to the delight of the studios that backed them. Let’s commence.

Barbarian was reportedly stitched together for the paltry sum of $4.5M and took in $43.5M globally.

Halloween Ends, another film mired in controversy albeit for what’s in the actual film, still crawled its way over $100M around the world off of a reported $30M budget. Evil never dies, apparently.

As has been on everyone’s lips lately, at least for those who pay attention to the figures, the runaway hit of fall 2022 is Smile. Made for a sensible $17M, the “little film that could” has tallied over $20M globally. Yes, $200M.

And lest it be overlooked, because heaven knows its fans are passionate, Terrifier 2, apparently costing only $250,000, has frightened moviegoers to the tune of $10M. Most of that is indeed domestic, however.

The Good, the Bad, and the Hopeful

There’s no use pretending that everything is rosy. Even with Wakanda Forever and Avatar: The Way of Water, it would be quite a feat for the 2022 total to surpass that of 2019. When the dust settles, 2022 may be viewed as a transitional year. A transition towards what? That’s the billion-dollar question.

Will it mark a transition towards future calendar years that more closely reflect the pre-pandemic successes? Perhaps. Streaming and the high-quality content on multiple services might have a thing to say about that, but the fact of the matter is the industry is on an upward swing.

Is 2022 possibly a transition toward a new middle ground between the pre-pandemic era and the “good but not great” figures of 2021? Clearly, people want to go to the movies. Otherwise, the numbers would be dropping rather than climbing. By the same token, there has been no shortage of high-profile films released theatrically and it doesn’t look as though 2022 will catch up with 2019. Perhaps the two remaining months hold surprises, but that would be one heck of a sprint to the finish line.

The boring answer is: we’ll know in 2023. One thing is for sure. Going to the movies is not dead. Not yet anyway. Long live the movie theatres.

Lincoln at 10: Portrait of a President as a Political Master