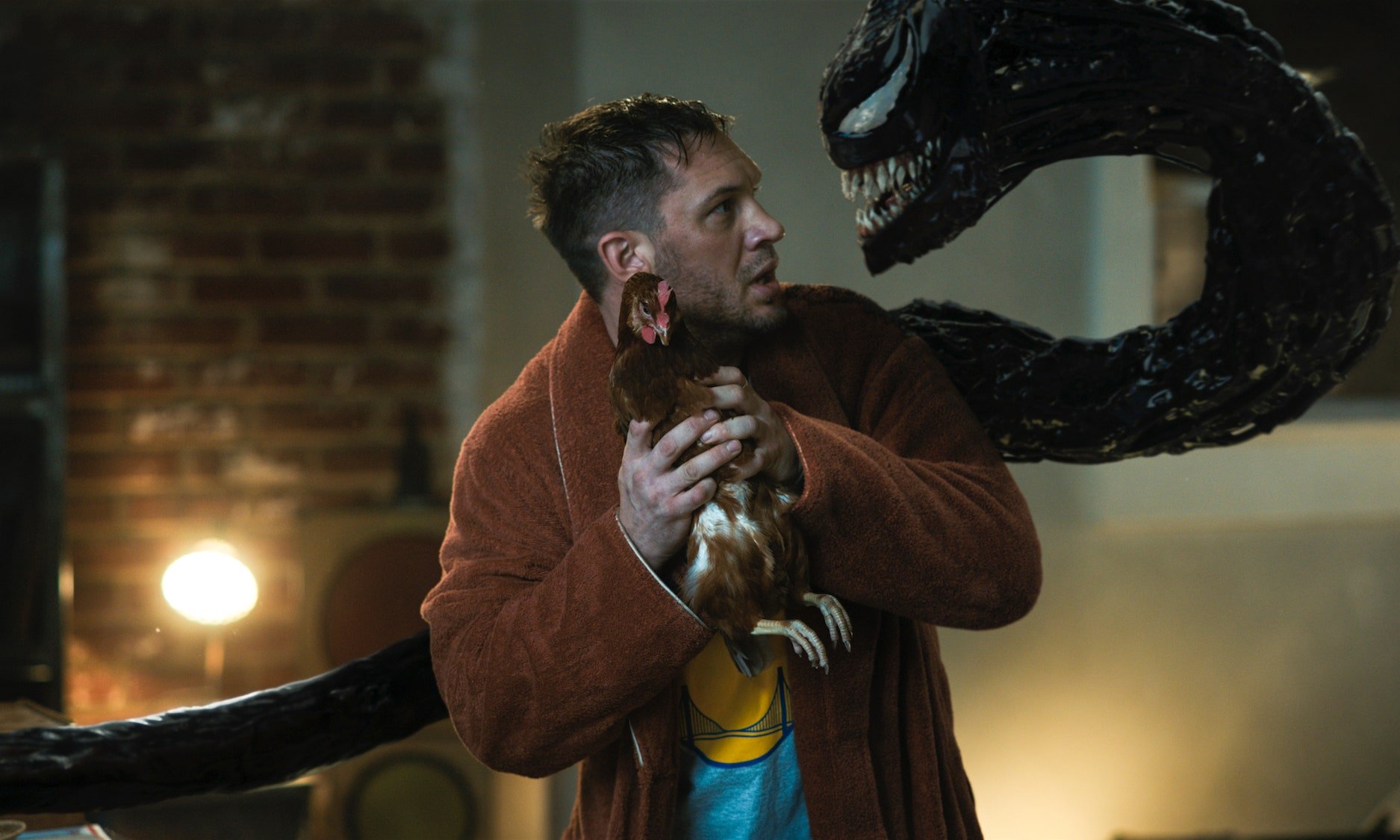 VENOM: LET THERE BE CARNAGE. (Courtesy of Sony Pictures Entertainment)

Make no mistake. Venom: Let There Be Carnage is a sickeningly slimy, overtly silly, scene-chewing mess of a film.

I have no doubt it will be one of the most questionable films you choose to watch this year, thanks to a zany premise more unhinged and uncaring than the first outing. Yet in a sea of mindless sequels and death-grip action formulas, this theatrical pile of flaming alien tentacles is smart enough to know exactly how bad it must look.

The sequel is in on the joke this time around and proud of its silliness.

The odds of this project succeeding were never high, so the Venom franchise changes the game and buckles down on the one aspect of the first film that had fans begging for more — the reluctant bond between Eddie Brock and Venom. Yes, by embracing the union between the kinky, tongue-flicking symbiote and Tom Hardy’s questionable American accent, this B-list film not only survives but thrives in the chaos of its own making.

It is almost impossible to watch the first Venom film and see the Eddie and Venom dynamic as anything other than a couple at odds with each other. This toxic romance was, for the longest time, one of subcontext and wishful thinking. Then Let There Be Carnage happened, and instead of a mindless action-comedy, I found myself in a couples counselling session pushed to the brink of insanity by Hardy’s insatiable desire to chew the plot into something we can digest.

By hindering the entire plot on these two beings learning to coexist, the whole thing plays out like a rom-com on steroids. I am not saying this mushy monster brawl is a well-executed love story, but the film does end with Eddie and Venom staring off into the sunset together.

A lighter tone certainly helps this theory. The symbiote/host dynamic could be a vessel for a variety of darker genres, but this film insists on wacky humour.

Every interaction between Eddie and Venom is eclipsed by non-stop assaults of bickering and manic voiceovers with side-splitting precision. Hardy’s involvement in the scriptwriting process manifests itself through hilarious physicality, as this off-kilter sequel leans on comedic beats to make Venom a likeable antihero. Underwhelming action sequences and one-note antagonists are all but invisible in the moments where the playfulness of this premise is the biggest obstacle our protagonists have to overcome.

There is something to be said about a film that gives its fans exactly what they want without hesitation. Not just because fanfare can lead to more fans enjoying a film but because sometimes what is best for the fans is also what is best for the project. A project that throws away the dark, brooding complex and embraces the batshit chemistry that put Venom in a position to warrant a sequel in the first place deserves praise, if only for avoiding predictability.

Michelle Williams’ Anne continues to be the franchise’s trusty compass.

One of the loveliest surprises to come of Venom was Williams’ well-developed female persona, so Let There Be Carnage doubles down on Anne’s awesomeness and enlists her help to help soothe Venom’s destructive tendencies. Yet, she continues to distance herself from Eddie romantically in a weirdly mature move for a movie about petty-ass aliens. The film even finds moments for Dan to shine before savagely pointing out his presence in the final battle is a huge hindrance.

In a male-dominated action film, it is reassuring to see the plot reiterate how much of a force Williams is on screen as this character and how imperative a voice of reason is amongst the carnage. Plus, Eddie relying on his ex-girlfriend and her new man to save the day makes for a fun dynamic on screen.

The over-arching plotline, however, is uninspiring and exposes many weak points the goofy sequel would rather sweep under the rug. That said, I can’t say Woody Harrelson is one of those weak points.

His villain, Cletus Kasady, is a one-note serial killer with over-the-top antics and an inability to go one scene without referencing the title of the film. Yet, none of this stops the versatile actor from going all-in on playing this surface-level antagonist to out-crazy Hardy. Cletus may be the byproduct of a script with severe peripheral vision, but the wacky showmanship is all Harrelson.

Venom continues to thrive in the superhero genre as an underdog cult favourite, and I have to think it is partially because the star-studded cast is having such a blast with this nonsense. Once you have dunked Tom Hardy in a lobster tank, the sky truly is the limit creatively.

Ultimately, it is the unconventional runtime that allows this elaborate joke to survive its predictably safe showdown.

Let There Be Carnage acknowledges that there is only so much of this premise the audience can stomach and crafts a fast-paced story that gets straight to the point. No need for Cletus to rip apart three more mental institutions before Eddie brings him to justice. Less is more, and this antihero rom-com gives us plenty during its short stay.

In the end, not everyone will enjoy this film. I am still wildly unsure if I enjoyed this film. However, no one can deny this weird little alien romp did exactly what it was supposed to and looking around at moviegoers drunk on the bliss of that rare messy theatre experience, it seems no one is terribly upset to have wasted their time on this tentacle porn-fest of a film.

So, if there is any project this year to understand the assignment, it has to be this strangely self-aware sequel.

The cherry on top of this surprisingly breezy film is a post-credit scene that comes out swinging.

After months of speculation as to what a spidey-verse will look like in Spider-Man: No Way Home, this scene brings Venom to Peter’s front doorstep in a flashy display of chaos magic. It certainly does not disappoint as Venom comes face to face with Tom Holland’s Peter Parker for the first time in the MCU and acts as he tends to do with that dirty tongue of his. In a word, it is iconic.

It is a worthwhile treat for Marvel fans willing to embrace Sony’s weirder properties and head to the movies. Even if you have spoiled this one for yourself, I suggest going just for the theatre experience. There is nothing like hearing the buzz of a satisfied audience become an uproar of shock as everyone collectively loses it.

This end credit scene is a selling point for the film itself, but as I said, this trite alien tale has more than enough perks to make the journey as memorable as the destination. A fact that will make Venom and Spider-Man’s first meeting all the sweeter to watch as this property turns the MCU’s weird factor up to an eleven.

Sorry to say, Peter won’t know what hit him. I certainly didn’t.