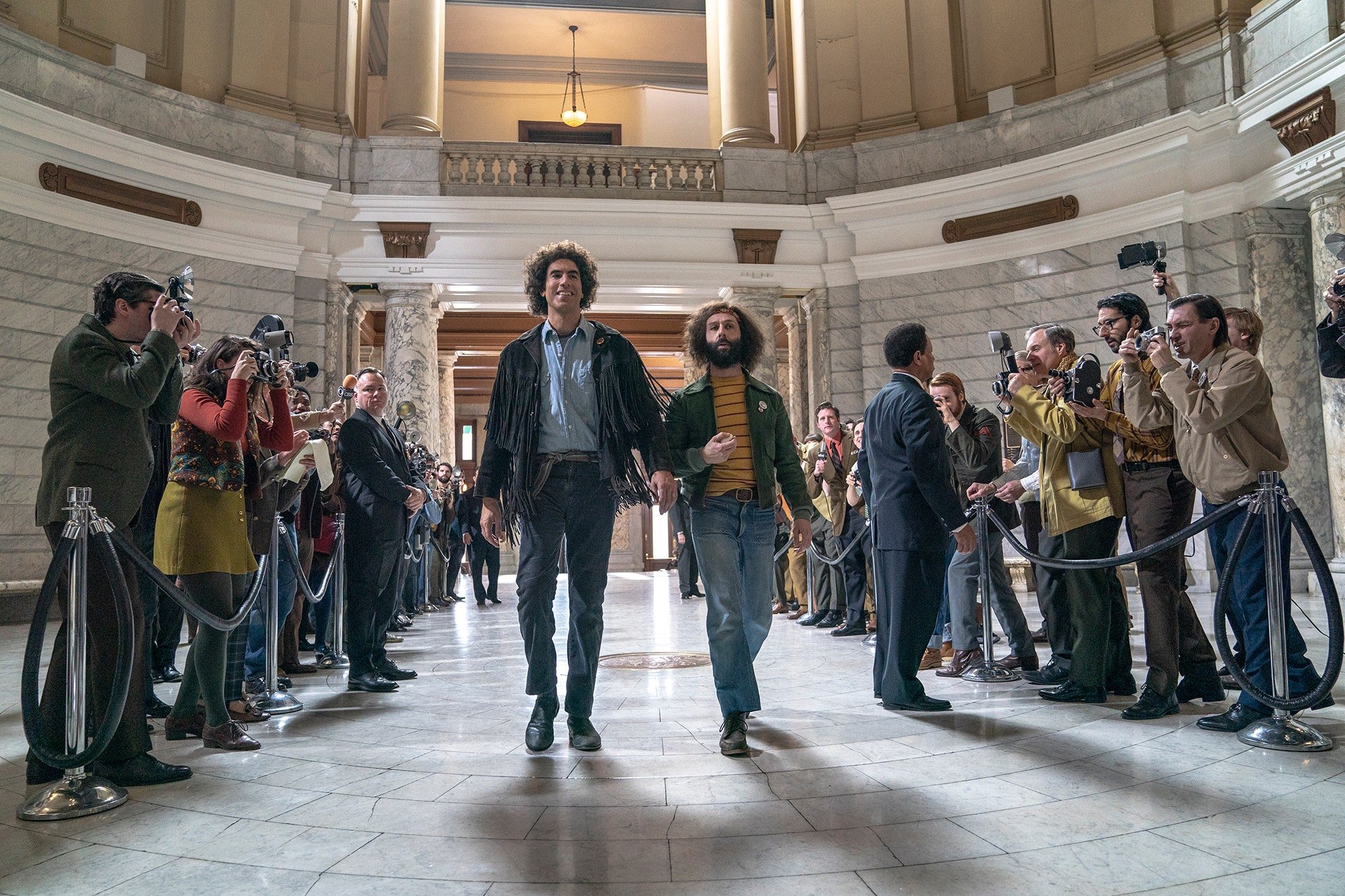 Aaron Sorkin has never been shy about his politics. He’s always favored moderation and decency in place of passion and conviction, and though he’s center-left, he’s much closer to the center than to the extreme. That was most evident in The West Wing, and later, The Newsroom, where Martin Sheen and Jeff Daniels both seemed to spout out his most unvarnished opinions. So, it was strange that he finally made his directorial debut in 2017 with Molly’s Game, a mostly apolitical crime drama about an illegal gambling ring. Now Sorkin is on more solid footing with his sophomore feature, The Trial of the Chicago 7, about the group of anti-Vietnam War protestors who were charged for trying to incite riots. Now that he’s working with an unabashedly political subject and back in the courtroom-drama mode that worked so well for him in the past, he seems to have regained some of the inspiration that was missing in recent projects. But even as his screenplay is better than they’ve been in a while, his work as a director isn’t up to snuff.

Like most historical drama, Sorkin takes the montage route to open The Trial of the Chicago 7, mixing in documentary footage of Lyndon B. Johnson with the war in Vietnam and film of draft boards selecting the next young men who will be shipped off to war, which will likely be completely alien to younger viewers. The American chaos is leading up to the 1968 election, where Hubert Humphrey was selected at the Democratic National Convention in Chicago to run against Richard Nixon. Humphrey was a consensus candidate without much of a consensus, as most Democratic primary voters opposed the war and voted for Eugene McCarthy or Robert F. Kennedy, but after Kennedy’s assassination, the party selected Humphrey, who supported continuing the Vietnam War, as the less-radical option. Nixon went on to trounce him by winning 32 states.

Sorkin intercuts his own footage into the montage to introduce the various groups represented in the Chicago 7. Tom Hayden (Eddie Redmayne) and Rennie Davis (Alex Sharp) run Students for a Democratic Society (SDS), a strait-laced group looking to protest at the convention because of the likelihood that Humphrey will be nominated. Abbie Hoffman (Sacha Baron Cohen) and Jerry Rubin (Jeremy Strong) take a more anarchic, confrontational approach to protesting the war as members of the Youth International Party, or Yippies. David Dellinger (John Carroll Lynch) comes from an older generation and is a pacifist to his bones. Although Sorkin calls the group the Chicago 7, it was originally the Chicago 8. Bobby Seale (Yahya Abdul-Mateen II), National Chairman of the Black Panther Party, was at first part of the group, despite having the most tenuous connection to the protests before his trial was severed from the others.

After the montage, the film jumps to 1969, when Richard Schultz (Joseph Gordon-Levitt) has been instructed to prosecute the eight men for supposedly leading the riots surrounding the ’68 Democratic Convention. The great Mark Rylance is William Kunstler, the council for the defense, who bears the shaggy hair of the era and is sympathetic to his clients’ anti-war beliefs. Although Sorkin makes it clear that the trial was a sham from the start, as the previous administration had determined that the riots were started by the cops and not the protesters, it’s not obvious just how much of a show trial it is until Judge Julius Hoffman (an excellent Frank Langella) takes to the bench. He’s has a formidable combination of incompetence and maliciousness, as his inability to remember the defendants’ names and his eagerness to slap them with contempt charges shows.

Sorkin is great at creating compelling material out of what would have mostly been a boring trial, but he can’t seem to do it without reshaping the defendants in his own image. Baron Cohen is the most compelling of the actors, but Sorkin puts lines in his mouth about respecting democratic institutions that aren’t in the court transcript and bear little relation to Hoffman’s beliefs. He seems to have given most of the anarchic comic energy to Hoffman, so Rubin is left with an invented plot in which he falls in love with an undercover FBI agent (Caitlin FitzGerald). Still, as much as Sorkin feels the need to sanitize Hoffman and his colleague, he’s ultimately the one the audience is most able to respect in the end. Redmayne does his best to make Tom Hayden a noble figure, but his commitment to politeness and rule-following isn’t justifiable when it’s in the service of following the corrupt Judge Hoffman’s rules. He comes off as a cold fish, which is appropriate when comparing him to the hot-blooded Hoffman, but I don’t that was Sorkin’s intention.

Despite how he plays fast and loose with the historical record, Sorkin is a master of dialogue and snappy replies — it’s the directing where he falls short. Despite having worked with great filmmakers for decades, he hasn’t developed a visual style of his own yet. There’s never a composition that draws your attention to the screen, and everything looks as if it’s painted over with a coat of gray. Since most viewers will be watching this on Netflix in the comfort of their homes, rather than seeing it in a theater, it’s possible many people will be struck by the urge to browse on their phones while simply listening to the movie; if what’s on-screen is so inspiring, why even bother paying attention? Directors are also responsible for coaching great performances from their actors, and while he’s able to do that with Baron Cohen and Rylance and Abdul-Mateen, he can’t get Redmayne to stop looking like a cardboard cutout of a human. The Trial of the Chicago 7 even suffers at the level of the score, by the usually reliable Daniel Pemberton, which is often completely wrong for the film’s tone and adds cloying sentimental notes when something darker is required.

The Trial of the Chicago 7 is a considerable improvement from Sorkin’s last film, Molly’s Game, and it suggests he does his best work when he’s not straying too far from politics and civics. He may make a great film from the director’s chair someday, but for now, his true talents are hidden away on the page.

‘Time’ Is One of This Year’s Must-Watches