Connect with us
Tom Watches Movies

One of the qualities that tends to separate Asian and Indian cinema from its North American and European counterparts is a much more fluid approach to genre. In the West, genres tend to be approached as almost monolithic structures with fairly rigid delineations. Even when you get hybrids like horror comedies, it’s usually clear that one genre in particular is in the driver’s seat, and the other is just along for the ride. But all of this goes out the window somewhat in other parts of the world. Bollywood films, for example, tend to try to cram as many genres and moods into a given film as possible, liberally mixing action, comedy, romance and more. Chinese cinema has some similar tendencies, especially when it comes to comedy and adventure movies. Watching some Chinese films, you never quite know where the mood will shift to next, and a tendency for absurdism works together with this to make for some truly baffling pieces of entertainment.

Behold, then, The Seventh Curse, a 1986 Hong Kong film that combines elements of horror, comedy, romance, jungle adventure, action, creature feature, cop movie, and more into one brisk hour and a half package. The film is an adaptation of author Ni Kuang’s Dr. Yuen series of novels, which see an adventuring doctor embroiled in numerous strange adventures. Think Indiana Jones, but weirder and with more martial arts. The Seventh Curse brings Yuen to the jungles of Thailand in search of a cure for a blood curse placed on him in a previous adventure. Along for the ride is a dyed-in-the-wool “spunky girl reporter,” and Yuen’s mentor, Wisely (who has his own series of novels), played by guest star Chow Yun-fat.

Speaking of which, the film features a surprising amount of star power. Star Chin Siu-ho had already made something of a name for himself by this point in a few Shaw Bros. productions, and the female lead is played by Maggie Cheung, though this was well before she became Hong Kong cinema royalty. Of course, they get considerably more screen time than Chow Yun-fat, who only has a couple of scenes.

So genre, then. The Seventh Curse is all about playing around with as many genres as it can, which could easily make viewers new to this sort of thing unsure about what kind of movie they’re actually watching at any given time. The film opens with a shoot-em-up police action sequence, before shifting into horror territory as Doctor Yuen’s opponents go from criminals to monsters. It’s almost like Curse starts off as a John Woo movie, before getting handed off to Frank Henenlotter. One minute it’s shootouts in a warehouse, and next a creature out of Basket Case is drinking people’s spinal fluid. The gore effects are copious and gleeful, which it isn’t surprising seeing that this comes from the same director as the notoriously over-the-top gorefest Riki-Oh. It’s also a “Category 3” movie, the Hong Kong equivalent of 18 plus, meaning in addition to violence, there’s a sprinkling of sex and nudity. 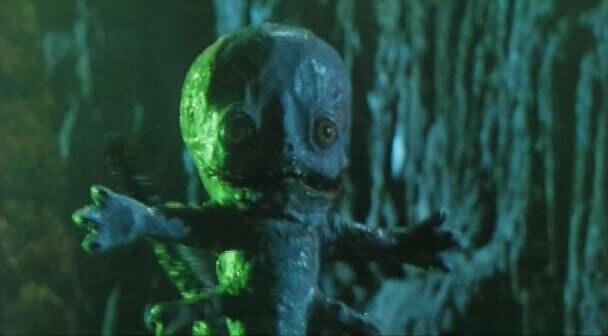 But more than gory, action-packed and occasionally lascivious, The Seventh Curse is just plain weird. The creatures that Yuen and his co-horts come up against are ostensibly presented as being part of Thai folklore and witchcraft, but it’s more than likely that most of it is just made-up strangeness with some cultural trappings tacked on to add a sense of legitimacy and otherness. Looking at it culturally, it’s not hard to see The Seventh Curse as fairly exploitative, with the threateningly foreign baddies thwarted by a team of attractive, dashing local heroes.

But who has time for reading that deeply into a movie like this? No one’s here for a deep analysis of The Seventh Curse‘s cultural chops. We’re here to see Chow Yun-Fat appear out of nowhere and shoot a demon with an RPG. We’re here for weirdness, for gore, and for rousing action scenes, all of which the film delivers on with gusto. It’s the kind of experience that you want all b-movies to be — one of constant surprise and confusion at just where this crazy ride could take you next. The Seventh Curse is weird and crude, gross and tasteless, silly and shocking, but God is it fun.