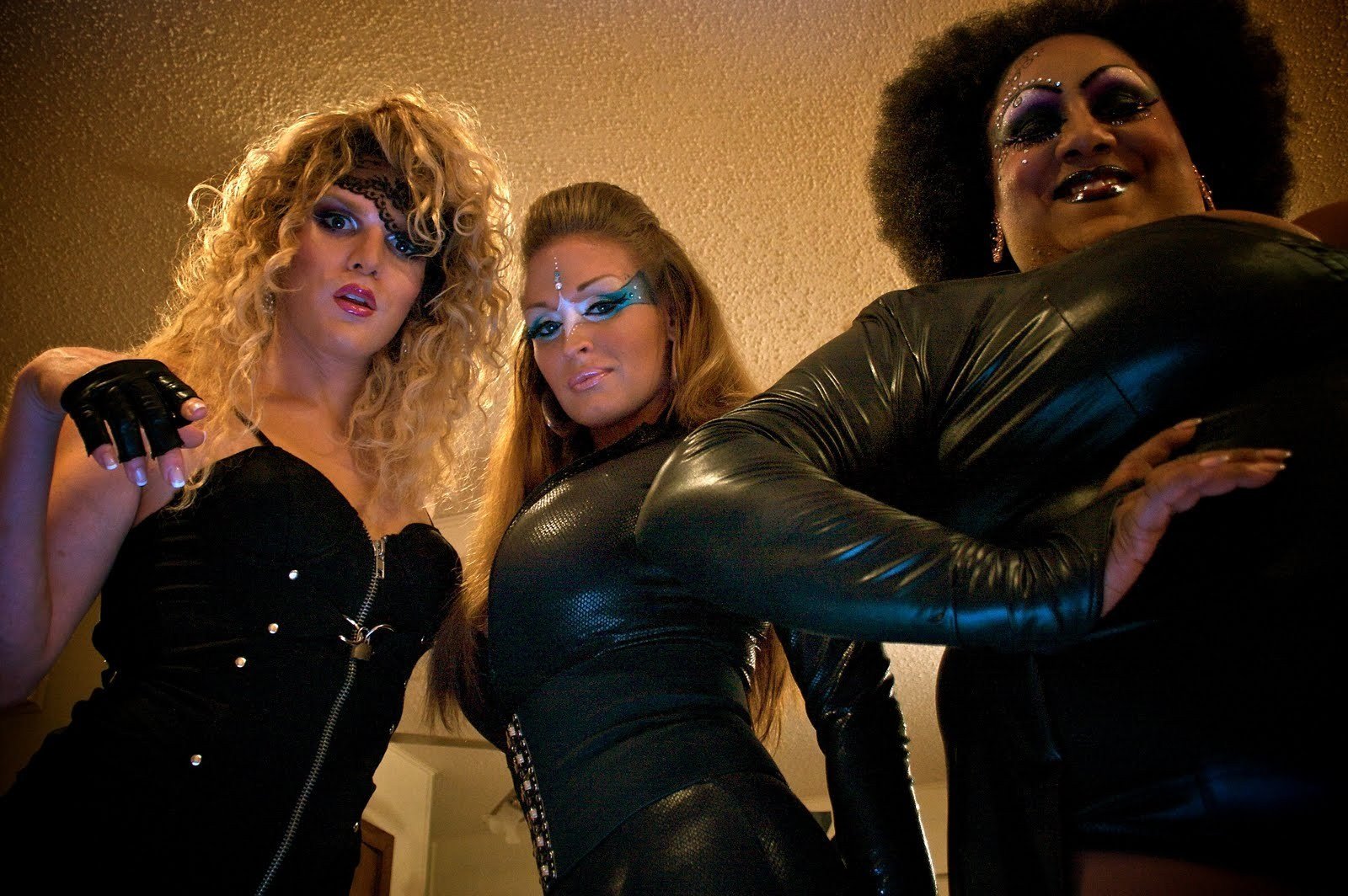 Ticked-off Trannies With Knives is just one of many films in the self-explanatory transploitation sub-genre. Described as a “campy homage to the exploitation films of the past,” a group of transgender women is violently beaten and left for dead, only then the violated vixens turn deadly divas and seek their revenge.

If you’ve seen a lot of exploitation cinema, then you know what to expect; I Spit On Your Grave quickly comes to mind. Trannies is a rape-revenge movie that sees a group of witty, funny, and ultimately sympathetic transgender-Americans fighting back – but don’t be fooled. Unlike Spit, Trannies is not a horror film or thriller by any means. Think instead of Russ Meyer on the set of Paris Is Burning. Trannies is a cross-gender comedy/bloodbath overplayed, and purposefully so. A film whose motto is, “girls just want to have fun” or in this case, men in drag. And there lies the problem. Ticked-Off Trannies With Knives tries to succeed as a comedy while making a statement about something as solemn and unfunny as anti-transgender hate crimes. The director is clearly undecided about what he wanted to accomplish and Luna’s attempt to meld these completely and entirely contrary elements into the same film results in nothing short of failure.

In the past, exploitation directors deliberately produced films that would shock audiences, in order to capitalize on the controversy. It’s quite a difficult task to shock today’s audience and few filmmakers actually succeed, yet somehow Trannies did set the entire GLBT community in an outrage. Not because the film is shocking or graphic, because it’s not. There’s hardly any blood and gore and when there is, it’s cartoonish and unkempt. But the explicit, bloody hate-motivated violence ruins whatever comedic effect the film might otherwise have had. Hate crimes, after all, just aren’t funny, and including graphic depictions of anti-transgender violence in a movie that’s clearly being played for camp and comedy comes off as complete ignorance. These incongruous, comedic scenes only serve to undercut and completely discredit whatever message the director would have hoped to convey.

Oh, and did I mention that the title of this film is misleading? This isn’t a movie about transgendered women at all. It’s a movie about drag queens, as it makes it quite clear who’s packing what and it’s not entirely sure if director Israel Luna even knows the difference.

The production values are deliberately and appropriately horrible. The film is artificially aged and made to have a look similar to the exploitation films of the early 70′s, complete with missing reels, cigarette burns, cheesy title cards, and scratches on the print. Conveniently, Luna also avoids scenes that demand a bigger budget, action set pieces, and special effects by claiming to have misplaced a reel. Scenes take too long to play out, the action sequences tend to drag and Trannies amounts to a lot of unpleasant dead air. Not to mention that Trannies never looks like it was shot on film but rather cheap video. The problem is Luna, who should have taken influence from the likes of John Waters, Roger Corman, and Russ Meyers, but instead rips off everything that made the Tarantino-Rodriguez Grindhouse project fun but manages to get it all wrong.

The first twenty minutes of Trannies is entertaining. The cast of admittedly amateur actors carry on some witty back-n-forth banter and deliver some incredible one-liners. Anyone who’s ever spent time with drag queens knows just how funny and charming they are. Unfortunately, these ladies fall victim to amateurish filmmaking, substandard effects work, flagrant butt-hole abuse, and an all-too-familiar premise. Luna’s sendup/homage of ’70s-exploitation movies just isn’t very good.

‘A Thousand Cuts’ Urgently Highlights the Need for a Free Press