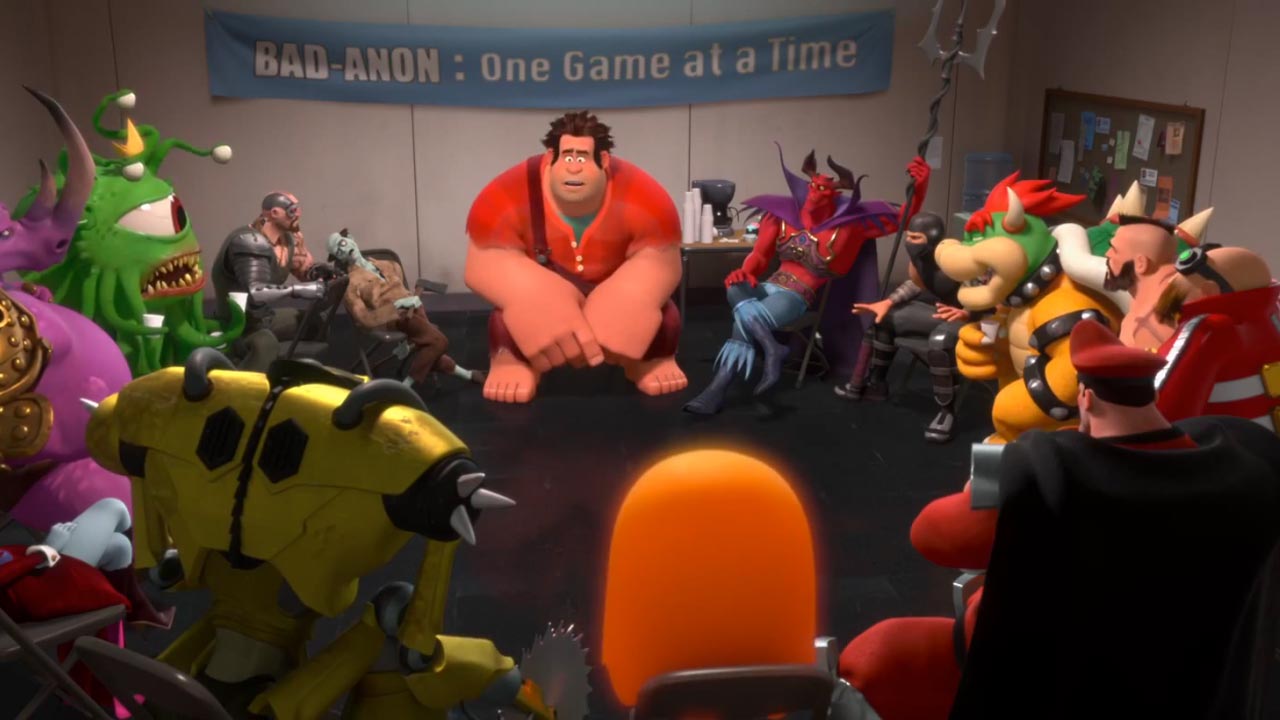 What is Wreck-It-Ralph Really About?

“There is a crack in everything
That’s how the light gets in.” -Leonard Cohen from his song Anthem

At the heart of Wreck-It Ralph is a Taoist parable about the usefulness of uselessness that adds unexpected depth to what at first blush could appear to be a simple, funny animated film trading on nostalgia for old video games.

The simple moral on the surface of Wreck-It Ralph is that Ralph (John C. Reilly) has been the wrecking bad guy in the “Fix-It Felix Jr.” arcade game for 30 years. Ralph abandons his game in search of external validation (a shiny gold medal from the modern high definition first-person shooter game “Hero’s Duty”) but learns during his Hero’s Bad Guy’s Journey that the only validation that matters comes from within, or as Zombie (Raymond S. Persi) puts it during Ralph’s Bad-Anon meeting, “You must love you!“

On a deeper level, Wreck-It Ralph is an environmental story. The opening screens to the “Fix-It Felix Jr.” game reveal that Ralph originally lived in a forest inside a hollowed-out tree stump, until Ralph’s forest was bulldozed and his stump uprooted to make way for the apartment building that Fix-It Felix Jr. (Jack McBrayer) repairs. Seen in this light, Ralph is not so much a destructive bad guy as an elemental force of nature reacting to the opposing force of civilization, the green root that bursts through the asphalt that “paved over paradise“. The Cy-Bugs from “Hero’s Duty” are the dark mirror of Ralph’s nature, unrestrained destruction that burst up from underneath, consuming everything in their path.

As an avatar of Destruction, Ralph has a lot in common with the Neil Gaiman character from his Sandman comic series. The main characters of Sandman are a family of seven siblings called The Endless who personify natural forces: Dream (the main character), Death, Despair, Desire, Destiny, Delight Delirium and Destruction. Like Ralph, Destruction abandons his post, leading to an avatar of creation (Dream instead of Felix) to leave his castle and go in search of his brother. This search does not end as happily for Dream as it does for Ralph and Felix, because Destruction believes that with the invention of the atomic bomb, mankind has become its own avatar of destruction (“Now, I am become Shiva, the destroyer of worlds!“) making him superfluous.

As an avatar of Destruction, Ralph has a lot in common with the Neil Gaiman character from his Sandman comic series.

Ralph is able to find purpose in his life because of his connection with Felix, but, before the two men can reconcile, Felix must learn that his ability to fix things can be destructive (“Why do I fix everything I touch?” Felix wails in the “Sugar Rush” Fungeon) and Ralph must learn that his destructive ability can save the day. In other words, Ralph must find the light inside his darkness and Felix the darkness inside his light or as Taoists would describe it their Yin and Yang.

Felix without Ralph has nothing to fix and will inevitably result in their game being declared out of order and unplugged. Ralph without Felix will eventually run out of things to destroy and will also inevitably result in their game being shut off. This is why Gene (like Zombie played by Raymond S. Persi) rejects Ralph when he returns to the “Fix-It Felix Jr.” game with his “Hero’s Duty” medal, but without Felix. The “Hero’s Duty” medal gives Ralph the keys to the penthouse, but not happiness and in the end Ralph chooses his stump (and Felix) over the penthouse.

It’s appropriate that Ralph lives inside an ugly tree stump which was uprooted by the bulldozers, but dumped in the garbage (so that Ralph could continue to use it as his home) rather than used to make the apartment building. The Taoist philosopher Chuang Tzu used to tell a parable about an ugly oak tree that a carpenter refused to cut down because it was useless, “Look at its wood: it’s all worthless timber. A boat made of it would sink, a coffin would rot, a tool would split, a door would ooze sap and a beam would have woodworm. That’s why it has been left alone, because it’s useless.” Except as Chuang Tzu pointed out, because the tree was useless, it was not cut down allowing the tree to grow and live without the fear of the carpenter’s axe. Which in turn allows it to provide shade, making its uselessness useful both to the tree and to others.

The character in Wreck-It Ralph who best exemplifies the useless/useful ugly tree is Vanellope von Schweetz (Sarah Silverman) who is shunned by the characters in “Sugar Rush” because she’s a glitch and kept from racing by them because they fear that if players see her “glitching” than the game will be unplugged. Vanellope is able to recognize Ralph’s useful/useless ugliness, “Why are your hands so freakishly big?” not just in who Ralph is, but in what Ralph does. When Ralph destructively blunders his way through the “Sugar Rush” mini-game to build Vanellope her car, Ralph is appalled at the ugly car he builds, but Vanellope only cares that it is a real race car that belongs to her. In the same way, Vanellope embraces her glitchiness, finding a use in what makes her useless.

If Vanellope and Ralph bond over their shared ugliness, the other couple in Wreck-It Ralph – Felix and Sergeant Tamora Jean Calhoun (Jane Lynch) – bond over their differences. Calhoun’s heart is hardened against falling in love: she is “programmed with the most tragic backstory ever,” losing her husband on their wedding day when he was eaten by a Cy-Bug. Felix wins mends Calhoun’s heart not by demonstrating that he is her equal in strength or destruction, but that he is her opposite – that he can take any punishment that she (or by extension the Cy-Bugs) can dish out and bounce back smiling.

The other dark mirror to Ralph is the ruler of “Sugar Rush”, King Bilko Candy (Alan Tudyk) aka Turbo. Like Ralph, Turbo has been game-jumping in search of fulfillment, but Turbo’s path to happiness involves twisting the truth to his own ends. Ralph attends a Bad-Anon meeting modeled on programs for addicts, but Turbo is the real addict, tampering with the raw code of the “Sugar Rush” game, distorting the world around him, the people around him and his own form, changing his face and shape like a plastic surgery addict. While unstated, there is a sense that Turbo’s code manipulations started small and continued to escalate, first making himself King Candy, which led to the need to remove Princess Vanellope from the game, which led to the need to lock up the memories of the “Sugar Rush” characters, which led to the need to maintain the artificial status quo, because a game reset would restore Princess Vanellope and undo Turbo’s unstable kingdom.

Where Ralph is an agent of constructive anarchy, Turbo is an agent of destructive stasis, trying desperately to maintain the status quo no matter how destructive that is. In the climax of the film, Ralph’s two dark mirrors, the Cy-Bugs and Turbo unite into one monstrous creature, an agent attempting to impose a status quo of continuous destruction. The only way for Ralph to defeat the Turbo Cy-Bug is to accept his nature: dark and light; good and evil; destructive and constructive, “I’m bad and that’s good. I will never be good and that’s not bad. There’s no one I would rather be than me.” It is only by accepting and embracing the crack inside himself that Ralph is able to create find the crack in everything and let the light in, creating a moment of destruction so powerful that it attracts the Cy-Bugs (and Turbo Cy-Bug) to their death, to become so destructive that Wreck-It Ralph becomes useful in his uselessness.