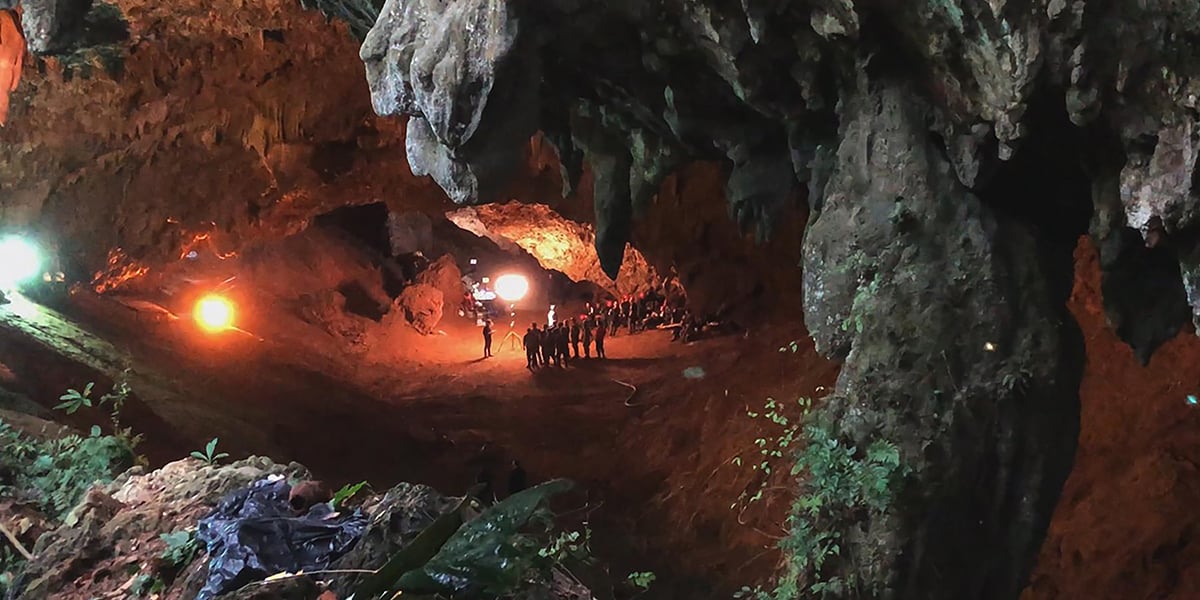 There is perhaps no better subject to follow-up their 2018 Oscar-winning documentary Free Solo than a group of hobbyists becoming unlikely heroes in Elizabeth Chai Vasarhelyi and Jimmy Chin’s The Rescue. When the hobby is cave diving though, it asks so many more questions of the individual, which Chin and Vasarhelyi do, expanding upon their interest in people performing incredible feats that require courage, dedication, and patience. Meanwhile, with astounding footage and a detailed breakdown, The Rescue also encapsulates an international effort to save a Thai soccer team trapped in a cave with only a few specific individuals capable of performing a successful rescue.

Even those barely paying attention have likely heard of the Thai soccer team of ten boys and their coach that became trapped in the Tham Luang Nag Non cave in Thailand. Monsoons flooded the area, effectively blocking the cave system from any normal means of exploring. Instead, the only way through was diving – a practice which most are not prepared to do, especially in the tight confines of a cave. There are only a select few who do this and what The Rescue reveals is that a large portion of cave divers do this as a hobby.

While at the heart of the film is its focus on the cave rescue and the logistics involved to complete such a herculean task, equal emphasis is placed on those select individuals and what makes them so capable of doing this job versus everyone else. There’s a mental component that Chin and Vasarhelyi explore in great detail, trying to get into the psyche of each diver and see what the common thread is between them. The same applied to Free Solo, and because of that extra effort, the film has a level of understanding that makes all of the thriller elements even more suspenseful.

In addition, The Rescue puts this single incident on a larger pedestal. This isn’t just a couple of people from out-of-town coming to rescue a children’s soccer team. These are the best of the best-joining forces from around the world to complete a near-impossible mission. With an extraordinary outline of what needs to be done and how much room for error, there is, every small victory is met with excitement – while every setback feels like the end of the world. If this group of extraordinary individuals can’t save this group of kids, there’s no hope.

The Rescue is often stressful, but it also has a giant heart that heightens the tension. Seeing some of the raw footage from the rescue and viewing the soccer team in such a vulnerable position (they literally have no choice but to trust in these divers to save them), it’s impossible for your heart not to melt while also sitting on the edge of your seat. The strength and perseverance of humanity are on full display in The Rescue, culminating in an incredible documentary on the ways the world can come together to help one another.

Lady of the Manor is a Mediocre Culture Clash Comedy