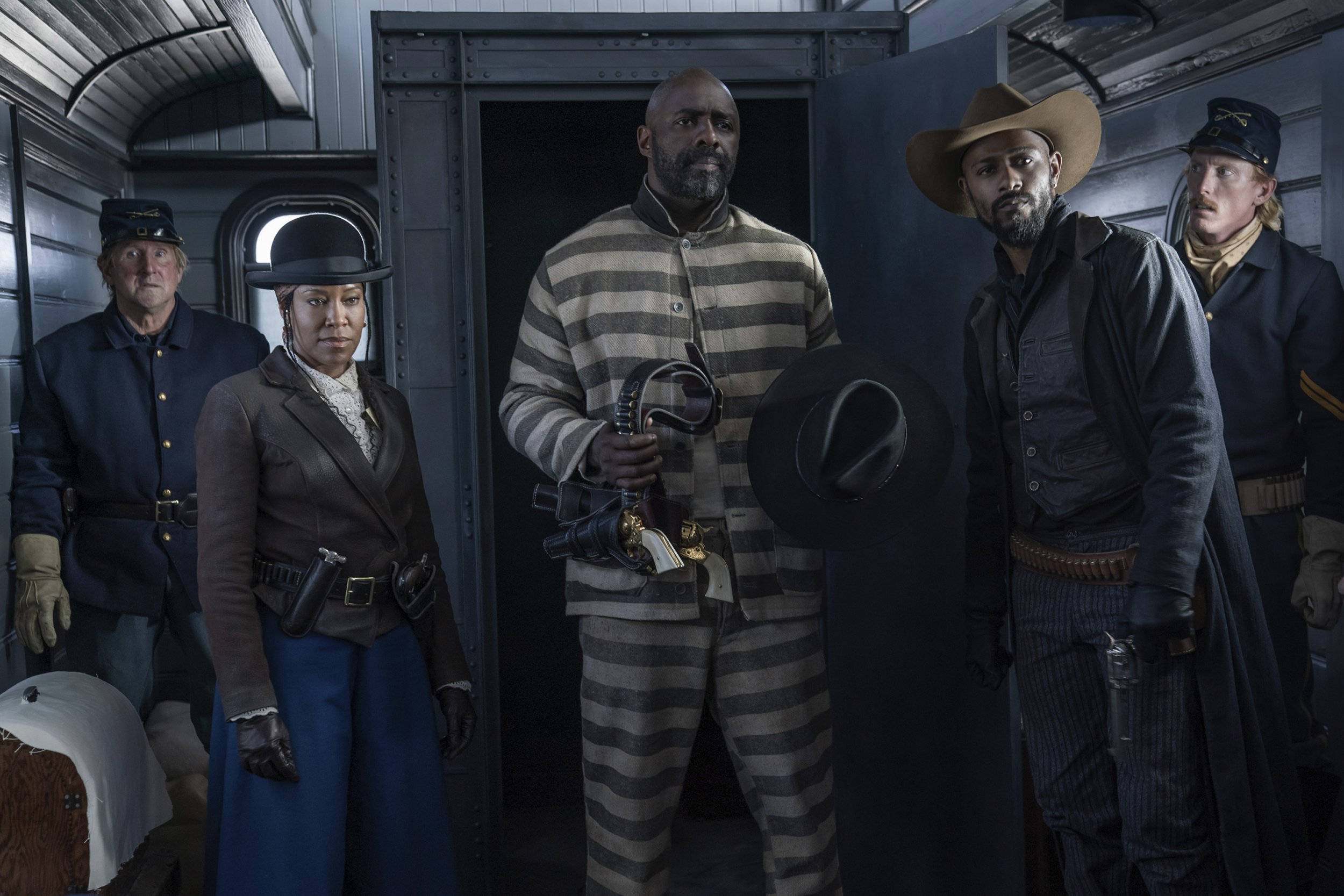 LFF 2021: “These. People. Existed.” reads the opening card for Jeymes Samuel’s The Harder They Fall. The message is loud and clear: he’s not going to let the stories of African-American cowboys and girls left untold, to be buried underneath the outings of John Wayne and James Stewart. Instead, he’s going to tell you a story of the Wild West (albeit fictional), boasting a stellar all-Black cast, beautifully shot vistas, and highly entertaining set-pieces.

Nat Love (Jonathan Majors) is on a mission of revenge. Confident that he has dispatched the last of the crew who tore apart his life years ago, and planning to retire with his on-again/off-again girlfriend Stagecoach Mary (Zazie Beats), he is suddenly informed that the crew’s leader, Rufus Buck (Idris Elba), will be broken out of custody by Trudy Smith (Regina King) and Cherokee Bill (Lakeith Stanfield). Believing his work to be unfinished, Nat’s crew reassembles to finish the job.

After a tense and upsetting prologue, the film sets its tone with visual flair: our lead is introduced to us as the ultimate anti-hero, dispatching his enemy in a church; vivid and explosive blood is shed across the floors; the title of the film is produced in freeze-frames between gunshots. Its stylization of violence and Wild West warfare will be compared to the likes of Quentin Tarantino or Matthew Vaughn, but this is reductive – first-time feature director Samuel is far more restrained and elegant in his execution, knowing when to pull back so as not to tip over into self-indulgence.

A delicate balancing act, to be sure, but one held up across the entire film. Rich hues are strewn across the production design and costumes, jewel-toned towns, and vibrant saloons contributing to the dramatism of a classic Western (bar one town, a visual gag that’s worth the price of admission alone). Gone are the days of drab cowboys draped in grey and brown, they’re all about red coats and top hats now, bringing with it originality lacking in its predecessors.

Not a foot goes wrong in its casting; Majors, after excellent performances in The Last Black Man in San Francisco and Lovecraft Country, outdoes himself here, with an incredibly articulate turn as Love, equal parts grief and charm. You can sense that King, cast somewhat against type as a proper villain, is having the most fun outside of the box, but the surprise of the movie might be Elba. There is no doubt that Elba is a massive talent, but, under a lesser director, he might be encouraged to chew the scenery as the Big Bad – here, he dispatches his opposers with a quiet dignity instead of rage.

If there’s one issue to be taken with the film, it’s in its second act, which is significantly slower-paced than the two bookending it, and may cause impatience in some. It’s the price to pay for a fast-paced introduction – with a magnificent opening credits to boot – and a carnage filled finale, but there’s an argument to be made for a tighter narrative and editing.

Injecting life and energy into a dormant genre is near impossible, but Samuel has just about achieved it.  Slick, sexy, and stylish, The Harder They Fall ain’t your grandmother’s Western – and it’s all the better for it.

Fright Night is an Unnecessary But Fun Remake