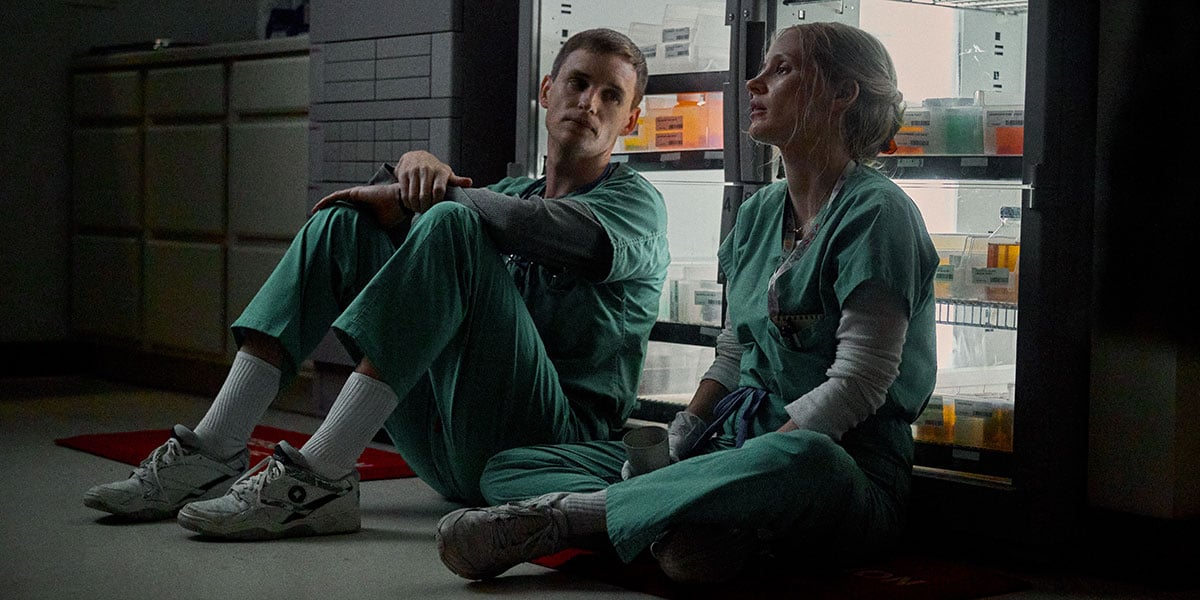 “The American health care system is broken”. That sentiment has been echoed, analyzed, and cinematically explored in one form or another, with varying success. It’s one of those classic, hot-button topics that has surrounded the national discourse for the better part of the 21st century, as rising costs and shrinking incomes limit widespread access to it. All the while greater loopholes are exploited by patients and practitioners alike, in an effort to curtail the system’s innate shortcomings.

With The Good Nurse, Tobias Lindholm hopes to add to this growing discourse with a thriller that centers on one of the most prolific serial killers ever, who used the world of health care to conduct his harrowing crimes. Except labeling it as a thriller would do a disservice to the genre, as it’s not only one of the most aggressively dull explorations of this all-important issue but one of the most tiresome true crime films ever made.

Lindholm’s first American feature follows Amy (Jessica Chastain), a nurse struggling with single parenthood and a weak heart, as she hopes to be employed long enough until she can acquire the insurance to pay for her much-needed transplant. When a new nurse, Edward Cullen (Eddie Redmayne), is hired at her New Jersey hospital, his supportive attitude helps her endure the dreary graveyard shifts and the increasing demands of a career in the medical field.

Once some of her healthy and recovering patients begin to die mysteriously, local homicide detectives (Nnamdi Asomugha and Noah Emmerich) start to align the puzzle pieces but are obstructed by the hospital’s bureaucracy. As Charles’s checkered past at other hospitals comes to light, Amy is forced to help the investigators put a stop to his murderous streak.

With such an enticing plot, it’s an utter shame that it’s made into such a low-energy affair that never provokes or delves deeper into its subject with nuance and introspection. The audience is not only left feeling very little but with no interest in this harrowing occurrence. Worst of all, Lindholm and company believe their story is revelatory, and one that unearths piercing truths about the American health care system. But its critique has the opposite effect, ringing completely hollow and emotionally manipulative.

The Good Nurse distinctly lacks forward momentum, feebly traipsing along its plot beats of rote, menial revelations, and familial strife with no genuine emotional core. While a cold and objective lens is never a bad approach (especially in thrillers), its depiction of dark subject matter still shouldn’t feel this insipid and monotonous.

This monotony is the film’s greatest crime. Once it leaves behind its expository exploration of Amy’s personal struggles as a mother and a nurse, to settle into its investigative stream, the film takes on a distinctive dull aura — replete with bland office discussions, interrogations, and superficial provocations.

Moreover, its expertly framed and composed camerawork, full of cold, exacting wides, is zapped of its craftmanship due to its drab colour palette. This is the “Netflix Filter” in full effect, as any semblance of Lindholm’s style and skill as a filmmaker is nowhere to be found. This in tandem with its derivative, droning score only heightens the film’s snooze-inducing effect.

As if this film couldn’t get any worse, it’s also not able to depend on its performances, which are all distinctly muted at their best, and laughably cringeworthy at their worst. Chastain comes across as stilted, unable to conjure authentic emotions from the film’s barebones exploration of a nurse’s burden within a profit-motivated institution.

Yet, perhaps, the film’s worst creative choice is Redmayne himself, who brings unintended laughs instead of layers to his portrayal of one of the most enigmatic serial killers ever recorded. As Cullen’s charade comes to an end, Redmayne’s unadulterated campiness comes to life. His performance reaches Jupiter Ascending levels of inadvertent hilarity, actively eroding the film’s concerted attempt to be eerie and chilling. With this outing, Redmayne cements himself as one of the worst working actors today.

The Good Nurse is a deeply uninteresting and tedious cinematic experience that is overmedicated with precisely the wrong type of mentality needed for a taut and introspective thriller. Despite its promising setup, it’s a film that goes nowhere very slowly, as it concludes not only with a whimper but with a resounding thud. Unlike its title, there is nothing good to be found here.