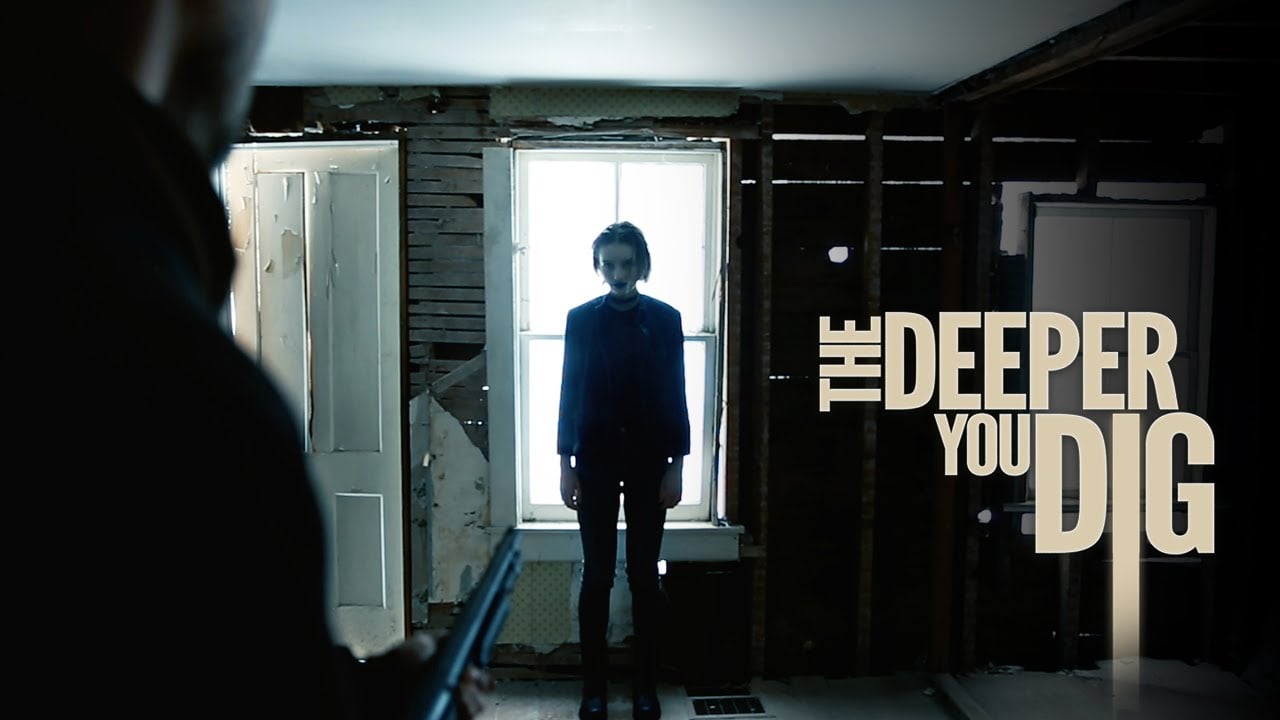 As cameras and editing software get cheaper, the bar for entry to becoming a filmmaker gets lower. And despite what snobby gatekeepers will tell you, that is very much a good thing. Art is made by artists, not the tools they use, and the most expensive gear and extensive crews do not a good movie make. The Deeper You Dig is proof of that, having been made for a scant eleven thousand dollars by a family of three who wrote, shot, edited, and starred in the film. While it’s a bit rough around the edges, there’s a dedication and craftsmanship that suffuses every frame, and in many ways those rough edges only add to its charm.

Single mother Ivy lives in a sleepy town with her daughter, Echo, separating the gullible from their money as a fraudulent psychic. But on one dark night, Echo is hit by a drunk driver — the shifty local, Kurt. Kurt hastily hides the body, but soon finds himself assailed by terrifying visions and plain old guilt. Ivy, meanwhile, continues to search for Echo by rekindling her dormant psychic gifts.

The Deeper You Dig is at its best when it is playing out like that old Sylvester the Cat cartoon where he thinks he finally got Tweety, and has nothing to do now but stew in guilt and sweat. Thanks to the impeccable atmosphere, the mostly silent scenes of Kurt trying to put the accident behind him while he restores an old household instills a wonderfully palpable sense of dread even before the paranormal elements begin to reveal themselves. Of course, those elements do begin to crop up, and the film becomes a more somewhat more conventional ghost movie as it goes on. This isn’t bad per se, but those early scenes definitely leave the strongest impression.

The Deeper You Dig is a great example of how much can be accomplished with very simple tools. It’s quite beautifully shot, for one, with a very careful and confident eye for framing. The editing is also quite stunning at times, occasionally using a carefully chosen crossfade to stunning effect, and marches to a steady but deliberate rhythm the rest of the time. Again, the film is extremely good at using very simple tools to very great effect. Some of the more striking images even come as a direct result of the low-fi aesthetic. Scenes shot in the dead of night feel appropriately pitch black, where a bigger production would have used a lighting rig. Other times, shots are thrown into a high contrast by cameras with a low dynamic range. This is the kind of film that reminds one that low-fi is an aesthetic, not a shortcoming.

It does have some rough spots, though. The soundtrack is an odd choice — a droning, amelodic affair that walks the line between music and noise. It often doesn’t quite gel, and some sequences would perhaps have worked better silently. There are also some brief dalliances into surrealism that are certainly ambitious but can come across as stilted and awkward rather than engaging. The filmmakers will also sometimes try and pull off a visual that perhaps should have been implied rather than directly shown, like a decapitation scene that doesn’t really work despite their best efforts. It’s nothing if not ambitious, and that should be applauded on its own; even if the execution can feel a bit off, the enthusiasm and persistence of vision make up for it to a degree.

A good film demands passion from the people making it, and there’s no shortage of passion in The Deeper You Dig. That abundance of passion goes a long way, and the clear mastery of the tools at their disposal doesn’t hurt either. The Deeper You Dig is the kind of movie that Fantasia Fest was made for: those far off the beaten track, but well worth seeking out if one finds the chance to see it.

Fantasia 2019: ‘Master Z: Ip Man Legacy’ is All About the Fanciful Fighting

Fantasia 2019: ‘Sadako’ is a Bland Installment in the Ring Series