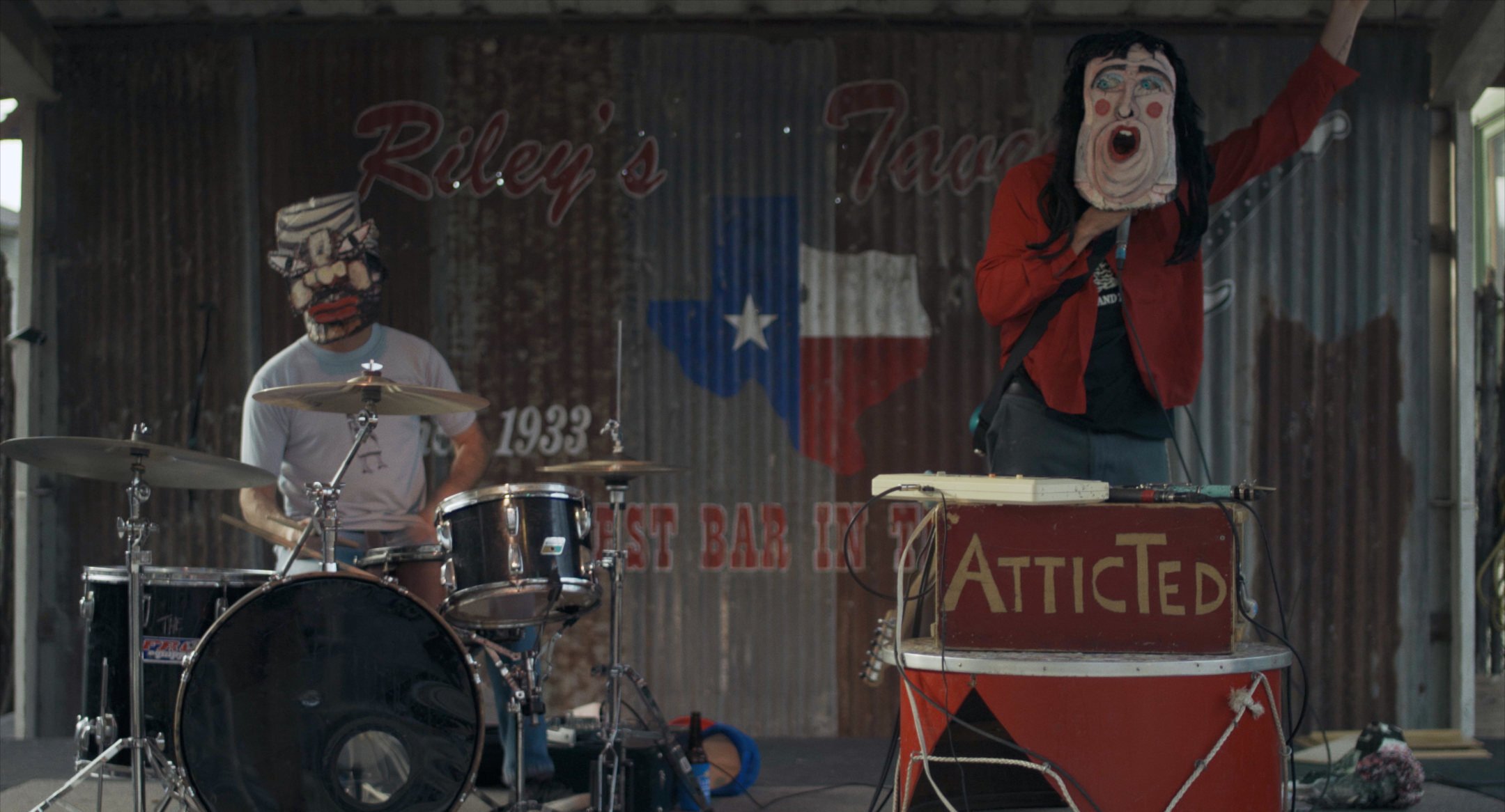 There is almost nothing conventional about Texas Trip – A Carnival of Ghosts and its subject. Using drive-in theater culture as a jumping-off point to navigating the fringes of artistic expression in Texas, co-directors Steve Balestreri and Maxime Lachaud survey the underground music scene and some of the ways in which identity is being explored. Aided by two main subjects with distinct presences in the film, Texas Trip is a fascinating look at an otherwise ignored segment of the music scene.

While watching Texas Trip, I was reminded of 2013’s A Spell to Ward Off The Darkness – a movie that focused on a musician during three different moments of his life, culminating in a black metal performance. Both capture moments in a very loose manner and in Texas Trip’s case, it is juxtaposed against its idea of cultural identity within the confines of capitalism. In this film, the drive-in theater’s showcase of ghouls and ghosts is transferred from one medium to another: music and live performances. Depending on why you love horror movies or more aptly, why you might prefer watching movies with a group, will dictate how much you’re able to get out of Texas Trip.

Using Texas as the setting, Balestreri and Lachaud are able to use the extinction of drive-in theaters as a means of finding where those audiences went when the open exhibition of the macabre disappeared. In comes artists like Mother Fakir, Ernestina Forbis, Ak’Chamel The Giver of Illness, and Attic Ted who have turned the performative element of live concerts into a way of exploring themselves and their music. Each one expands upon the role of identity in music and gives the feeling of a bigger scene than it may initially appear. The presence of them and other artists shows that the niche which the directors have found is not a few one-off artists – it’s a constantly growing scene as people find their place within it.

Framing most of Texas Trip, Mother Fakir pushes the limits of his body on stage in a way that many may find disturbing and akin to the stuff you’d see at a freak show. However, the documentary explores why that self-harm and intentional destruction of the body is more of a cathartic, therapeutic process than one of self-destruction. Mother Fakir uses noise and ambiance to create an atmosphere on stage that exposes the fortitude and resilience of the human body. Having seen similar, though not as gruesome, noise metal performances in the past, I found myself enraptured by the sentiment of the performance. Fans of Shin’ya Tsukamoto’s work with movies like Tetsuo: The Iron Man will probably be able to wrap their head around the conceit without too much of an issue.

That’s without even really talking to people who watch the concerts. Texas Trip is more preoccupied with the artists who find themselves on the fringes of the music scene and what pulls them there. The interviews with the artists are what help people like me who already find these performances fascinating, understand a bit more of what is going on in their heads. However, an artist like Mother Fakir may be looked at as impenetrable if you’re already looking at the scene as weird. Interviews with people who attend these shows or even promoters and distributors would go a long way to illuminating the unaware.

Texas Trip offers a sincere look behind-the-curtains of a subsection of culture often glanced over or ignored entirely.

Artists like Attic Ted feel the most to watching and listening to a carnival. Wearing masks for their performances and incorporating strange noises, organs, clarinets, and distortion, they’re bizarre in almost every respect. Primarily interviewing Grady Roper of the band, Texas Trip finds itself straddling the other appeal of horror films – the idea of experiencing something truly unique and surreal. Combined with Mother Fakir’s more disturbing, haunting performances, the film draws the direct parallels between the niches that both the horror community and the music scene satisfy.

Texas Trip will not be for everyone, and it’ll probably be clear within the first ten or so minutes if that’s the case. Horror fans might enjoy the film’s attention to drive-ins and the movie even includes Joe Bob Briggs’ “The Drive-In Oath” against clips of classic horror and the desolate, empty drive-in lots. The problem is that the film isn’t very direct in the parallels it’s drawing without using juxtaposition. It is far more abstract than it probably should be, with only a meaningful examination of the creative side of the equation.

That said, it’s an eye-opening documentary for those unaware of the varied options in the music scene. Dreamlike and wandering in its composition, those who find something to love in the film will have already likely frequented the fringes of culture or have a growing interest. Despite its lack of detail, Texas Trip offers a sincere look behind-the-curtains of a subsection of culture often glanced over or ignored entirely.

Fantasia 2020: Me and Me Lacks Clarity in a Dreamlike Narrative