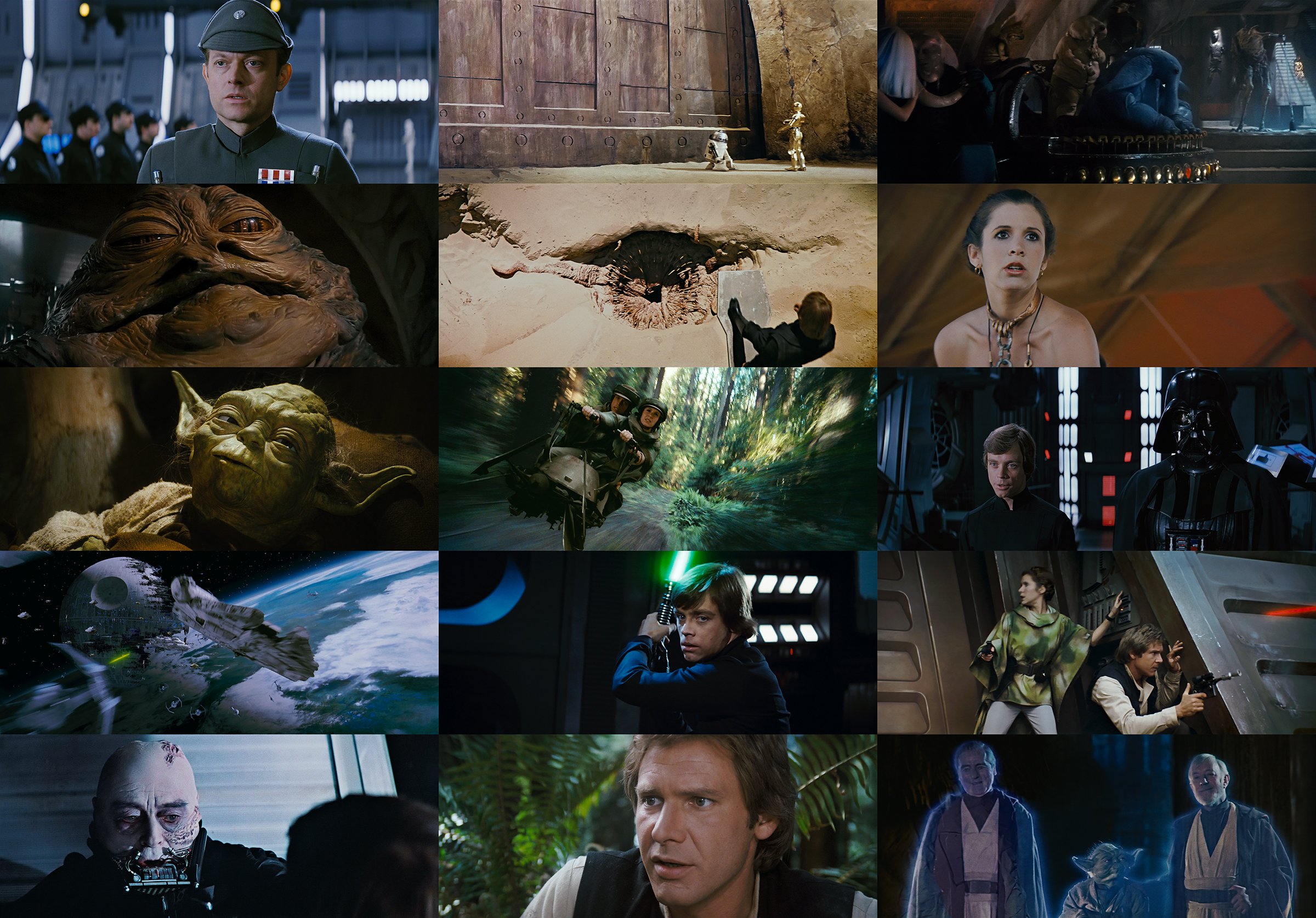 35 Years Later: Return of the Jedi

This year marks thirty-five years since Star Wars Episode VI: Return of the Jedi closed the book on the original Star Wars trilogy. Over the years, subsequent films have diminished Jedi’s role as the final word in the Star Wars saga, but for sixteen years it stood as the definitive end to the most popular film series of all time. In many fans’ hearts, it still does.

Return of the Jedi may not be the best of the first three films, but it is the most fun. The creatures are more fantastical, the space battles more epic in scope, and the Emperor’s scenery-chewing is just delightful. Ian McDiarmid’s portrayal of Palpatine is wonderfully over-the-top, and one of the best performances in the whole saga.

Jedi is really two films: the first part is a rescue mission to free Han Solo from the clutches of the vile gangster Jabba the Hutt (basically so George Lucas can redo the cantina sequence from A New Hope with better masks), and the second is a last-ditch effort by the Rebel Alliance to destroy the Empire once and for all. Jabba’s Palace is like the Mos Eisley cantina on steroids, a dark wonderland of creatures and oddities brought to life by puppeteer and stop-motion wizard Phil Tippett. Each alien is more exotic and dangerous than the last, but the crown jewel in Return of the Jedi’s menagerie of grotesqueries is Jabba himself. It took three puppeteers to bring Jabba the Hutt to life, and the results are amazing. There’s a certain “realness” you get when actors are in the same room with a physical prop that you just can’t get reacting to a green screen, and with Jabba, it’s like Carrie Fisher and Mark Hamill are sharing a scene with another actor (one that just happens to be a giant slug) rather than a special effect.

The Jabba sequence also serves as an introduction to an older, wiser, and more capable Luke Skywalker. From the moment he enters Jabba’s palace and takes out two Gamorrean guards with just a wave of his hand, it’s clear that this is not the same wet-behind-the-ears wannabe Jedi that got his butt kicked at the end of Empire. In truth, all three of the main characters have matured since their last outing. Leia is more proactive and less of a damsel in distress; Han is no longer a self-centered loner, but instead, a man who cares so much about his friends he’s willing to give up his most cherished possession — the Millenium Falcon — in order to accompany them on a possible suicide mission. At the end of the day though, the original trilogy is Luke Skywalker’s story, and Return of the Jedi is its climax.

Return of the Jedi is Mark Hamill’s finest performance as Luke Skywalker (and yes, that includes his turn as “Jake” Skywalker in Rian Johnson’s weird fanfiction experiment, The Last Jedi). Hamill portrays Luke as a man trying to fulfill his destiny without a clear blueprint for how to do so. With all of his mentors either dead or dying, it’s up to Luke to figure out how to be a proper Jedi Knight, and he doesn’t always do the right thing. Despite his best attempts to control his emotions, Luke gives in to his anger frequently. He tries to resolve things with Jabba diplomatically, but when that doesn’t work, he doesn’t hesitate to switch to Plan B: kill everyone. Seriously. When Anakin Skywalker murders a whole encampment of Tusken Raiders in Attack of the Clones, the camera cuts away right before the slaughter begins; in Jedi we see the entire Sarlacc Pit massacre from start to finish.

Luke loses his shit again in the emperor’s throne room, cutting off Darth Vader’s hand and coming within an inch of killing his father altogether. He ultimately chooses not to commit patricide — despite Obi-Wan, Yoda, and even the Emperor all urging him to kill Vader — an act of rebellion that leads to Vader’s own redemption. Luke goes through so many emotions during his final battle with Vader, including confidence, doubt, rage, remorse, and finally resignation, and Mark Hamill portrays them all flawlessly.

Despite acting as the perfect climax to the greatest story ever told (no offense to the New Testament), Return of the Jedi often gets a bad wrap. Some people see Jedi as a dry run for the prequels, while others look at it as the start of Star Wars as a toy commercial. Both arguments have some merit but are ultimately unfair. There may be more special effects on display in Return of the Jedi, but it’s still a far cry from the kitchen sink approach George used in the prequels.

As for the toys, Kenner was milking the franchise for all it was worth well before Jedi came along. They even made a Cloud Car Pilot action figure, and the fact that you now have to Google “Cloud Car Pilot” to have any idea what I’m talking about just proves my point.

However, no discussion about Return of the Jedi’s perceived faults would be complete without the Ewoks, so let’s get it over with. On the surface, the idea of attacking stormtroopers with sticks and stones seems laughable. However, if you view the Ewoks as stand-ins for the Viet Cong, like George Lucas intended, it makes more sense. Think of them less as teddy bears, and more as cunning warriors using guerilla tactics to take out a technologically superior foe. In fact, if you squint, the whole Battle of Endor can be seen as an allegory for the Vietnam War. Before anyone asks, yes, in that analogy the Empire would be America. Make of that what you will.

Still not convinced that the Ewoks are secretly badasses? How about the fact that the fuzzy little psychopaths wanted to eat Luke and his friends for dinner? They even got as far as tying Han Solo to a spit — the only thing missing was an apple in his mouth. The furry scamps also have a penchant for turning the severed heads of their foes into drums, and then wailing on them like some Scandinavian Black Metal band. Look up the word “Hardcore” in the dictionary, and you’ll find a picture of an Ewok doing his best John Bonham impression on a kit made from Stormtrooper skulls.

Still, it’s hard to make a case for Return of the Jedi when both George Lucas and Disney have done everything in their power to tarnish the film’s legacy. When Lucas altered the original trilogy for his “Special Editions,” Return of the Jedi got hit the hardest. Subsequent “improvements” introduced through various home video releases only made things worse. Lucas reworked Jedi’s ending to show various planets across the Star Wars universe openly celebrating the death of the Emperor, as if there weren’t still millions of stormtroopers stationed on every planet in the empire, and then there’s Jedi Rocks, the blinking Ewoks, and Hayden Christensen as a force ghost…but the less said about all of that the better.

Not to be outdone, Disney released a sequel trilogy that undermines any closure Return of the Jedi brought to the saga. The Force Awakens was great, but that doesn’t change the fact that its very existence ruins Jedi’s ending. Any victory won against the Empire is now temporary, as is Han and Leia’s union — and don’t get me started on what happens to Luke. Disney took one of the greatest happy endings of all time and crapped all over it.

In the end, however, all the CGI yuzzums and green breast milk in the world can’t change what Return of the Jedi is: the greatest third act in any trilogy ever. Period. Individually, the Star Wars movies may not be contenders for “Best Movie Ever” (though Empire probably makes the top 10), but as a trio of films, no one can touch them. Not pirates, not superheroes, not even Hobbits.

To borrow a quote from Clerks 2:

They don’t call it the holy trilogy for nothing.