Connect with us
Mike Leigh's historical drama, "Peterloo," is a Janus-faced work of art — half didactic mess, half furious masterpiece.

There’s a fantastic, moving, and exciting story at the heart of Mike Leigh’s newest, Peterloo. The title refers to the invented name of a massacre at St. Peter’s Fields in 1819, when a mass of protesters seeking the right to vote for members of the House of Commons were slaughtered by out-of-control soldiers. The second half of Peterloo, which directly deals with the massacre and its buildup, is among the most furious sections of film Leigh has ever created. The first hour, however, moves as quickly as a snail stuck in pitch.

Leigh effectively conveys the conditions for the working classes in 1819. The UK had defeated Napoleon and decisively ended its years of conflict with the French at Waterloo in 1815, but rather than new prosperity, the postwar years were marked by further consolidation of wealth and power by elites. The Duke of Wellington receives a massive gift from parliament for his victory, but the foot soldiers who actually won the battle for him return to poverty and despair. Matters are made worse when taxes are levied on bread and other necessities to pay for the war, while wealthy lords and landowners are spared any additional pain.

Leigh frames this introductory section by focusing on one family and its struggles to make ends meet, but he also flits around so quickly between them and scenes of poor people being abused in court that it’s impossible to learn much about their sorrows or to feel their pain. In the courtroom scenes, Leigh presents grotesque tableaus in which bewigged judges sentence poor people to death for minor thefts. 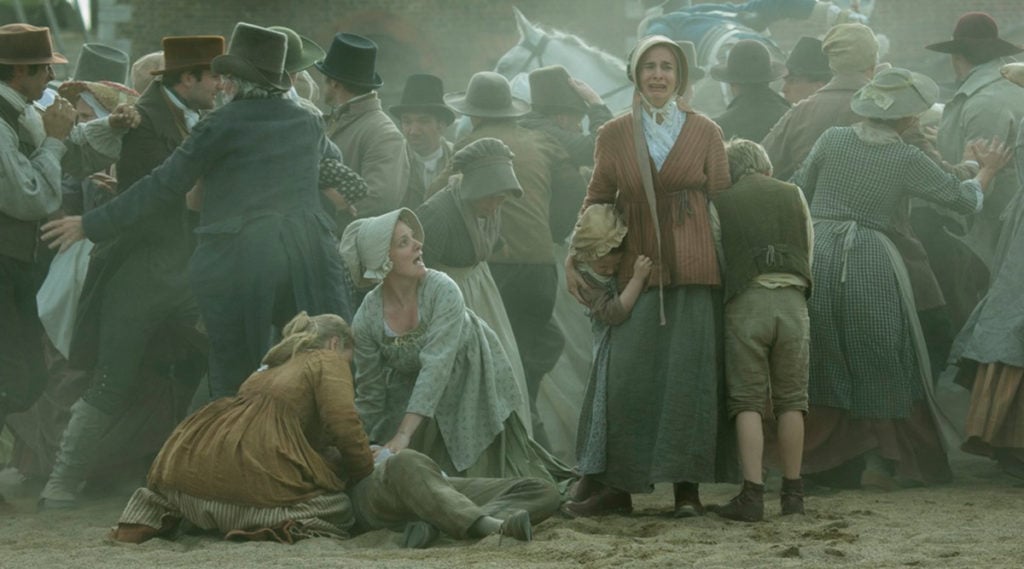 Leigh favors a mostly static camera, which tends to rob the scenes of energy, yet he counteracts this by allowing over-the-top histrionics from his actors, in particular a jowly magistrate who seethes with bilious contempt for the working class. This first section comes off as didactic and stagey — most viewers would naturally be sympathetic of a desire to vote, rendering the cartoonish villains unnecessary.

Peterloo’s second half is far more successful. The film is unmistakably an ensemble piece, but the great Rory Kinnear rises to the fore as a wealthy reformer determined to secure the vote for commoners. When it comes to the actual massacre, Leigh effectively stages it so that we see the breakdown in order as the bored soldiers give in to their bloodlust and contempt. After the sluggish early parts, the violence visited on peaceful protesters is startling and difficult to watch.

Leigh has shown himself to be an effective director of period pieces, but by not trusting the viewer’s ability to discern the moral center of his story, he sacrifices its impact. The latter parts of Peterloo are strong enough to still recommend it, but it remains a tragically flawed work of art.

Notes on TIFF 2018: Flying to Toronto With Robert Bresson