The intriguing premise proposed at the beginning of Passengers is the kind that inspires the sort of entertainingly open-ended morality debates that any well-served bar room is filled with, but unfortunately the “what would you do?” question that should be at the core of this sci-fi blockbuster is far more interesting than the actual by-the-numbers cliches eventually showcased on the screen. Sure, getting somewhere may be half the fun, but then so is actually arriving, and after initially suggesting an exploratory trip with the potential for any number of fascinating destinations, the story gets stuck at the first fork in the road, unsure which way to go, ultimately wandering back through all-too familiar territory.

The journey starts out quite promisingly when Jim, a mechanic booked on a 120-year interstellar flight to a colony world in need of skilled tradesmen, accidentally awakens from his hibernation pod too early. Finding himself alone on the massive ship, and unable to go back into dormant sleep with the other five thousand passengers and crew, Jim is faced with spending the rest of his life in solitude, a prisoner in a floating cell, with no hope of freedom in the infinite blackness. This bleak outlook is the perfect setup for an intelligent psychological study of what it means to be human, a subject that the film’s genre has always excelled at. While nearly every one of futuristic gadgets and doodads on board is designed to tend to the comfort and desires of humans, their cold, technological nature prevents them from offering their only flesh-and-blood customer what he truly needs: someone else.

Though Chris Pratt lacks any real gravity during these early scenes, coming off less like a tragic Twilight Zone victim and a bit more like a cast member of Last Man on Earth, the film still goes through some interesting philosophical motions, especially when Arthur, the ship’s android bartender, is introduced. Though technically lifeless, as an automaton programmed to wipe a glass while listening to his clientele’s woes, Arthur presents a possible solution to Jim’s loneliness. His flexible perspectives reflect the complexity of applying logic to solve emotional turmoil, and despite a soothing voice that oozes wisdom, his advice contains no easy answers. Played with a charming robotic stiffness by Michael Sheen, with a stare that somehow manages to be blank and knowing at the same time, the conversations between man and machine make for the most engaging moments in the film, providing glimpses of what a true examination of the nature of companionship could have led to. 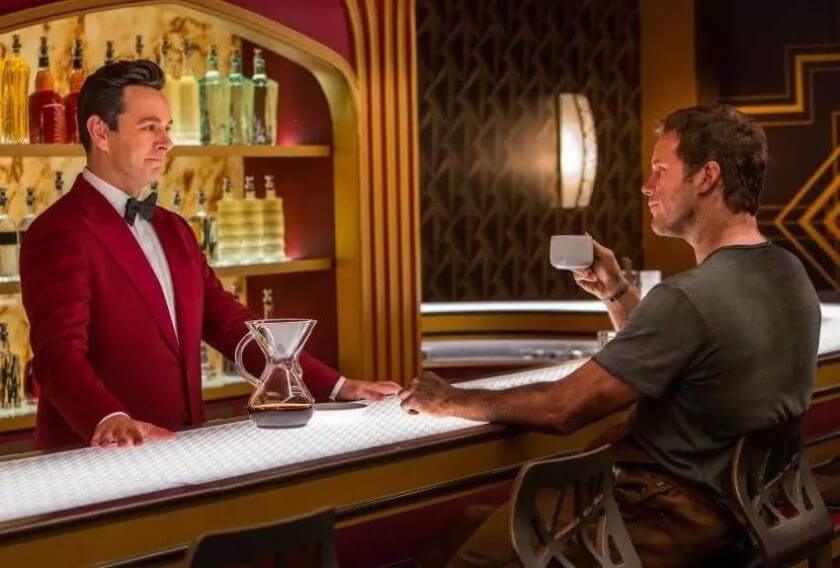 Unfortunately, this is not to be. Passengers‘ promise of a toy store outing really just masks a trip to the dentist. The story quickly veers off course with the awakening of another passenger, Aurora. Naturally, this incident is a dream come true for a man condemned to isolation, and as one of the only two souls around for light years, Jim knows he’s got a pretty decent shot at romancing the young woman. With that, a fascinating science fiction dilemma steeped in humanity is reduced to light rom-com banter and forced chemistry more mechanical than the guy serving drinks. That the two characters will fall in love seems preordained by a script unfamiliar with human courtship, and as a result never feels grounded in anything real, never feels earned. Yes, various shallow twists and turns in their relationship happen along the way, because they must, but these plot points contain all the surprise of plucking petals from a flower, hitting nothing more than the predictable beats found in any popcorn love story. It doesn’t help that Aurora (Jennifer Lawrence, herself seemingly on auto-pilot), comes across as the kind of woman that could only exist in a socially-deprived man’s imagination: perfect in body, but bland in personality. 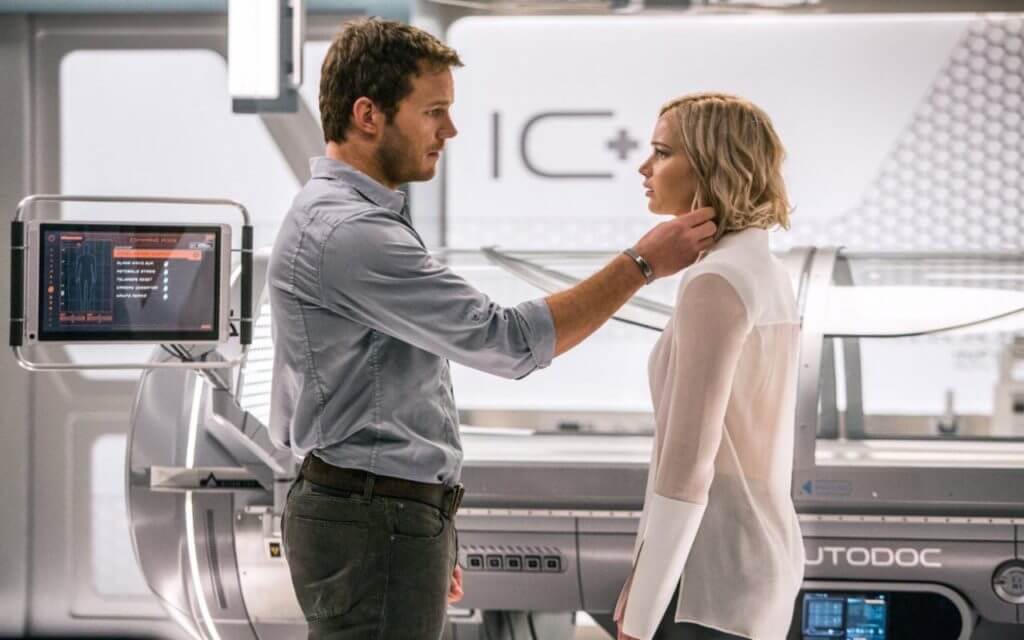 Perhaps she and Jim are metaphors for Passengers itself; often impeccably dressed and pretty to look at, but devoid of any soul. Director Morten Tyldum’s camera lingers on sleek objects both human and otherwise in an effort to amp up the sex appeal of space travel, but the effect of this superficial ogling has no more impact than that of a futuristic shopping catalog. Once the shininess of the gloss wears off, there’s just not much keeping the couple together, other than circumstance. Would that be enough? Again, this situation offers more opportunity for something actually unexpected to happen, a scenario without foregone conclusions, but Passengers holds itself back, unwilling to take either a small step or a giant leap, boldly going where many others have gone before.

Eventually the ambling story realizes that it needs to wrap up, and so the intergalactic road trip devolves into a mediocre roller coaster, full of just as many eye rolls as arms raised, running in circles. Instead of soaring through uncharted territory in search of new worlds ripe for discovery, Passengers loses its nerve not long after takeoff, ultimately deciding to abort the mission and head back to the safety of blockbuster formula. Nothing lost, but nothing gained. Successful science fiction has the power to transport its audiences to exciting places unknown, but those hitching a ride with Passengers will find themselves on the path to nowhere.

Disney and Star Wars: The Beginning of a Beautiful Friendship

‘Gummo’ – A Stylish, Poetic, and Brutally Honest Portrait of an American Underclass