The public trial and eventual hanging of the fugitive Nazi officer Adolf Eichmann in 1962 was the culmination of a thrilling mission. Covert operatives from Israel’s intelligence agency, Mossad, extracted Eichmann from Buenos Aires under cover of night. Their every step was hounded by Nazi sympathizers and government bureaucrats angling for political favors. After hiding and interrogating Eichmann for nine grueling days in an Argentinian safe house, the agents finally scrambled to safety aboard a jetliner bound for Israel.

It’s a premise that’s just begging to become a historical thriller; there is danger, intrigue, and the emotional and physical devastation of a Holocaust only fifteen years in the past. So why, then, does Operation Finale feel so flat?

To be clear, Operation Finale is not a bad dramatization of this fascinating real-world event. It’s ably helmed by director Chris Weitz (The Golden Compass, About a Boy), features powerful performances from Ben Kingsley and Oscar Isaac, benefits tremendously from being shot on location in Buenos Aires, and tells an inspiring story about the importance of justice, no matter how belated.

Still, Operation Finale fails to deliver the emotional crescendo it promises. Most of the blame resides in Matthew Orton’s script, which lacks the engrossing characters and visceral thrills it needs to transcend a good documentary on the same subject matter. 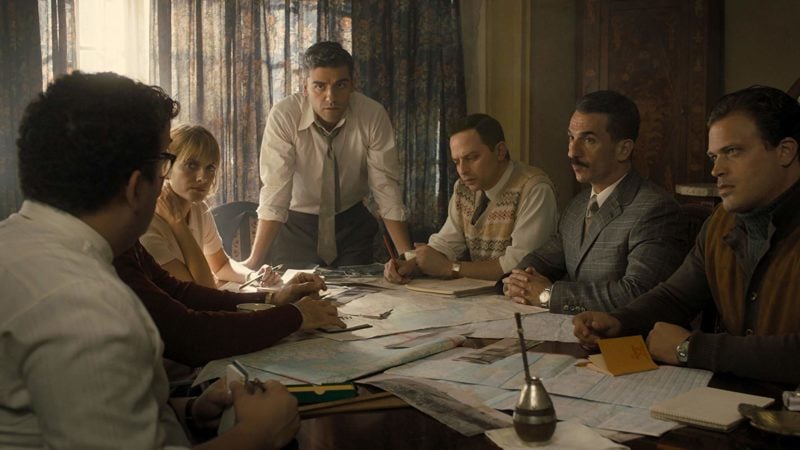 For starters, our hero, Peter Malkin (Isaac), is an emotional flat line. Still haunted by the ghosts of his sister and her young children (murdered along with six million other Jews by Eichmann’s Nazi henchmen), Malkin isn’t exactly the model soldier. He sleepwalks through training exercises and skips the research required to be a reliable intelligence operative. Nowhere is this more apparent than the film’s opening scene, in which Malkin’s crew mistakenly executes the wrong Nazi fugitive.

“He lets everyone down,” a co-worker glibly observes in an apt description of both Malkin’s professional and personal life. About the only ally he has left is the team’s doctor, Hanna (Mélanie Laurent), who still carries a little torch from their previous debacle of a love affair.

It’s a fertile backstory that goes largely untended. Instead, the filmmakers opt for clichés to express Malkin’s inner turmoil. He meticulously paints and sketches the forest in which his sister was murdered. Sometimes she even drifts into his reality, or he finds himself staggering beneath the darkness of a towering forest canopy. He’s emotionally stuck. The only thing that will free him (he believes) is bringing Eichmann to justice.

Isaac makes something of the part with his natural charisma and roguish charm, but Malkin’s lack of characterization makes his interrogation of Eichmann (Kingsley) decidedly unconvincing. Eichmann, dubbed ‘the architect of the Final Solution,’ is a steely, calculating monster who mesmerizes with each poisonous syllable. His frail physique and plaintive mantra that he was “only following orders” are merely to distract from the evil cogs spinning in his brain.

Kingsley is splendid in the role, exerting not only a considerable psychological force, but an overwhelming physical presence, despite being immobilized for most of the film. It’s an uncanny performance that recalls his role in Polanski’s 1994 thriller, Death and the Maiden, in which a bound Kingsley must command the screen with his only his face and voice.

Operation Finale introduces the conceit that Malkin’s team may only exit Argentina if they coerce a defiant Eichmann into signing an extradition consent form. What intends to be a cat-and-mouse game between two equally determined adversaries (Malkin v. Eichmann) feels more like a bored tiger toying with his crippled prey. It’s a similar scenario to Clarice Starling’s FBI cadet confronting the notorious Hannibal Lecter in The Silence of the Lambs; Malkin must expose fragile parts of his psyche in order to gain Eichmann’s trust.

The difference is that Starling’s personal revelations to Lecter are not only revelations to the audience, but to herself. She is discovering the extent of her inner anguish, and finding the strength to overcome it. Malkin has no personal revelations to share; the film has already spelled out the anguish over his sister, and sharing them again with Eichmann carries no emotional currency. He learns nothing about himself, which makes his tête-à-tête with Eichmann a decidedly flat, one-sided affair. The only sparks of tension come courtesy of Kingsley and Isaac’s ferocious performances.

Absent too are the propulsive thrills we get from similarly-themed historical dramatizations. Ben Affleck’s 2012 Iranian extraction yarn, Argo, and Spielberg’s masterful revenge epic, Munich, each crackle with an edginess sorely lacking in Operation Finale. Perhaps Weitz and Orton were leery of taking too many liberties with the historical facts? It’s a reverence that likely plagued each agonizing narrative decision, curtailing the excitement of a human-smuggling caper or the moral queasiness of abandoning justice in favor of coldblooded revenge.

Ultimately, Operation Finale is a well-intentioned, competently made film that plays things a bit too safe. Yes, it’s better than 1996’s made-for-TV film on the same subject, The Man Who Captured Eichmann, but it still lacks the emotional punch needed to make a known outcome feel uncertain.

‘Teen Titans Go! To the Movie’ – A Summer Mash-Up of Juvenile Humor and Self-Referential Wit

‘Happytime Murders’ Is Too Incompetent to Be Raunchy