Guy Maddin’s My Winnipeg is exactly the style of film I wouldn’t reach for if not for the ease of the Filmstruck streaming service. Easier to admire to adore, more challenging in terms of presentation than ideas, Maddin’s film (which he called a “docu-fantasia”) is an eccentric and outlandish portrait of Winnipeg — the director’s hometown. Yet, once the viewer is able to parse the film’s thematic perspective, it becomes obvious that Maddin has actually used opacity and outlandishness to obscure a universal sensation: the primal need of a person to move on from their hometown (and upbringing), and the mishmash of nostalgia and complacency which prevents them from doing so.

My Winnipeg is comprised of a number of mythic vignettes presented as historical account (although veracity is not really the point here); there is an experiment in which actors recreate Maddin’s childhood, as well as a series of recurring images of Maddin (portrayed by Darcy Fehr) on a sleepy train out of the city. All the images rush together, punctuated by title cards that echo the real Maddin’s jarring, stream-of-consciousness narration. Describing the rivers that meet in Winnipeg, Maddin merely repeats the words “fork” and “lap,” as a map of the city is transposed over the V-shape of a woman’s thighs. The word “Winnipeg” is repeated so many times in his voiceover that it begins to sound funny and lose meaning — which is likely intentional.

The vignettes vary in subject matter and accuracy, and help Maddin explain the sleepiness and dreariness he finds in present-day Winnipeg. One shows the city’s historic hockey rink being demolished after the Jets moved to Arizona, while another describes the ubiquitous department store that was leveled in favor of a generic new development that no one wanted. Change, of course, is an unavoidable fact of urban development. Less universal are the featured stories which skew apocryphal, such as a séance that devolves into an eerie ballet, or a fire at a racetrack which forced horses to flee into a frozen river — where they remained all winter, as Winnipeg residents picnicked around their lifeless heads. 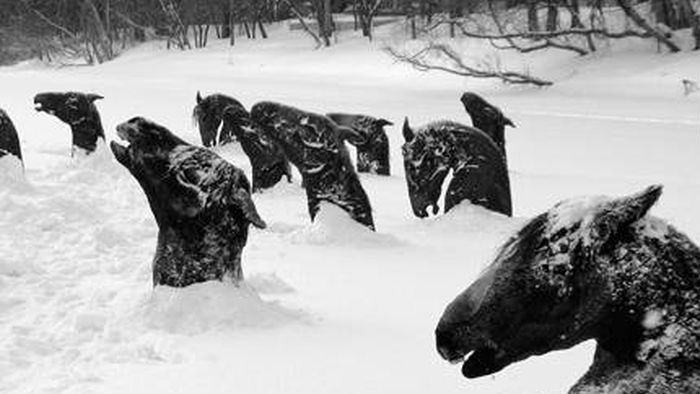 Maddin’s upbringing figures heavily in the film, which comes as no surprise. Played by Ann Savage, the director’s mother is framed as a domineering figure, albeit one that provided his family with a solid foundation. The director turns poetic describing his childhood home above a beauty parlor (a “gynocracy”) run by his mother and aunt. These parts of the film are most evocative of the cocktail of pride and shame that flows throughout the rest of My Winnipeg. Maddin describes a city full of sleepwalking people, overcome by high snow drifts and bland urban development, yet the director picks at something unique about his city as well. He tells us of a rumor which states there are hidden rivers beneath the forks, a source of power that imbues his city with mystery and — in one anecdote about an underground bathhouse which may be tapped into the hidden rivers — sensuality.

Roger Ebert bestowed My Winnipeg with a breathless, glowing review, and listed it among his best films of the year when it came out. I can see why. Maddin’s is a vision sui generis, but it taps into a suspicion we all might harbor: that our origins are both tragically unremarkable and inherently mythic. Even the smallest towns have their landmarks, destined to be replaced by high rises and retail developments. Maddin, with pinpoint precision, targets the clashing emotions on either side of a razor’s edge, between needing to escape and desperately wanting to protect what’s yours.