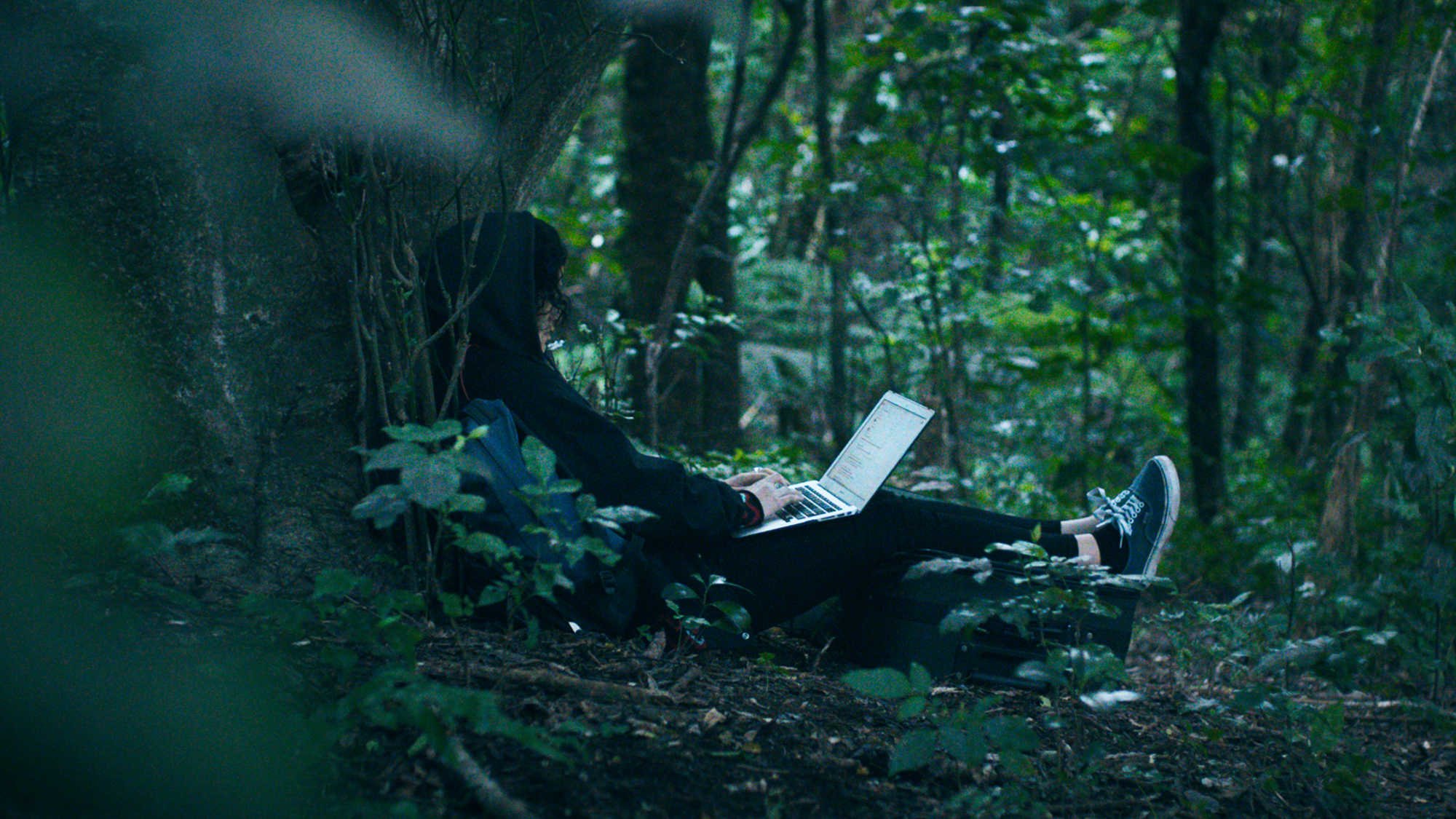 “I just got dumped by my future.”

The setup to Millie Lies Low, a New Zealand comedy film directed by Michelle Savill, is simple enough. Young aspiring architect with a bright future ahead of her, Millie (played by Ana Scotney) is set to board a flight to New York for a scholarship at a fancy architectural school. Moments after boarding the plane, however, the anxiety she’s tried to bury flares up, and a panic attack leads to her missing the flight. With no money, and a thoroughly bruised ego, she has to find a way to rectify her situation.

The solution is simple, of course. It’s shown her friend group is very supportive, as well as her mother, and considering the importance of her scholarship (getting on the front of magazines and posters throughout the city), surely there’s some way to gather support and get her safely to New York. But things aren’t so simple. It’s not easy to admit your failings, and when all this pressure and expectation is put on you it only becomes harder. Couple this with Millie’s insistence on pushing away the thought of even having had a panic attack, and it leads down a rabbit hole of deceit, trying to fake it until she can get back on track. Millie Lies Low follows a slow self-destruction, and in seeing herself fall apart Millie finally starts to see who she really is, and more aptly who she isn’t.

Things just can’t go right for her. Every time she finds herself somewhere comfortable to stop and rest, something else is lumped on top of her situation. When she finds someone willing to buy one of her fabricated stories of why she’s still there, his wife arrives home and thinks he was cheating on her. When she takes a rest out in nature, it begins to rain. Fate is conspiring against her, though of course she does herself no favours by only digging her hole deeper and deeper. She becomes more focused on faking it, rather than fixing her problem and focusing on a way to get to New York. She’s creative, that’s for sure, but her unhappiness and frustration ultimately deepens the further she takes the lies.

The film begins with a great juxtaposition, Millie’s panic attack then her going over a video detailing her “epic opportunity to move on, advance, and grow.” It’s both a bit of a sad-funny moment, and foreshadowing for the arc she takes throughout Millie Lies Low. Alongside trying to work out her unique predicament, Millie is also presented with discovering her real self. As someone who seemed to have hitched herself to her friend Caitlyn, following her dreams and aspirations, she has to navigate the bitter realization that she doesn’t really know what she wants out of life.

The performances really bring this awkward tale to life, and the expertly navigated mix of humour and drama is amplified by a cast of characters that really have life in them. Kiwis have an incredibly dry sense of humour, and the performance of Ana Scotney perfectly encapsulates that style. We get heartfelt moments, secondhand embarrassment, very relatable awkwardness, all topped off by that juicy dry humour that compliments so well. Scotney’s performance cannot be understated, from the perfect delivery of some hilarious lines to the little details about how she portrays that panic creeping up in tense moments.

The cinematography is generally on point, finding places here and there to emphasize this dizzying feeling that comes with panic attacks and breakdowns, but generally finding space for the actors (in particular Scotney) to breathe life into their characters and the spaces they’re in. Highlighting this is a great use of sound, both in a solid fun soundtrack and taking away background music for impact. Despite moments of absurdity and sardonic humour dripped liberally throughout, the stakes feel high. Panic attacks come with sound amplifying, focus shifting all over the place, and Ana Scotney doing a fantastic job with the little details like her lack of breath and movements slowing. It genuinely starts to constrict the heart a bit, and things shift comfortably between humorous antics and cloying anxiety.

Millie Lies Low has this genuine feel to it, with vibrant characters and a whole mess that unravels with every attempt Millie makes. There are these elements of social media, and expectations, and messy women, all coalescing into something that’s familiar but fresh. This isn’t about her getting attention, she’s not trying to fake it to put eyes on herself, she’s grasping at whatever she can to stop plummeting down this canyon of mistakes and screw-ups. Her naivety, her unhinged plans, and of course her being a bundle of insecurities are put on display with equal parts hilarity and empathy.

There comes a point where things change course; the dry humour is still there but with the way things just keep falling further and further apart it takes on an entirely new tone. Millie is a powerful protagonist though – one that’s very flawed and in a downward spiral for the majority of the film – but you can see her resolve, ingenuity, and a growing sense of self are very inspiring.

A powerhouse of emotional weight, an epic journey about going nowhere and finding yourself. Millie Lies Low hits hard when it wants to, and keeps itself entertaining throughout. Michelle Savill perfectly navigates the gambit of emotions and keeps things exactly where she wants them to be. We get so attached to Millie, with all her imperfections, and it’s not often a character is portrayed with such life that the audience naturally slips into her shoes.