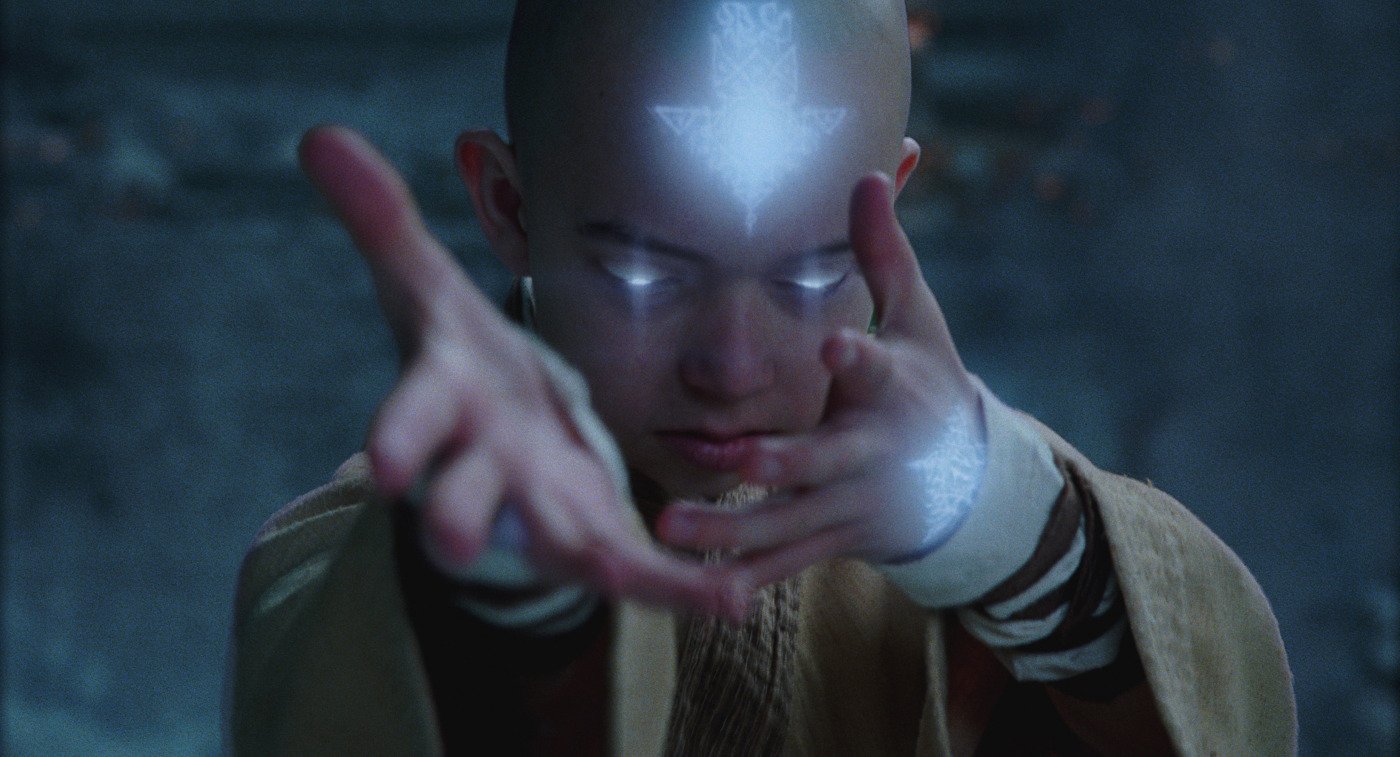 For those unfamiliar with the premise behind the Last Airbender series, here’s a quick summary. Long ago, the four nations of the world lived in peace.  Each tribe had a spiritual connection to one of the four elements: earth, fire, water, and air.  Only one individual could exert control over all four elements.  He was known as the Avatar, and he maintained balance in the world.  However, one day “when he was needed most,” he disappeared, and the Fire Nation rose up and nearly conquered all other nations.  One hundred years later, an eleven-year-old boy emerges from a frozen bubble of water.  He is the last of the Air Nomads and the only one capable of stopping the Fire Nation’s vicious campaign.

The cartoon series that is this movie’s source material makes it clear up front that the manipulation of the elements does not require magic.  It is a birthright and willpower that allows various members of the four tribes to control (or “bend”) their respective elements.  “It is not magic.  It’s waterbending,” Katara says to her brother in the first episode. Well, the movie version is completely devoid of magic in every sense of the word.  It totally lacks a sense of awe, enthusiasm, and above all, the heart that the cartoon delivered with such dependable regularity.

The big downfall of The Last Airbender movie is flawed storytelling, plain and simple.  I’m not a huge Shyamalan fan, but I have always respected the subtlety of his early writing.  Not once did I ever doubt his ability to invest a simple story with deeper meaning – so that makes me wonder why he adjusted his method in writing this movie.  For The Last Airbender, Shyamalan swaps subtlety for over-clarification.  He talks down to his audience, and consequently treats us all like children – particularly stupid children.  His characters constantly explain their motivations: Zuko’s obsession with regaining his honor, Katara’s needy desire to emulate her dead mother’s moral standards, Aang’s guilt for abandoning his Avatar duties.  This unrelenting exposition robs the characters’ actions of any significance, ironically making the characters less dimensional than their cartoonish counterparts.

In the director’s defense, the cartoon had twenty episodes and ten hours to flesh out its story and characters, whereas Shyamalan had less than two hours.  He would have been better off going the Lord of the Rings route and making an epic-length film.  I am sure that a lot of his limitations in recreating the cartoon’s world and epic journey were budget-related. But in my mind, if you can’t make the movie you want to make, then you ought not to make it at all.  He had to know that at least half, if not more, of the audience for this adaptation, would come to the movie to see how he planned to replicate certain pivotal moments from the television series.  So if he intended to reinterpret the final battle and skip Aang’s transformation into a monstrous water spirit, then he should have offered up something a little more than a not-so-epic tidal wave that doesn’t even overturn any enemy ships but somehow manages to scare away the bad guys anyway.

The greatest flaws of all are on the character level.  Shyamalan’s script just drops information into the laps of his audience and hopes that they accept it without really providing the chance to digest it.  Sokka’s relationship with Princess Yue happens over a glance and a snippet of voiceover narration. Aang’s crush on Katara, such an important and driving plot point in the cartoon, never manifests in the movie, and the story suffers for its absence.  The people in Shyamalan’s story are randomly thrown together and the kinship and responsibility they feel for each other never get much attention.  For instance, Sokka initially treats Aang with mistrust and apprehension, yet he takes on the life-threatening mission to escort him to the Northern Water Tribe without much reluctance.  Basically, the haphazard pacing and spotty storytelling don’t allow the heroes the time needed for respect to grow between them.  Furthermore, I would argue that there is not enough time or motivation for relationships to form between the characters and the audience either.  I found it difficult to pinpoint any reason to root or sympathize for Aang and the others.

Perhaps, Shyamalan’s biggest violation involves his misinterpretation of the major players’ personalities, especially in Aang’s case.  He seems to forget that they are kids.  Yes, “with great power comes great responsibility,” but it also comes with opportunities for great fun.  The kids in this movie have no time for fun or to be funny for that matter.  The humor and light-heartedness of the series are missing entirely from Shyamalan’s adaptation.  As a consequence, Aang comes across as a somber, brooding religious figure and not the loveable, always playful sprite he is in the cartoon.

Character arcs also become a casualty of the accelerated pace.  Shyamalan overstuffs dialogue with so much consideration of the past that he fails to have the characters examine their current circumstances. The characters don’t actually learn anything; they just realize their mistakes.  Perhaps, the writer/director intended for them to fully explore their arcs over the course of a multi-movie franchise (a possibility offered by the movie’s final scene), but the film still left me with a nagging feeling of incompleteness when the credits rolled.

Val is a melancholy exploration of Val Kilmer’s career

M. Night Shymalan’s After Earth teeters on the edge of respectability