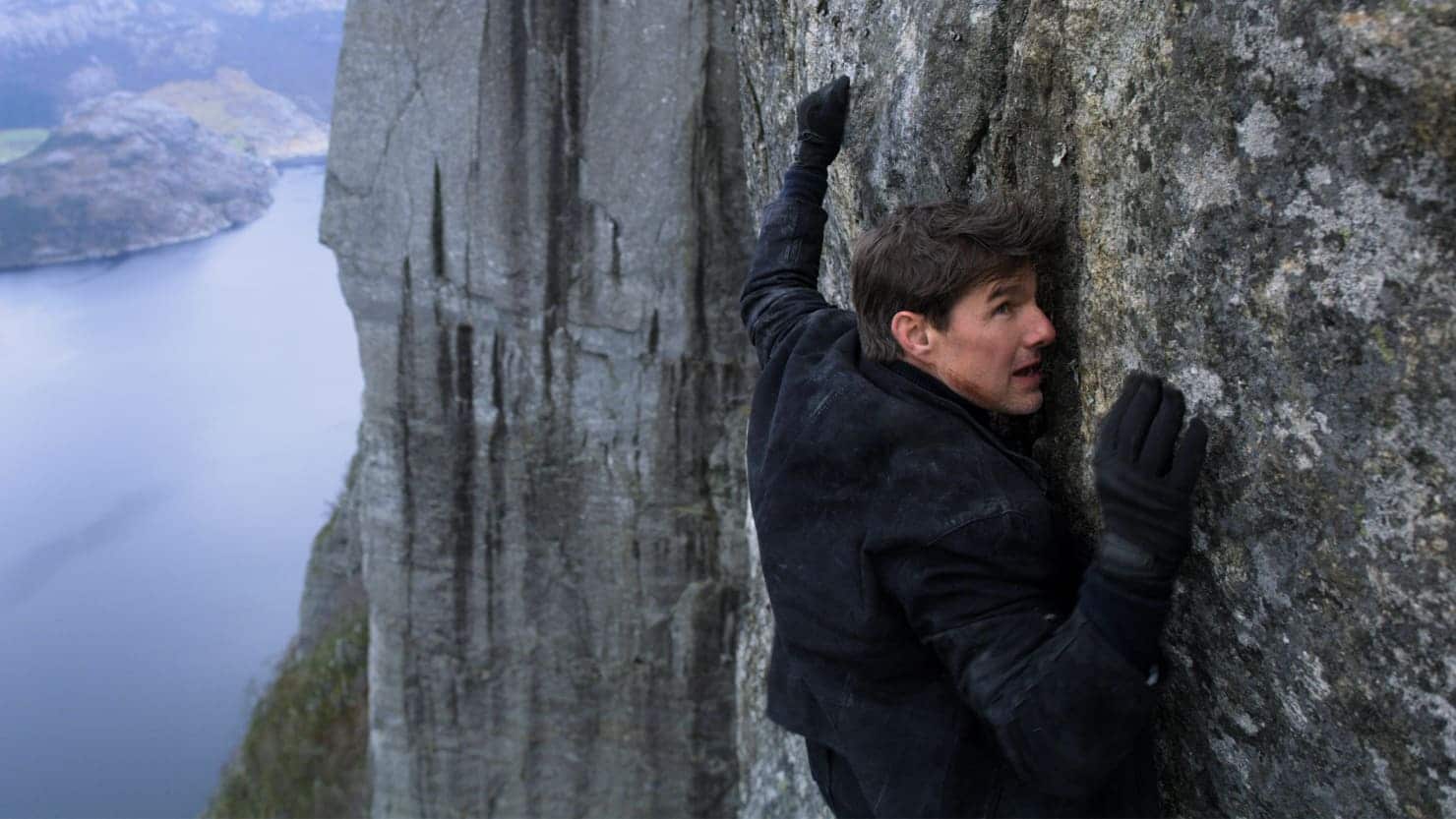 Some missions are not a choice.

All of the relationships that I’ve had, whether they’re familial, platonic, or romantic, have defined me as a person. They define us all, no matter how difficult they may be and how much hardship they have brought. Deep down at the core of Mission: Impossible – Fallout is that same fundamental belief. No matter how much we try to outrun the past, it’s with us at all times. Recognizing the fallout is what keeps us growing. We love those we loved more because of the struggles we endured.

Many will pick up on the call-backs to previous films in the Mission: Impossible franchise. Some are obvious; some less so. They all come from a place of love for the previous films. I am an unapologetic fan when it comes to Rogue Nation, the movie that (in my opinion) runs laps around the four films before it. They all have their moments, some perhaps sillier than others (*cough*Mission: Impossible II*cough*), but they also all have their own unique set of flaws. My most hated decision in the entire series has been what I consider a deep, deep misunderstanding of what made Mission: Impossible as great as it is — i.e, the domestication of Ethan Hunt.

J.J. Abrams has been a producer on the franchise since he came aboard to direct the third film. He made a spy movie with some good action (that bridge sequence is fantastic), but Mission: Impossible III also gave Ethan a wife and had him living a double life, splitting his time between Julia (Michelle Monaghan) and the IMF. How will Ethan Hunt juggle his two lives without Julia finding out about his past? The answer: who cares? It’s just not a very interesting plot point in a series where we want to watch face masks being torn off like it’s the end of Halloween night, someone double-crossed, and Tom Cruise working with a team of other agents. We get these things in III, but they’re all undercut by a subplot involving bad people finding out Ethan has a wife, and then taking her hostage. She’s not a character — she’s a plot device.

Ghost Protocol put Brad Bird in the director’s chair, then took the very serious tone of the third film and threw it in the trash completely. The fourth film is filled with witty banter and action scenes where humor goes hand-in-hand with the tension. The fantastic Burj Khalifa sequence works because it recognizes the insanity of climbing the tallest building in the world by pranking Ethan with an adhesive glove that stops working, as well as Benji’s (Simon Pegg) now-common “Oh, he’ll be fine” dialogue. It’s a very animated-feeling film, where the set pieces are what you remember, and the moments in between might as well not exist. Every time I re-watch Ghost Protocol I forget that the reason Julia even returns at the very end is that Brandt (Jeremy Renner) is supposed to be shocked she’s still alive. Julia’s presence feels tacked on only to serve as a farewell to her as Ethan accepts his next mission over having a “normal” life.

That next mission brings us to the comfort zone. While Rogue Nation is no slouch in its action, its biggest achievement is capturing a pitch-perfect tone that the series has struggled to find over the years. Brad Bird was close, but he used comedy far too excessively — which really highlights the superhuman qualities of Ethan Hunt. It’s hard to latch onto a character’s mortality when he’s laughing at death right in its face. With Rogue Nation, Christopher McQuarrie brought a very well-rounded Ethan, one where his team was his family. He recognized that Hunt is happiest when saving the world with his friends. Once again, I could ramble forever about the way McQuarrie and Cruise delivered one of the most assured action films in recent memory, but then there’s Mission: Impossible – Fallout…

I mention all of these prior films because McQuarrie brings them all to light in Fallout. Julia’s absence from the fifth film becomes a plot point for the sixth movie. Why wasn’t she anywhere to be seen? Apparently, because Ethan needs to be away from her. The movie posits that if Ethan is watching Julia, then who is watching the world? It’s clear that the Syndicate (the shadowy organization that Hunt is hunting in Rogue Nation) is still at large, as The Apostles step into the Syndicate’s place and cause mayhem with John Lark at the center of it all. Ethan needs to stop them.

The final 30 minutes of Mission: Impossible – Fallout feel like the perfect retcon of the entire Julia–Ethan relationship. We understand why they have been separated, and the film uses the fact that they’re finally together in the same place as a negative. McQuarrie firmly cements Ethan as someone who has to move on from Julia.

“There cannot be peace without, first, a great suffering, and the greater the suffering, the greater the peace.” As Solomon Lane (Sean Harris, returning to the villain role from Rogue Nation) leads Ethan and his team to the same location where Julia is, he has created the greatest suffering for Hunt. The only way to save the team is to chase after Lark, but the rest of his team is doomed if he isn’t able to catch both him and a detonator which will cause a nuclear bomb to detonate. Not only will the world be in ruins, but everyone Hunt loves will die. Naturally, the day is saved.

What remains is Ethan’s guilt, as all of the things he has done in the past have caught up to him. His antics have led him to a moment where he almost lost it all. He tells Julia “I’m sorry,” but that just goes to show that he hasn’t learned anything. He’s doing a good thing and he’s saving the world; she knows this, and Ethan continues to believe that all their troubles stem from him. But she’s the happiest she’s ever been doing something she never thought she’d be able to do if it wasn’t for meeting Ethan, and we already know Ethan doesn’t belong in a “normal” life. He belongs to saving the world.

One could argue that the very comfortable Rogue Nation (I find it to be the most rewatchable of the series) feels that way because Hunt is the happiest he can be when he’s just out there fighting the bad guys. And we, as an audience, are as well. We’re enraptured by the stuntwork and the intricacies of the dialogue, but there’s a reason we know almost nothing about Benji, Luther (Ving Rhames), Ilsa (Rebecca Ferguson), Brandt, and Ethan outside of their work for the IMF: it’s not as exciting. The second movie even pokes fun at the fact that Ethan just doesn’t get time away from his job unless he goes off the grid completely. And what does he do in his spare time? Go rock climbing! Ethan Hunt is clearly an adrenaline junkie.

It’s also fitting that Mission: Impossible – Fallout is the movie that feels the most like it’s leaps and bounds above every prior film in the series. It is much more intricately wound than previous movies, with a payoff that accounts for at least the third and fifth movies, on top of Fallout itself. Both Lark and Lane try to take down Hunt by utilizing his past — one trying to create a consequence, and another forcing Hunt to realize the consequences. While Lark attempts to frame Ethan as an enemy of the nation and a terrorist, Lane just wants to watch his world burn and tries to do it without Hunt having any idea it is happening. Our actions define us, and every moment Hunt has been in the IMF is mined to harm him. Lark uses the job, while Lane aims for his relationships.

That Mission: Impossible – Fallout opens with Hunt choosing to save his team over the world is a great example of Hunt’s major flaw and one that Julia helps him realize (with the inadvertent help of Lane). By focusing on those he loves, he can’t always save the world. Sometimes he has to just dedicate himself to the mission, and fewer bad things will happen to those he loves — and he saves the world. Ethan’s flaw is that he cares too deeply about everyone, but there’s a selfishness to him that leaves him creating priority for his closest relationships. This is something that we all do, and that’s what makes Ethan Hunt a relatable hero. We might not be out there saving the world, but we’re doing our best to enjoy life as much as possible — to be the happiest we can be. Ethan, and all of us, learn not to cling to the past. And we’re all better for it.