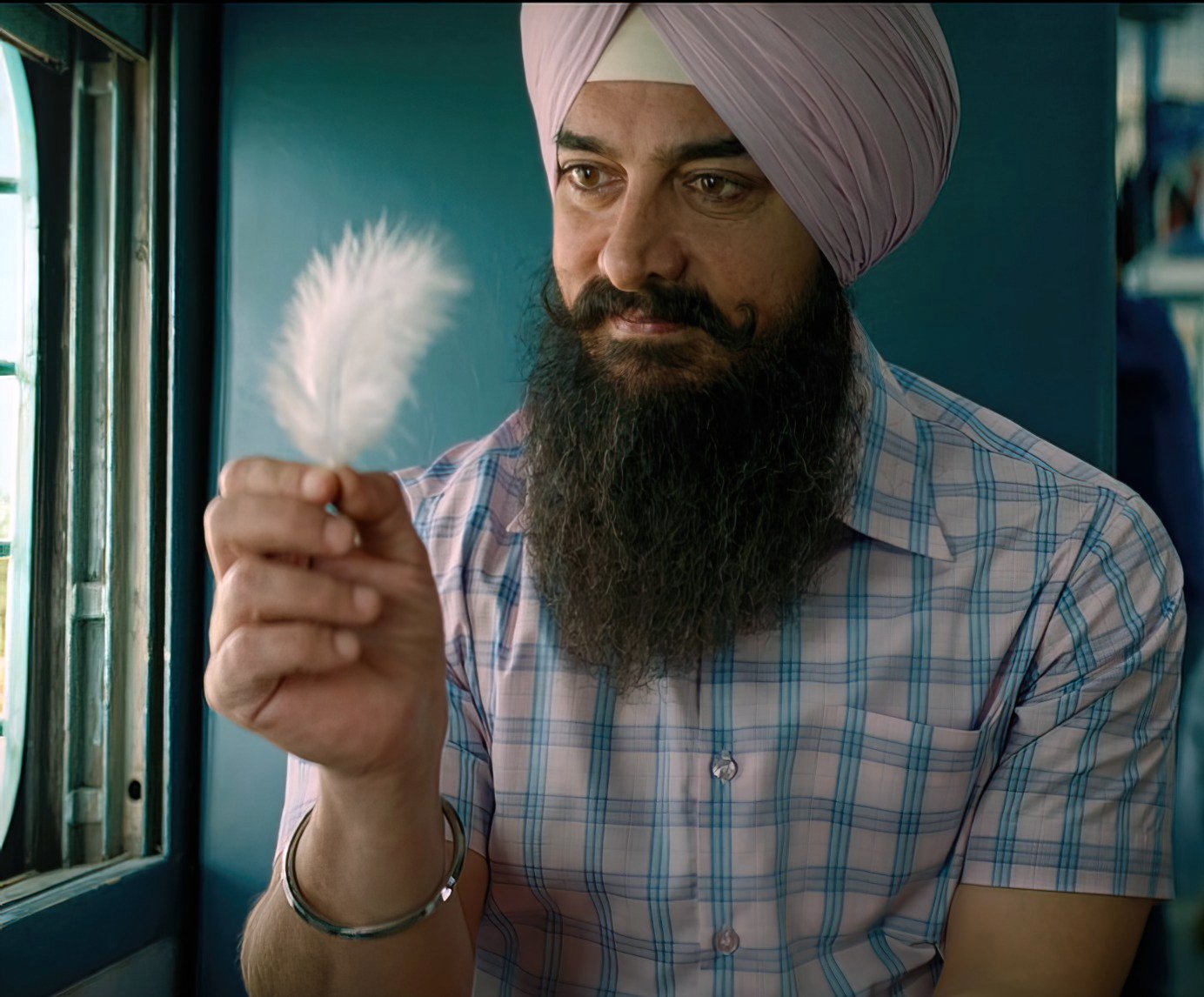 India, much like the United States, is wholly diverse in both geography and culture. The nation possesses a tumultuous, fraught, and violent history that, in one way or another, intrinsically links each of its disparate regions together. It’s pretty much the perfect setting to translate a beloved (and begrudgingly hated) cultural phenomenon like Forrest Gump, which centers on the whimsical and fairy-tale life of an amiable simpleton from humble beginnings, who travels the country spreading love and hope. Swap out Alabama for Punjab (another agricultural state), and Tom Hanks for Aamir Khan, a similarly cherished superstar (although his stardom is more akin to the other Tom) and you get Laal Singh Chaddha.

A more-or-less verbatim Bollywood remake (which received the rare Hollywood stamp of approval) that takes us through the enchanting life of the eponymous Sikh who traverses the nation’s historical incidents with a dreamlike playfulness. It forgoes the original’s timeline, spanning Indian history from the 1970s to the present, as Laal navigates 1984’s Operation Bluestar, its subsequent anti-Sikh riots, and the 1999 Kargil War.

Aamir Khan is no stranger to Hollywood remakes, as his 2008 blockbuster, Ghajini, was heavily (and blandly) inspired by Christopher Nolan’s Memento. But this adaptation is the only one of his that isn’t left in the shadow of its predecessor, as it largely stands on its own.

Laal Singh Chaddha opens with a CGI feather- just like the 1994 original- that lands at the feet of our affable protagonist, who is on board a train from Pathankot to Chandigarh with a red box in his hand. No, it’s not full of chocolates, but with “Gol Gappe”, fried spheres of hollow bread that are cracked open and filled with potatoes, peas, seasonings, and an unappealing (but utterly delicious) sweet and spicy water. While still following the original to a tee, the film never chooses to tack on the obvious Indian parallel (like a box of Mithai), as like those crispy “Gol Gappe” it adds a depth of flavour to what might otherwise have been an uninspired and boilerplate adaptation.

While Laal’s journey traverses the same overarching peaks and troughs of Robert Zemeckis and Eric Roth’s original film, this rendition retains a heartfelt poignancy, whose impact repeatedly registers on the same emotional scale.

Not opting for the lazy route of merely changing the location and cast, screenwriter Atul Kulkarni meticulously immerses the story in the subcontinent’s fascinating historical, cultural, and religious tapestry, creating a wholly vibrant and rich world that both evokes and stands out from Gump’s America. From the up-and-coming star who gets his signature move from Laal to the lovably peculiar friend he meets in the army who can’t stop talking about his family’s business (undergarments instead of shrimp) to his inspiring multi-year cross-country jog (beautifully realized by Satyajit Pande’s cinematography), the film never forgets to imbue its saccharine tale with authentic and vivid truths about the Indian experience.

It’s no coincidence that Laal is Sikh, a religious minority that has historically been marginalized and forced to bear the brunt of the nation’s religious, political, and cultural turmoil. By having him hail from the “land of the five rivers”, his Naivety is directly pitted against the most shameful and bloody incidents of the country’s history. As Laal fosters connections with the multitudinous regions, languages, and faiths of the subcontinent, his story beautifully becomes one of identity, and its reclamation, in addition to the original’s exploration of destiny and hope.

For all the film does uniquely well, there are elements the original still has the edge over, chief among them being Hanks himself. Khan doesn’t possess his range, as his performance, at times, reads as slightly cartoonish. But as we journey with him, his oafish grunt begins to take on an endearing timbre, as his full beard and turban, and honeyed Punjabi dialogue becomes a delight to behold, ultimately tugging at the heartstrings like his American counterpart. Overall, Khan revels in the innocence, eccentricity, and warmheartedness of Laal pleasantly, if a bit amateurishly.

In addition to Khan, Kareena Kapoor as Laal’s childhood love, Rupa, and Mona Singh as his motivating mother both serve the film well, settling into its sentimental aura perfectly. Manav Vij is a standout, as Mohammad Paji, a deft and thought-provoking substitute to Lieutenant Dan, whose insertion emboldens the film’s advocation of religious tolerance to a level just below sanctimony.

Yet, this commentary hasn’t prevented the film from being subject to numerous boycott campaigns stemming from Khan’s past statements about India’s intolerant leanings. However, despite this Laal Singh Chaddha is a vibrant showcase for a nation whose cultural and geographic density is completely unparalleled across the world. Shot in more than one hundred locations and wonderfully aided by Pritam’s exquisite music (with “Kahani” and “Tur kalleyan” being definite earworms) it’s a lovably corny ode to the nation Khan and Laal call home and have the utmost hope for.

The King of Kong: A Fistful of Quarters Found a Great Documentary in a Strange Subculture