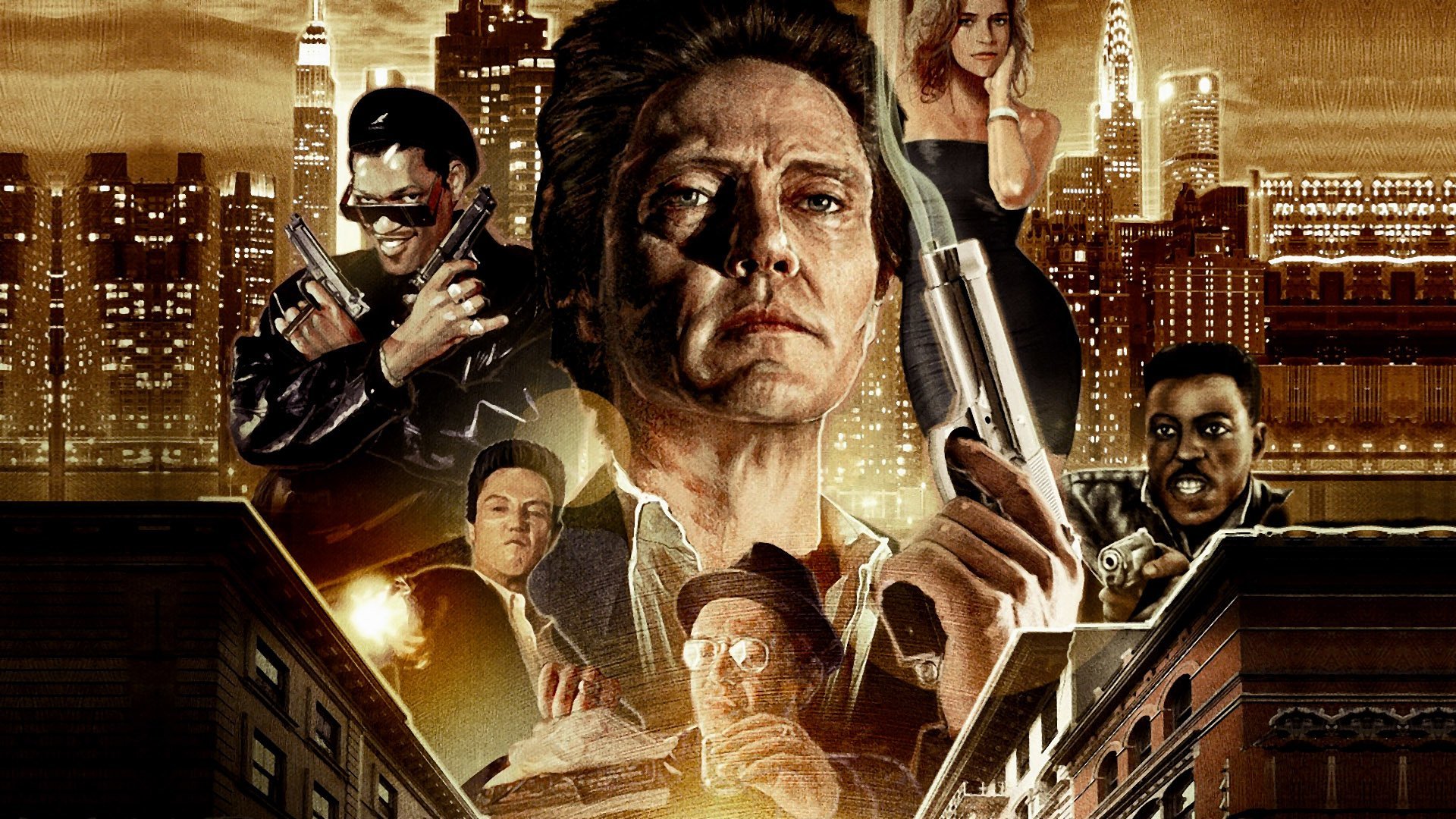 Something of a cult hero among worshippers of ‘video-nasty’ exploitation flicks and latter-day grim and grungy crime flicks, it’s a surprise to learn that Bronx director Abel Ferrara is still working diligently behind the camera, albeit on the kind of B-movie fodder that never threatens to break its way into the mainstream zeitgeist. Beyond his eye-catching if hard to watch Driller Killer debut, Ferrara is best known for the fondly remembered Bad Lieutenant. His best-rounded effort, however, may be the more controversial and divisive King of New York, a slick and stylish slice of understated pulp which earned walkouts at its premiere.

Amidst a wave of crime violence and institutional corruption within a big apple entering a fearful new decade, legendary drug kingpin Frank White (Christopher Walken) is released from Sing Sing with ambitions and dreams bigger than ever. After sweetening his lawful connections to earn a reputation as a legitimate businessman and unlikely philanthropist, he returns to his old gang (led in his stead by Laurence Fishburne’s manic Jimmy Jump) with every intention of wiping out all possible competition and becoming the one and only crime lord. Not driven by greed, his plan is to use the proceeds of his operation to revitalize the poverty-stricken boroughs of his city in an oddly paradoxical show of charity.

He faces plenty of conflict, however, with his enemies represented by Joey Chin’s Triad faction, a group of pesky Colombians, and the local branch of the Mafia. But the greatest threat is the NYPD’s narcotics division, headed up by head honcho and old nemesis Roy Bishop (Victor Argo) and his hands-on lieutenants Gilley (David Caruso) and Flanigan (Wesley Snipes), who have an axe to grind and unprofessional debts to settle by any means necessary, even if it means taking the law into their own hands in the name of the greater good. As White starts his Robin Hood inspired a wave of violence in battles staged between debauched party nights, he has to contend with double-crossing and treachery from within his own group as his grand plan’s reward proves fatally elusive.

It’s worth mentioning that the negative notoriety which engulfed King of New York upon release wasn’t due to any kind of distasteful content but instead was down to the tone and timing of a film which makes its moralistic judgments subtle and underscored during a time period when the titular city had become a fearful haven of criminal violence. For much of the film’s run-the-drugs-and-guns lifestyle of a released criminal is given a glamorized tint despite the very real political backdrop, and many a disgusted critic latched on to the apparent hero treatment that Walken’s White is granted during his illegal enterprise. Given that over thirty years have passed, it’s a lot easier to be objective about a film that while finessed and cinematically alluring is far from amoral, even if it only spells out its understated message in the closing seconds.

Timing, it seems, was crucial. Ferrara’s epic takes the kind of stance towards the life of crime employed by films never criticized so fiercely, whether it be the glitzy Scarface or the same year’s more introspective (and indisputably brilliant) Goodfellas. The second example is quite apt since both films tell of the fruits of illegality and villainous empire-building in a manner that doesn’t justify drug rings and organized crime but merely expresses the appeal. The fact that the film concludes with White getting himself needlessly killed after an attempt to display his dominance to a figure of the law is in of itself a sign that Ferrara in no way views ‘the life’ as being any kind of great profession. The ending, anti-climatic cinematically and from a storytelling point of view, is appropriate and leaves the tale with no winners.

That’s not to say that it doesn’t hit the mark, and is a suitable conclusion to a superbly drawn and lovingly shot fable that is as much apocryphal legend as the grandiose name would suggest. In many ways, the basic spine of the movie is a story from another time, with the comparisons to Robin Hood being quite apt. Frank White is a self-appointed man of the people who, while loving the drinks, drugs, and sex of his chosen profession, dreams bigger and sees himself as a savior to the roots he emerged from. These delusions of grandeur aren’t hammered home as such by the director’s eye, should be clear enough to any thoughtful viewer as they witness scenes of unnecessary overkill, regrettable fatalities of family men, and the deep regret of betrayal. His ambitions are born of an inherent contradiction, the desire to rebuild community using a business that is crippling the little man, and all he really achieves is some personal glory and a horrifying body count which pushes men to desperate measures out of disgust and personal pride.

Ultimately, King of New York deserves to be regarded as a crime epic, grand in scale, and characterization with a level of symbolism and purposeful message that makes a mockery of the vitriol it faced in its infancy.

Christopher Walken is perfectly cast as White in this respect. An actor with a wacky public image and penchant for playing darker shades, Walken never stands fully in the light and this works brilliantly when portraying a character who could potentially come off as an anti-hero when at the very best he is an anti-villain. A more centered lead may have given the wrong impression about the protagonist, but with Walken reveling in White’s excesses, there’s always a nastiness and unpredictability which stops us from fully sympathizing or rooting for him. He’s a good guy only in his own vision of the world, and Walken imbues him with a sinister undercurrent which means we never forget who we are truly watching.

A well rounded and distinctive supporting cast also provides entertainment, with Laurence Fishburne notably and wonderfully over the top form as hoodlum turned big cheese Jimmy Jump, childish and impish in his manner but near-psychotic in his method. David Caruso makes an impression as the ringleader of the more amoral wing of the NYPD, this being a highlight of his short-lived assault on Hollywood, and there is a big break for Wesley Snipes as his right-hand man. Future TV stars Giancarlo Esposito and Harold Perrineau have small roles, as does Steve Buscemi. There’s always something of interest on screen, even if it’s just material for a round of ‘Hey, it’s that guy!’

Hardly a surprise given his origins as a filmmaker, Ferrara shows a real flair for action and violence too, and the set pieces in the film which include gangland battles reminiscent of war films and cat and mouse car chases of taut suspense are visceral and thrilling. Likewise, the visuals and cinematography are grand and at times spectacular, providing both aesthetic delight and defining character shots. The film’s iconic visual of White surveying his land through the reflective window of his luxurious high rise apartment is both a gorgeous image and a distinctive flavor of the character’s darkness. He, simply put, looks evil.

Ultimately, King of New York deserves to be regarded as a crime epic, grand in scale, and characterization with a level of symbolism and purposeful message that makes a mockery of the vitriol it faced in its infancy. As a piece of cinema, it’s part of the great visual flair that marked the transition of decades and also an involving and hugely entertaining genre piece. In effect, a great film despite its questionable punctuality, and a timeless work of art.

For more on King of New York, we recommend the episode of the Sordid Cinema podcast embedded below!

Pretty In Pink Remains a Powerhouse Depiction of Teenaged Life