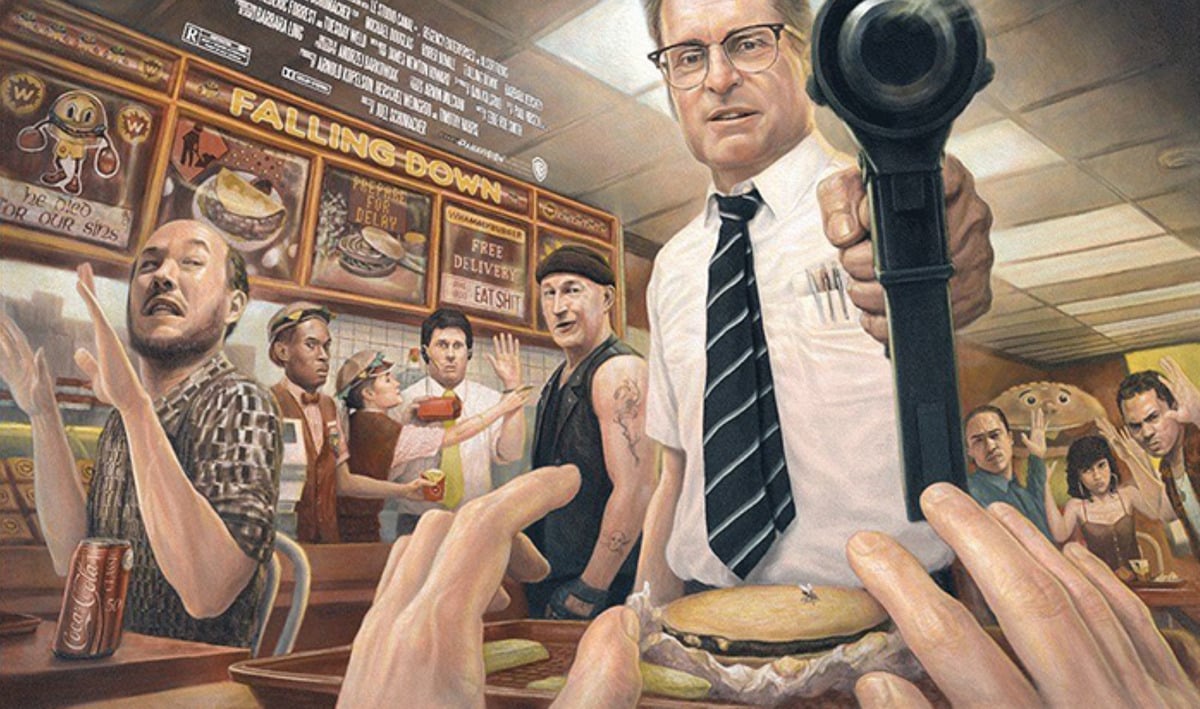 As a trilogy, Christopher Nolan’s Batman ‘reboot’, a concept which has since become a common trend, not only raked in the cash and earned a huge following, but it also undoubtedly redeemed the Caped Crusader’s image and film status, representing ‘mission accomplished’ for the Director. After all, his remit when taking on Batman Begins in 2005 mostly comprised of wiping out the ghastly memory that was Batman and Robin.

The 1997 monstrosity has since become the film Joel Schumacher will always be remembered for, unfairly perhaps. The legacy of the flop casts a huge shadow on his career, to the extent that Schumacher has since apologized for the ‘so bad it’s good’ sequel, the rarest of sentiments in the filmmaking industry. It makes you wonder how different things could, and should, have been.

An energetic auteur with a preference for flair, Schumacher himself was tripped up and turned the wrong way by a remit of his own, a demand to lighten things up after Tim Burton’s nightmarish Batman Returns. The irony is that, only four years earlier, he had already covered the territory of a morally questionable vigilante figure taking a violent fight to larger than life villainous enemies, and with a better grounded, emotionally driven heart. His best film shows that there was never any warning that his worst film could have been so terrible it torpedoed an entire franchise.

But make no mistake, 1993’s Falling Down is no hero’s journey, and Michael Douglas’s Bill ‘D-Fens’ Foster is not a methodical enforcer of justice. A tale of feral, uncorked rage and frustration against life and all those who inhabit it, the film tells a post-LA Riots story of an ordinary man who one day simply snaps, and embarks on a bloody, fruitless quest across the rotting City of Angels so he can attend the birthday of his young daughter.

It plays out like a modern retelling of the Odyssey with an undercurrent of Greek Tragedy and brutally heavy-handed social commentary. The wife at the end of the journey, or family, in this case, is estranged from the protagonist, and his eventual return is not welcomed. Each of the challenges and enemies that he faces represents facets of a crumbling, morally bankrupt society, one that D-Fens challenges and condemns while brandishing a growing arsenal of weapons. Circe, the Sirens and Scylla are replaced by vengeful Hispanic gangbangers, petty fast food bureaucracy and indignantly wealthy golf club patrons.

In effect, Falling Down proves to be a theatrical deconstruction en masse, a film that poses some serious questions to various different subjects. As viewers, we are left to muse on our own morality as we cheer a deranged middleman serving out disproportionate retribution to individuals when the source of the angst and anger is actually the concept they represent. The antipathy and neglect of common respect depicted is put into sharp focus, drawing attention to how as a society people have grown to loathe each other and develop a permanent air of passive-aggressive disdain. And even cinema’s most common archetype, the mild-mannered normal man pushed to his limit, is not safe from the dissection. Initially appearing to be ‘like one of us’, D-Fens proves to be so to an uncomfortable degree, bearing the baggage and darkness that ensure none of us can really be considered pure. He’s a flawed figure even before shooting up a phone booth, hardly an ideal candidate for philosophical and political objectivity.

A surprising aversion to this pattern comes in the form of Robert Duvall’s hot-on-the-heels Detective, Prendergast. This is a character who is the ultimate cliché, being that it’s his last day before retirement. Yet the film somehow bypasses this trite setup by actually giving far more depth than one could possibly expect. He isn’t of the ‘I’m too old for this shit’ variety. In fact, he doesn’t want to retire at all and is only doing so for the benefit of his hypochondriac wife. Beaten down and quiet, Prendergast is a desk jockey cop whose very existence provides a very poignant mirror to D-Fens. Both have been dealt a bad hand in life, have strived towards the goals set for them, and yet have nothing of worth to show for it, and are constantly tested by their surround. But while D-Fens tots an Uzi and induces carnage and chaos, Prendergast carries on, keep it together. It’s fitting that he’s the first one who becomes aware of Foster’s rampage, a crime spree barely noticed amid the lawlessness in the city.

Where D-Fens himself stands on all this is deliberately nebulous. A highly memorable encounter with a Neo-Nazi surplus store owner (played with aplomb by Frederic Forrest), while entertaining and suitably creepy, also gives the protagonist an unflinching look at the byproduct of his actions, at the sort of people he is inspiring and could easily be himself. Later, he unintentionally traumatizes a young family and is horrified by the fear he causes. When at the anti-climactic, hopeless finish line, he is made to face the reality of what he has done, is confronted with the setup, and despairingly asks “I’m the bad guy? How did that happen? I did everything they told me…” Your mileage may vary on whether this is the curtain of denial being torn from its fitting, or another cruel twist of fate from a harsh, vindictive world. If Foster is your anti-hero, you can find yourself railing against a system that casts him as the villain. If he truly is the psychopath the authorities view him as you fear the underlying point; this could happen to anyone.

It’s this sort of thoughtful meditation and desire to push uncomfortable themes and notions that make Falling Down stand out from a crop of similar, more black and white features with nothing like the same level of depth. Viewed in two-dimensional terms, it can be seen as over the top and exaggerated, exhibiting a conveyor belt of cartoon-like asshole victims that justifies the acts of an anti-villain protagonist. It’s true that the film certainly does fall back heavily on certain stereotypes, even by the standard of the era it was made in, but such nitpicking rather misses the point. Each antagonist is a figurehead, little more, a manifestation of a wrong that D-Fens cannot stop himself resisting, then challenging, and ultimately punishing. There are some kudos due to Schumacher for not insulting the audience’s intelligence and making an obvious show of the fact that these are human beings being killed, maimed, and tortured.

Having Michael Douglas and Robert Duvall in such fine form, playing what is essentially the same character but going in vastly different directions and displaying hugely contrasting energies, also gives the film an extra level of pathos. Douglas in particular goes strongly against type, almost unrecognizably in fact, and plays a huge part in the film’s success. It is mostly down to his subtle touches and torn morality that we can find such sympathy for the character, and without this Falling Down would be dead in the water. His character’s ultimate conclusion is overwhelmingly sad, but also perfectly fitting, with an unspoken and retrospectively crushing blow adding the final injustice. Nobody wins, ultimately, in this film. Some people just lose better than others, regardless of whether they were right or wrong.

Having conducted such a thoughtful and well-balanced film, it is hard to believe that Joel Schumacher could have such a hard fall in such a short space of time, all while traversing ground he’d already conquered. Falling Down suggests that his take of the Dark Knight would be an uncompromising character study of Bruce Wayne and the real motive behind his justice-wielding, questioning who the real villain is. Instead, we got ice puns and Bat nipples.

Considering how well the reboot did, maybe it was for the greater good…

Brian and Charles: A Charming Jaunt of Loneliness, Robots and Cabbage