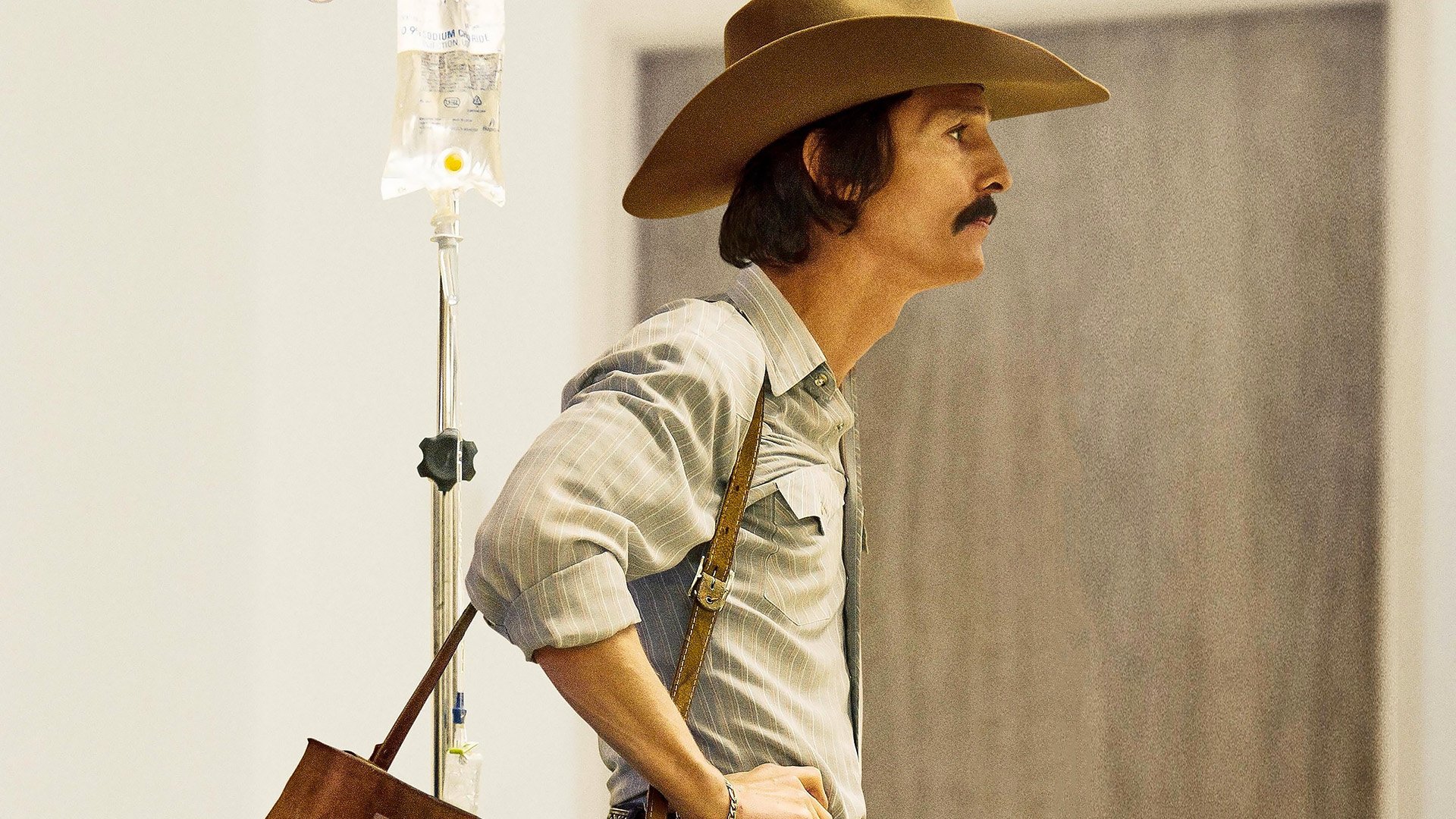 Dallas Buyers Club is an important film. Not because it tackles AIDS or bigotry or pharmaceutical companies or preservatives, although it does all that and more. It’s important because it shows one man who manages to overcome a 30-days-left-to-live prognosis and make a positive difference, all while being a real jerk, to put it politely. Based on a true story, the material could have easily fallen into a Lifetime movie or docu-drama or redemption story mode, but Jean-Marc Vallée’s effort is a compelling film about a real antihero, an alcohol and drug-abusing, flaming heterosexual Texan who contracts H.I.V. and lives to help himself and those around him, in that order.

In 1985, Ron Woodroof (Matthew McConaughey) drinks, snorts, and consorts without a care in the world. He gambles, he fights, he’s in a murky area with the law, he’s done some bull-riding; in a way, Ron is a modern cowboy, not the John Wayne kind but the ruthless, quick-to-anger and danger kind. Don’t let a 47-pounds-lighter McConaughey fool you; the guy still throws a mean punch and gives a rough shag. But what sets Ron apart (and partially why his story is now on the big screen) is that underneath all of the liquor, cocaine, and illegal gambling, he’s a decent person. When a co-worker who’s an illegal immigrant gets caught in some heavy machinery, Ron’s gut instinct is to get an ambulance, whereas his other colleagues do nothing but stand there, the more sympathetic ones giving the poor guy some booze for the pain. With this little seedling of humanity, you can see a bit of McConaughey in the wiry, drug-fueled electrician, an element that carries the audience through the rest of the film.

Ron ends up in the hospital after a dizzy spell and wakes up to the news that he has H.I.V. and roughly a month left to live. Ron reacts to this literal death sentence not just with anger, but a real full-blooded homophobic cocktail of rage and denial with a side of an R-rated bender. Still feeling a bit off, Ron heads to the library and does some research, finding out that, as a participant in extraneous drug use and unprotected sex, he could indeed have “that gay disease”. At that moment, he lets out one loud expletive-laden yell and shakes off the denial but keeps the unadulterated rage. This is the fuel that keeps him going, from trying to force his way into an AZT clinical trial to illegally purchasing AZT (in 1985, the only drug in the U.S. that could possibly treat HIV and AIDS), going to Mexico, and finding better alternative medicines, traveling the world for more alternatives, and finally to fighting various government agencies and big pharmaceutical companies in order to supply these medicines to others battling the disease. Along the way, Ron continues his research on surviving with HIV and later AIDS (focusing on immune build-up), starts the titular club (an ingenious way to bypass drug laws by charging club members a $400/month subscription for the alternative medicines), and elongates a countless number of lives, all without FDA approval.

Of course, this story would not be as strong without other perspectives, and the film includes a very complementary supporting cast. Jennifer Garner plays the sympathetic Dr. Eve Saks, a doctor who cares deeply for her patients (at least compared to her more bureaucratically inclined colleague Dr. Sevard, played by Denis O’Hare) and has extra emotional investment in the AIDS epidemic as her close friend is one of the HIV-infected patients involved in the AZT trial. Dr. Saks manages to juggle the medical establishment pushing AZT (with pharmaceutical money oiling the wheels) and Ron’s attempts to not only steal away her patients but woo her now and again, as anyone next to Garner is wont to do. Garner brings a deep earnestness to the role that negates what could have been dismissed as a goody-two-shoes character and makes her the sort of near-neutral but caring voice that would be the most relatable for the general audience.

Dr. Saks’ infected friend is Rayon (a gaunt Jared Leto), who Ron meets during one of his many abrupt hospital visits and is cleaned out by in an impromptu card game. Outwardly, Rayon epitomizes the effeminate homosexual stereotype that Ron hates and fears, but inwardly, Rayon is just another damaged soul like Ron, albeit more heartbreaking. Ever trying to turn a good buck, Ron uses Rayon to tap into the local HIV-infected scene for dealing some Mexican alternative medicines. It is also through Rayon that Ron begins to feel more sympathy towards those infected and less hatred for homosexuals. Looking past his spot-on clothing and makeup (looking a bit like Zooey Deschanel at times), Leto taps into the character and captures Rayon’s nuances and vulnerability, nearly outshining McConaughey. Not to spoil it, but there’s a scene at a bank that is transcendent. Other standouts include Kevin Rankin as Ron’s still-bigoted former friend T.J. (who, in a pivotal scene, is used as a device to show exactly how far Ron has come) and Steve Zahn as the one police officer who doesn’t hate Ron’s guts.

Throughout everything, Ron never loses his rage and McConaughey never falters in playing this rough albeit charismatic ever-salesman. On paper, the lying, cheating and stealing Ron should be repulsive, but McConaughey manages to bring forth his irrefutable resolve, his most nearly redeeming quality. The real beauty of the character is that there is no real knight in shining armor moment, though Ron comes pretty close when he defends Rayon’s honor. He is an authentic human being who manages to do great, good and not-so-good things, in spite of himself. In a string of roles that have given McConaughey some dramatic cred (Bernie, Magic Mike, Mud), Ron is the one that will stick and mark a pivotal point in his career, probably with some awards attached.

Dallas Buyers Club is a film that all men, women, and young adults should see. It’s the sort of film that enlightens and entertains while still staying true. Vallée manages to capture the immediacy and severity of Ron’s condition without falling into the pitfalls of a morality tale or the possibility of exploiting subjects that somehow, decades later, are still considered taboo. Whether you’ve been through or witnessed illness, you know you can’t fight it lying down, even when physically that’s almost all you can do. You have to fight hard, with all of the knowledge and research you can get in your corner. If there’s a moral to this story, it’s that anyone can do that, no matter your education or socioeconomic level. Ron managed to withstand seven years of HIV and become a walking medical and pharmaceutical encyclopedia with little more than a seventh-grade education and resolve. As a tribute to his legacy, Dallas Buyers Club has managed to withstand 20 years of being stuck in the project stages and become one of the best films of 2013 with a mightily talented cast and crew.