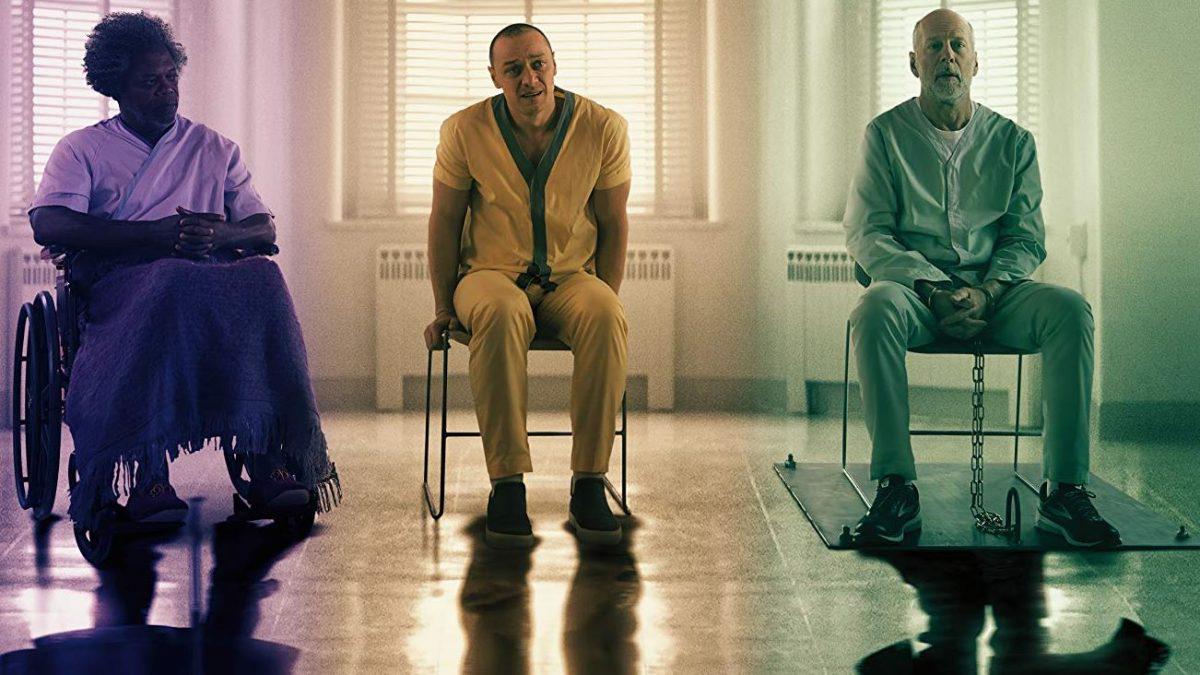 The surprise ending of M. Night Shyamalan’s Split teased a good deal of interesting potential in the crossover opportunities with the director’s own Unbreakable, an artful (if at times plodding) story about the possibility that superheroes may actually roam among us. Between Bruce Willis’ mopey strong man, Samuel L. Jackson’s maniacal mastermind, and James McAvoy’s cavalcade of cartoonish personalities, the possibility for some dynamite dynamics had been established; so how would this super-powered relationship triangle of good, bad, and ugly function when thrown into an all-new plot together? Unfortunately, Glass never really takes the opportunity to find out. Though a compelling atmosphere suggests that meaningful moments are always right on the verge of happening, a fractured script gets too mired in rehashing old themes, resulting in a mild-mannered diversion that dreams of former superpowers.

Tying together threads separated by nearly twenty years was never going to be easy, but Shyamalan does a remarkable job with the setup. David Dunn has apparently been operating a private security business with his son, Joseph (a grown-up Spencer Treat Clark), as a front for his vigilante tendencies. Now on the trail of The Horde after the recently depicted events of Split, Dunn trudges through the industrial neighborhoods of Philadelphia, brushing against passersby in hopes of sensing the evil within. The hoped-for confrontation is a bit of a let-down — grunting and pushing isn’t exactly the most exciting way for superhumans to fight — but after the two are taken into custody by the local police, it seems like the real games can finally begin. The pair is handed over to an obviously mysterious psychiatrist, who brings them to the same mental institution where Dunn’s nemeses, Mr. Glass, has resided for the past two decades. Separated and contained in rooms constructed to exploit their perceived weaknesses, the good doctor embarks on a form of therapy designed to dissuade these weirdos that maybe their uniqueness is all in their heads.

Of course, those having seen the previous films in this trilogy will know that isn’t true — Unbreakable dealt with the subject of doubt quite thoroughly — but for some curious reason, Glass goes back to this well. A lot. In fact, the entire film seems based around thematic material that has already been covered, only now it’s complicated by having to juggle extra characters and strange subplots. Shyamalan acts like we haven’t been through this before, as if we’ll feel the same unearned uncertainty his characters have. Writing has never been the filmmaker’s strong suit, and while audiences shouldn’t find themselves cringing at dialogue outside the occasional comic book sermon, this time it’s the structuring that lacks refinement. Shyamalan puts three interesting and distinct characters in the same building together, but seems to have no idea of where to go next. Isolated in their rooms, the trio hardly gets to interact, sapping the strength of the premise as time goes on.

That’s a real shame because the principal actors have brought their A-games, clearly delighting in playing these fellows again. Willis brings a much-needed twinkle of life to the eyes of his stoic warrior, and Jackson finds a way of betraying Glass’ scarily devious intelligence even behind a near-comatose stare (he’s criminally underused in his own movie). McAvoy naturally has the showiest role, and comes off even more confident here alternating between The Horde’s myriad of personae, deftly changing identities as if he has them on a switch. These three manage not to fall prey to the melodramatic seriousness that normally works its way into Shyamalan’s work, but Sarah Paulson (as the doctor specializing in comic book-itis) and Anna Taylor-Joy (reprising her role from Split, only without the edge) aren’t quite so lucky. Unfortunately not given much to do besides deliver exposition or pretend that a sudden, bizarre relationship is now somehow a thing (I’ll let you figure that one out), their gravity seems to come more from the director’s chair rather than organically.

Still, the actors are eminently watchable, and bringing characters like Joseph and Mrs. Price back in substantial roles really connects Glass to its predecessors in a way that only furthers the aura, creates mystique. It’s the kind of film fans of the others will surely want to like, simply because on the surface it seems to be doing things right. Outside those superficial elements, however, Glass feels rushed, not thought out properly — a product born out of opportunity rather than passion. The visuals are the most drab of Shyamalan’s career; he found more variety in the claustrophobic corridors beneath the Philadelphia zoo than he does in the sprawling psychiatric hospital, never really exploring a space ripe for twisted compositions. Instead, he settles for repetitive close-ups that place the burden on his capable stars’ faces.

He has to; there really isn’t much else going on in Glass other than a thematic retread and some oomph-less action scenes. The enjoyment is smoke and mirrors, pleasant by association — there’s nothing behind the curtain. After refreshingly narrowing his focus for The Visit and Split, Shyamalan here has reverted back to wannabe prophet, trying to deliver an important message to a world he believes is still thirsty for his wisdom.  He tries hard to convince us that he has something important to say, but curiously does so with a climax that is mistaken in the belief that it’s important to see. What is supposed to inspire awe is barely meme-worthy. He has misjudged significance yet again.

The emptiness doesn’t make Glass unwatchable — merely disappointing. The air of mystery is just enough to engage, but while professing his superior knowledge of the historical magnitude of comic books, Shyamalan forgot to tell a story worthy of his premise; his Holy Grail is an empty cup. Too bad, and many will view the perfectly mediocre Glass as the filmmaker himself is sometimes perceived: brimming with potential that once more isn’t realized.

M. Night Shymalan’s After Earth teeters on the edge of respectability

Split packs in the fun as it unleashes the beast