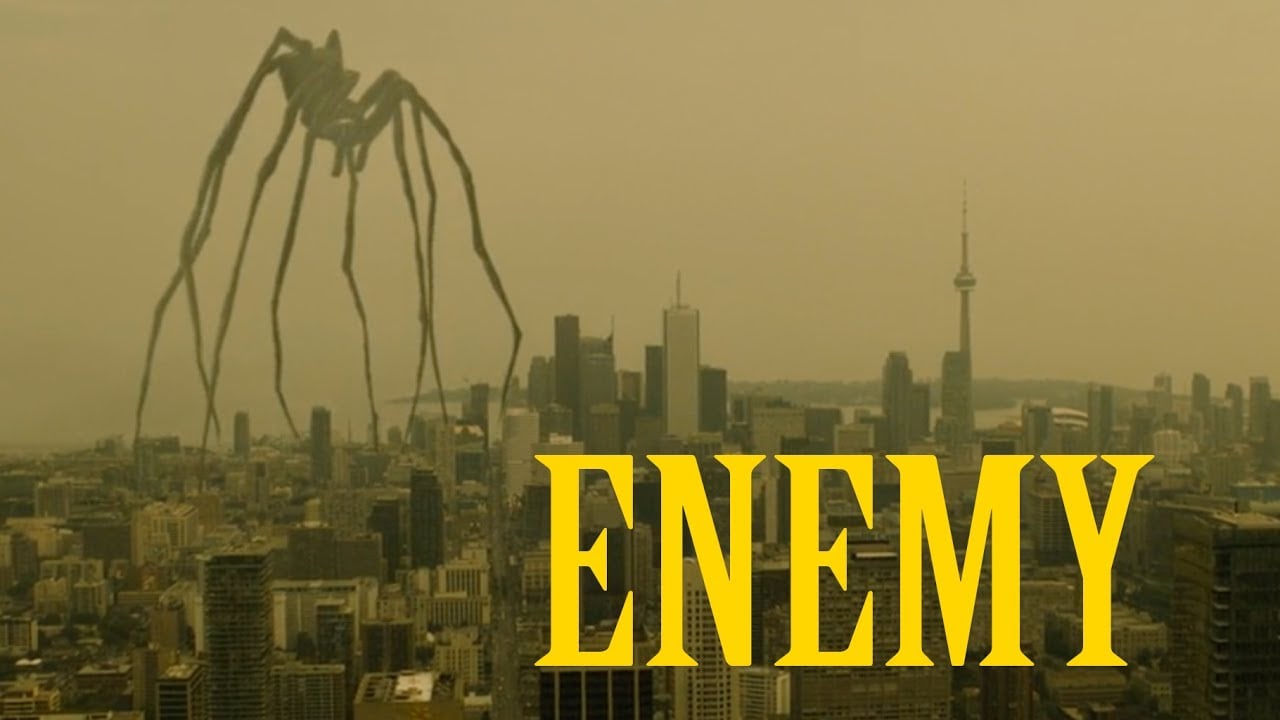 An analysis of Denis Villeneuve’s Enemy

Enemy belongs to a subgenre of cinema known roughly as Well-Made Movies That Should Only Be Consumed Once. No doubt, this nightmarish suspense thriller is designed as something of a puzzle box, offering up clues as to what’s really going on to the dual protagonists (if there even are two of them). So it might seem like this is a candidate for rewatching over and over, poring over every little clue of each possible theory. But in potentially paying homage to the films of David Lynch, director Denis Villeneuve has crafted a movie so unnerving that, to sit through it twice, might just be too damn unpleasant. Enemy is a disturbing and tense experience, almost too much so.

Jake Gyllenhaal, reuniting with Villeneuve after Prisoners, plays Adam Bell, a dry and inward history professor in Ontario, Canada, whose life consists of repeating the same lectures to his students, going to his bleak and desolate apartment, and having sex with his girlfriend (Mélanie Laurent). One day, upon a colleague’s suggestion, he rents a movie that would be otherwise forgettable if not for the background player in one scene who looks exactly like him, except for being clean-shaven. Against all logic, Adam finds out that he’s not just seeing things—this man, Anthony, seems to be his exact double right down to a scar on his chest.

You can’t escape Yourself!

Though maybe, Adam is seeing things, and maybe Adam is actually Anthony. (Or the other way around.) The differences between the two men are, at all times, mostly subtle. Anthony is, or presents himself as, more confident and a bit more fun-loving, from his leather jacket to his sporty motorcycle; Adam is shy and awkward when dealing with Anthony or his pregnant wife (Sarah Gadon). Villeneuve and screenwriter Javier Gullón juxtapose the switched-identity story alongside some increasingly disturbing imagery, from an opening sequence at a darkened sex show wherein a woman interacts with a hairy spider, to a number of dreams Adam has, one of which includes a mammoth spider hovering over the dingy yellow city skyline. Yes, Enemy is maybe not an arachnophobe’s best choice at the multiplex; in spite of the eight-legged symbolism connected to Adam and Anthony, it’s still going to be somewhat off-putting and unpleasant for anyone who just can’t stand these creatures.

When Enemy was released, much was made of the film’s ending. Here, as throughout the rest of the film, Villeneuve is in far different, weirder territory than his American debut, Prisoners, which often felt like an extended, grimmer episode of a Law and Order-esque procedural. It’s hard not to spot a Lynchian influence throughout the proceedings. (Casting Isabella Rossellini as Adam’s mother—or is she Anthony’s mother?—only heightens that influence.) Unlike Lynch’s best films, such as Mulholland Dr. or Blue Velvet, though, Enemy lays most of its clues out in plain view. The final two shots of the film are more oblique, but easily the freakiest and most unexpected. Specifically, Gyllenhaal’s last reaction is an intentional Rorschach test; it could be horror, acceptance, or anywhere in between. The rest of Enemy is somewhat menacing and patiently paced, but not nearly as mysterious as the finale.

Gyllenhaal, on screen for almost every shot, plays two sides of the same coin quite well; though Laurent and Gadon have a few memorable moments, this is almost entirely a one-man/two-role show. (These most prominent female roles are primarily utilized as sex objects; Laurent is on screen more than Gadon, and has very little dialogue; we first see her character having sex with Adam, over and over, from night to night.) Initially, perhaps, the most intriguing aspect of Enemy is how quickly it was made, inspired by Gyllenhaal and Villeneuve’s working relationship on Prisoners. Now that it’s been out for years, the film aspires to be more than just a quickie the two men made on the side. The irony, then, is that while Enemy’s closing moments are the most unforgettable precisely because they serve to oppose any logical explanation, they represent a fine reason why this movie, as carefully constructed and disturbing though it may be, isn’t an easy option for multiple viewings.

Denis Villeneuve’s Prisoners is Soaked in Blood, Grief and Deception