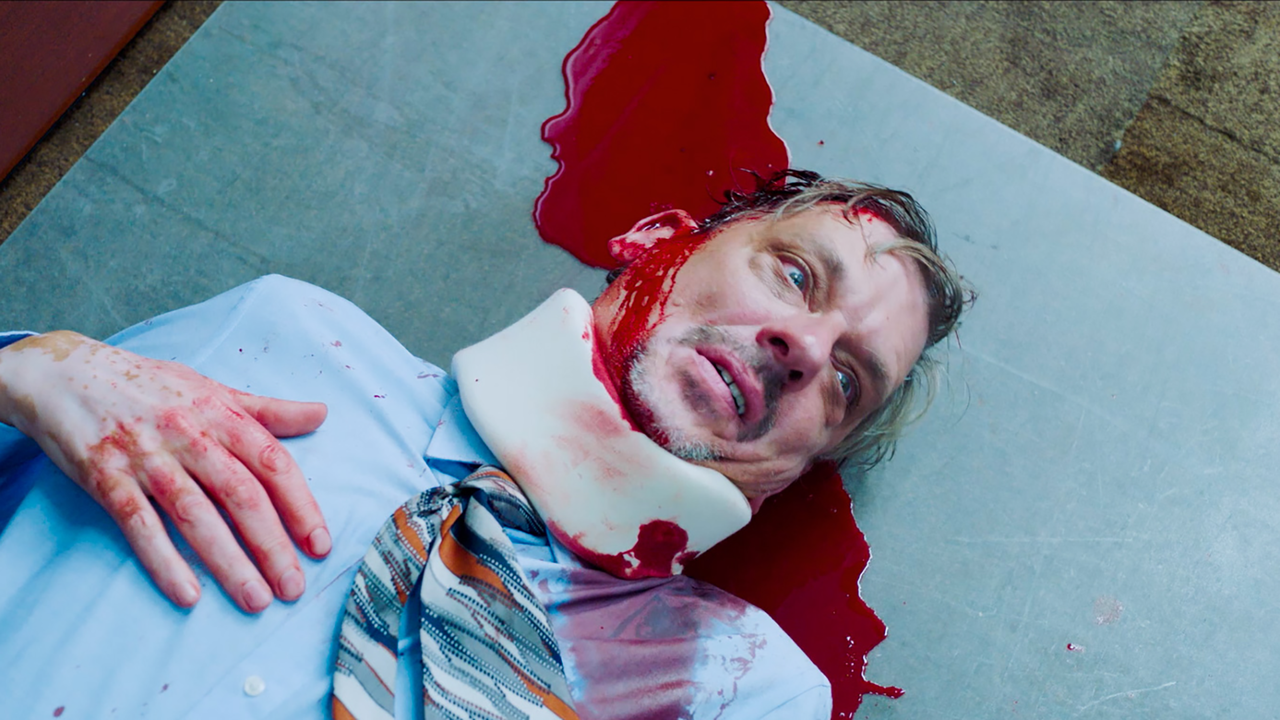 Offices suck. For those with jobs that allow it, the pandemic-fueled move to work-at-home and hybrid models prove that getting out of the house once in a while is nice but constant managerial oversight and fluorescent lighting remain a soul-sucking endeavor. Employee of the Month (L’employée du mois) certainly understands this and has all the components of a small-scale comedy that punches above its weight class but an inelegant execution has it taking a lot of swings that don’t connect.

Like the employees of her film’s cleaning company EcoCleanPro, director Veronique Jadin attempts to do a lot with a little. A small, concentrated cast and single location allow for a budget-friendly production that leans on the screenplay to give depth and texture. Jadin takes the established trope of the workplace comedy, infuses it with a Coen Brothers-inspired bloody farce and stirs in a contemporary feminist angle. The result is a largely enjoyable but clumsy dark comedy that never quite finds the right balance.

Ines (Jasmina Douieb) is a dedicated 17-year employee of the male-dominated cleaning supply franchise. She finds comfort in her routine and the alacrity with which she single-handedly keeps her wobbling-plate male colleagues atop their corporate perches. It’s when she’s passed up for a raise one too many times, despite her dick-swinging co-workers all getting a hefty pay bump, that she decides to pop a Viagra and let loose. Her second-wind confidence is deflated by an unwelcome advance from her boss that leads to an unintended vengeance that results in a bloody mess. Luckily, EcoCleanPro has plenty of products to scrub the scene but each time she, and skeptical intern Melody (Laetitia Mampaka), make a mess they find it harder and harder to clean up.

Ines, once the young, hot face of EcoCleanPro, is now its unappreciated matron; a living mural of the invisible woman. She thanklessly manages tasks, normally the jobs of several employees, with aplomb. She is simply expected to do everything for little pay and less respect. She is brushed aside by a female corporate superior whom she expects to be sympathetic to her situation; reflecting a feminist criticism of capitalism that one’s success is built on the exploitation of other women, particularly those of color. Once completely fed up with the misogyny, she snaps and goes full Michael Douglas in Falling Down mode.

Melody brings a healthy dose of skepticism to Ines’s long unquestioned status quo but with each macabre wrinkle, Ines is proved right time and time again. It’s not until the end when a ‘believe women’ lesson is shoe-horned into the plot that Melody’s influence makes an impact.

The bloody farce of it all is fun and engaging as it takes the recognizable caricatures that populate countless, drab cubicles and meeting rooms and creates the type of fizzy dramatic tension that hiding and disposing of dead bodies can induce. Everything outside of the deadly entanglements acts as a speed bump to the story’s momentum, including a hidden money subplot that ironically doesn’t pay off. With the authorities popping in to add suspense, the compounding frenzy barrels forward until it wraps itself up in somewhat of a disheveled bow. This is an example of a solid movie that has a few too many things going on that don’t coalesce to become greater than the sum of its parts. Despite its shortcomings, Employee of the Month is a pretty enjoyable effort.