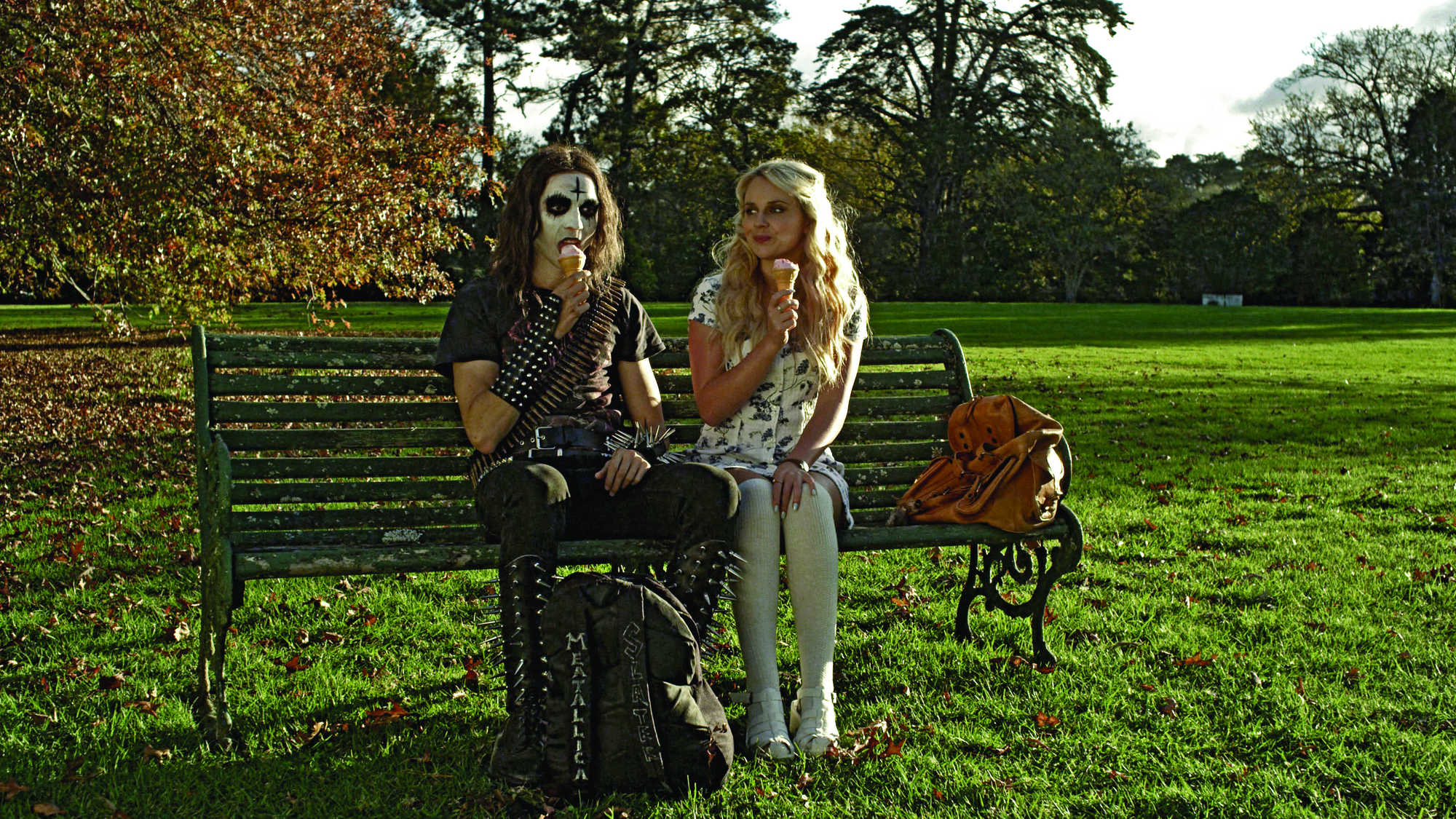 New Zealand hasn’t produced many horror films over the years, but those it has given birth to are remarkably strong entries. The late ’80s and early ’90s witnessed the rise of Kiwi director Peter Jackson who made a name for himself with the Bad Taste (1988) and Dead Alive(1992). Jackson helped shine a spotlight on the countries genre offerings and his success no doubt opened the door for a new generation of Kiwi genre filmmakers. The latest of these films to make its way Stateside is Jason Lei Howden’s outrageous debut feature Deathgasm about a group of suburban metal heads who summon a demonic force.

Milo Cawthorne and James Blake play Brodie and Zakk, two renegade outcasts who quickly bond over their mutual admiration of heavy metal and decide to form a band. But their dreams of becoming famous are quickly put on hold when the metal thrashing pariahs unintentionally discover ancient music sheets that contain some type of black magic. There’s a good deal of affection for Peter Jackson to be found in Deathgasm – a ridiculously fun and bombastic horror/comedy named after the thrashing four-piece garage band that awakens Hell’s stooges. Such is the premise of Deathgasm which takes inspiration from the dangerous cultural hysteria, now known as the “Satanic Panic,” a time period roughly covering the 1980s when many people became growingly concerned about Satanic conspiracies spreading throughout the United States – particularly fearful that Satanists were targeting children both physically and psychologically, and were attempting to recruit people through a variety of manipulative means. This included the widespread belief that various music (primarily Heavy Metal) would reveal Satanic messages and that role-playing games, particularly Dungeons & Dragons was a potential source of recruitment. Much like the films it affectionately nods to, Deathgasm takes place in the 1980’s when society viewed anyone associated with the genre of music as outcasts of a likely deranged, intoxicated, criminal and Satanic nature. Howden’s script joyfully pokes fun at these ludicrous allegations and spins them upside around to actually come true. 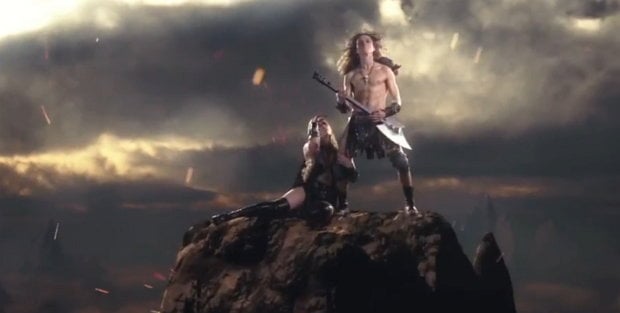 But what makes Deathgasm so special is that between the bodily goo rivers of blood, dripping limbs, plucked out eyeballs and over-the-top carnage – is a story full of heart. Metal music is not only an escape from the harsh realities of high-school bullies, parental neglect, and social discrimination but Brody uses it as a device to help him form a bond with others just like him (the Brotherhood of Steel he calls it). We can all relate to making a friend through a mutual love of the arts and Brody and Zakk are no different – they’re like Bill and Ted only armed with sex toys and chainsaws. 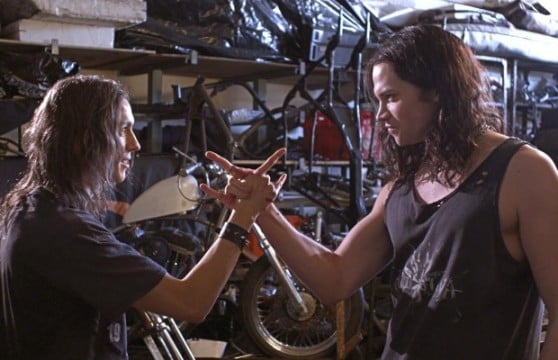 There’s plenty of vivid splatstick here, from dismemberment, disemboweling, beheading, and the like. 90 minutes viewing bodies ripped apart by power tools might not appeal to most viewers but those who like hyperbolic gore will appreciate how it is handled with bloody conviction. Once the film kicks in, with a frantic opening credits montage that’s comprised of hilarious animation and miscellaneous black and white sketches, it rarely slows down. Paired with some truly inventive effects (especially considering the budget), Deathgasm combines heavy metal and splatsitck into a rocking-good-time. Deathgasm is an escalating series of nauseating set pieces and somehow manages to be funnier with each disgusting new sight gag and Howden has a knack for shifting gears with unpredictable abandon between extreme gore and outrageous humor that calls to mind Sam Raimi’s best work. Warning: Deathgasm is guaranteed to test your intestinal fortitude. 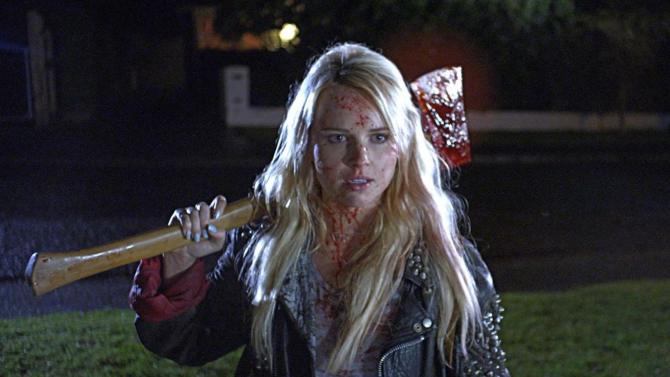 Deathgasm features breakout performances from both Milo Cawthorne and James Blake but Kimberley Crossman is the scene stealer here, playing the adorable girl-next-door Medina who ends the pic charging into battle with a bloody axe and a determination that makes you think she’s just finished reading Carol J. Clover’s Men, Women, and Chainsaws. Cawthorne brings tons of infectious energy to the project and despite the virtually non-stop barrage of raunchy language and unapologetic potty humor she and the filmmakers find time for some truly sweet moments. You’ll immediately take a liking for her character when she shares ice-cream with Brodie who describes the ever-expanding sub-genres of metal – but you’ll fall in love with Medina when she listens to metal for the first time and imagines herself transported to a towering mountain top where she’s decked out in Norse Goddess garbs.

Witty, energetic and appropriately self-mocking, Deathgasm keeps us interested because the writer/director and actors make us care about Brodie and his friends. Yes, the movie is filled with extreme gore, violence, action, nudity, sexual content and so on, but it’s biggest asset is Milo Cawthorne, who imbues the slightly naive Brodie with a good nature and bigger heart, providing the film with a central figure you want to see overcome every harsh obstacle.

Manhunter a Terrifying and Disturbing Examination of Voyeurism