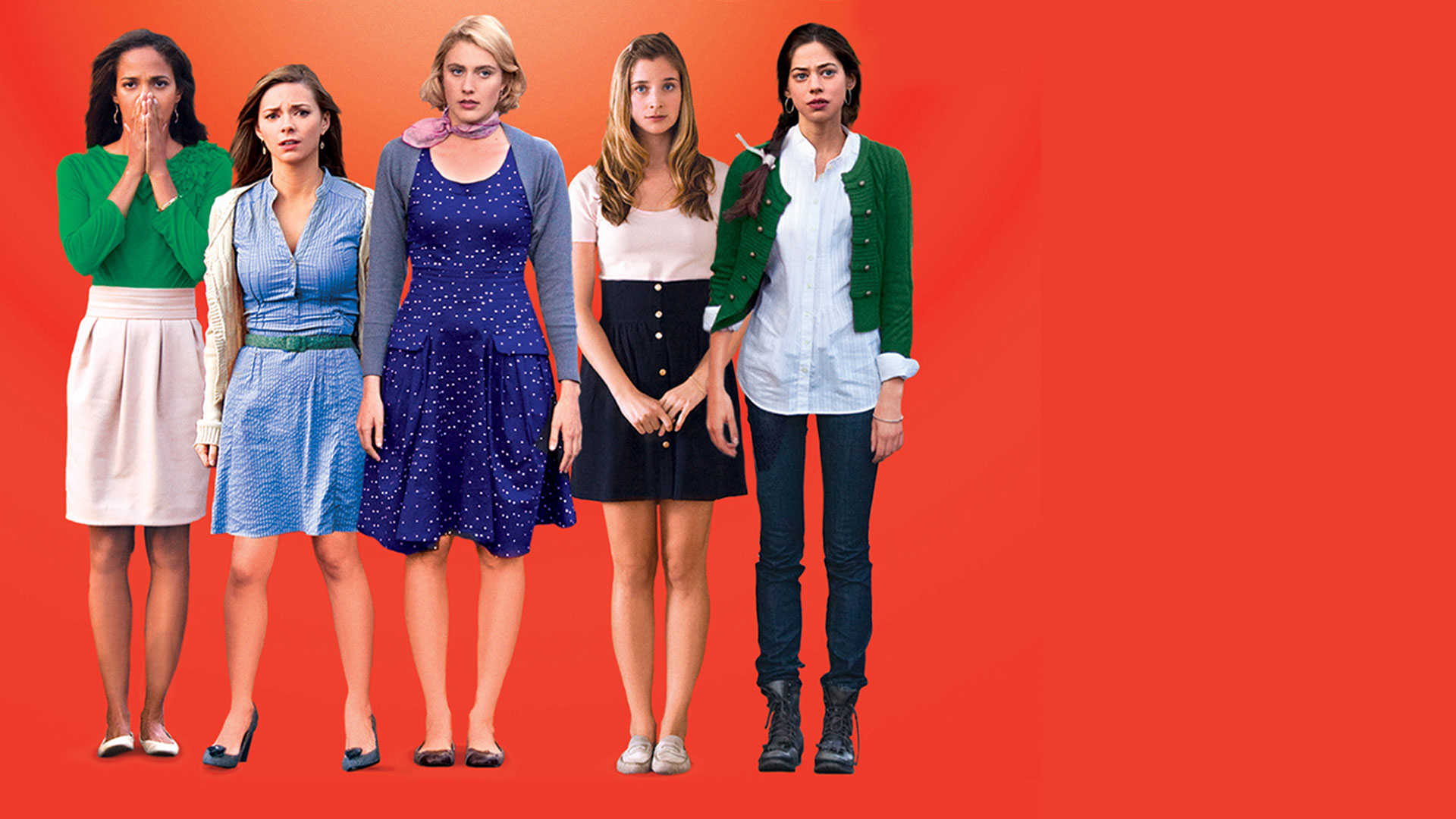 Oh, the hoards and hoards of films that try valiantly to dissect and study teenage and young adulthood, those formative years when boys and girls learn so much of themselves while at school. There are dramas, horror films, the not so cleverly coined ‘dramedies’, and so on and so on. Most of us have lived through those unforgettable experiences, whether we reminisce them fondly or otherwise being an entirely different matter. Because many understand what they mean, there is an endless supply of material, be it adapted or original, to create more of such movies to the delight or annoyance of many. College, or university as it is recognized in Canada, is unfortunately not solely the domain of the bright and brilliant. When making his feature-length comeback after 1998’s Last Days of the Disco, writer-director Whit Stillman takes that notion and creates a strange little comedy that does not, in fact, shine a positive light on the youth

Lily (Anelaigh Tipton) a transfer student, newly arrived at Seven Oaks college, a once girls-only school which has opened its doors to the other sex a few years ago. During an orientation session, she immediately becomes the focus of attention of Violet (Greta Gerwig), Rose (Megalyn Echikunwoke) and Heather (Carrie MacLemore), three preppy, perfectly dressed, very snobbish students who operate the suicide prevention centre on campus, without the slightest knowledge of what to really do in midst of a depressive student (tap dancing and coffee!). They target Lily and integrate her quickly into their group, showing her the ropes of how to handle boys, relationships and the like, although their philosophies differ vastly from what 99% of the students typically think. As an example, Violet, the self-appointed leader of the group, actually desires to go out with dumber, less physically attractive boys because, as she herself explains, she is doing them a service by making their day. Pedantic, hypocritical (and acknowledging it!) and slightly clueless as to how people really behave, how will the upcoming months develop with a newcomer in the group and plenty of boys (Adam Brody and Hugo Becker in particular) to annoy or attract them…or both.

It is somewhat ironic that in the span of only a few weeks two films were released in 2012 from directors who had not worked in some time but returned with stories about young adults or teenagers, the other being Mary Harron’s The Moth Diaries. Unlike Moth Diaries, whose aimlessness and inconsistencies hindered the overall picture given how it was felt that the director did, legitimately, want to head somewhere with the story, Damsels in Distress is the benefactor of wandering story which leads the audience into a hundred and one directions while ultimately never leading anywhere specific. Confusing? Read as such in a review, that is quite possible, but the experience is worth it, as Whit Stillman assembled a cast who understands what comic timing is all about, virtually regardless of the comedic styles exercised.

Those two points, lack of focus and comedy, cannot be emphasized enough, for anyone heading into Damsels in Distress with expectations of being served a quaint little story that guides the viewer from points A all the way to Z with reasonable simplicity is sure to find the film more than a little confounding. It is not that the story is overly complicated. Rather, it is a challenge to dissect just what exactly the story is. Plot is a vastly different aspect of any film, and Damsels is abundant in plot. In fact, there is no shortage of plot. Both Violet and Lily, who essentially function as the two main characters in the film, find themselves collectively attracted to 3 different boys at various moments, they try to start a dance craze, they attempt to prevent suicides, they debate love, they debate what makes somebody attractive, they debate what makes a boy insane, unworthy or just a doofus, etc. Following these girls around, as well their fellow buddies Heather and Rose, all of this somehow falls into place while simultaneously being all over the place. Damsels does not appear to be meant for telling anything relatively cohesive. It concerns itself with funny, strange characters whose worldview has been so perfectly boxed in and sheltered from what anybody else may believe (by ‘anybody’ it is meant ‘practically everybody’). The girls’ intentions may be pure, at least most of the time, what with suicide prevention being quite a noble cause and all, yet their methods fail them time and time again. Either that or said intentions lead them to discover something anew which sets them off course from whatever it was they were doing a few scenes ago. It feels very easy to blame Whit Stillman for being aimless, for not knowing exactly what he wants out of his film, to cry foul that the man has lost the proverbial ‘it’ after a 13-year absence. First and foremost, many of the situations are comical in of themselves, that being even aside from what the cast adds onto them. Secondly, the nature of the characters themselves, with their unorthodox attitudes on life, on sex and so many other subjects, helps support the script’s episodic tendencies. These girls, as well as some of the boys they meet, have so many little weird quirks, many of which are funny, that it becomes fun to see them jump from one scenario to the next. It is, as mentioned in the introductory paragraph, part of their learning experience.

The second element of importance, the comedy, is far sharper than the story’s general focus. Stillman spreads the laughs rather evenly amongst his cast members and between the sexes, with neither camp nor any specific character, claiming ownership over the film’s comedic tone. The singular character who is awarded the least amount of funny lines is Lily, which makes sense in a way. She is supposed to be the ‘outsider’ learning these strange ropes. Greta Gerwig, on the other hand, gives one of the more perplexing performances in recent memory. Is Violet supposed to be aloof all the while trying to be sharp in her own schizophrenic way? Or rather, has she convinced herself of being extremely sharp yet conveys a bizarre sense of aloofness visible in her face despite her best efforts? It is hard to tell. What matters is that such peculiarities make the character, well, not attractive, but definitely interesting and ripe for some solid lines, such as when comforting a fellow student she fears may be suicidal following a break up with her beaux. The girl in question, recalling her ex’s many qualities, refers to something along the lines of :

-‘…you know that gaze filled with love a boyfriend can give his girl?’

Violet sort of stares off, trying to recollect any such moment she herself experienced in her own life, only to calmly and dispassionately reply:

What makes most of the comedy work is that the actors take the lines with a degree of seriousness and sincerity. Silliness, if delivered in silly fashion, can feel too on the nose and self-conscious. In Damsels, a lot of what is said is terribly silly, but said in a very earnest fashion, making much of what happens and is said quite amusing. Laugh out loud, ‘slap on the knees’ funny it is not, but director Stillman keeps the comedy consistent at least, even though not much of it is necessarily uproarious. In an age when too many comedies offer two or three fantastic jokes among a sea of mediocrity, it does not hurt to have one that produces endless chuckling. At one remains sensibly entertained throughout the entire film. Speaking of comedy value and charm, why is Adam Brody not hired more often?

True enough, it would have been nice if, by the film’s end, the girls and boys had actually learned something. As it stands, when the closing credits begin to roll, there is little to hint they will not be in an entirely different and equally silly situation within a few days. Be that as it may, Damsels in Distress proved a fine return for Whit Stillman and gives the spotlight to several relative unknowns who showcase some of their comedic chops.