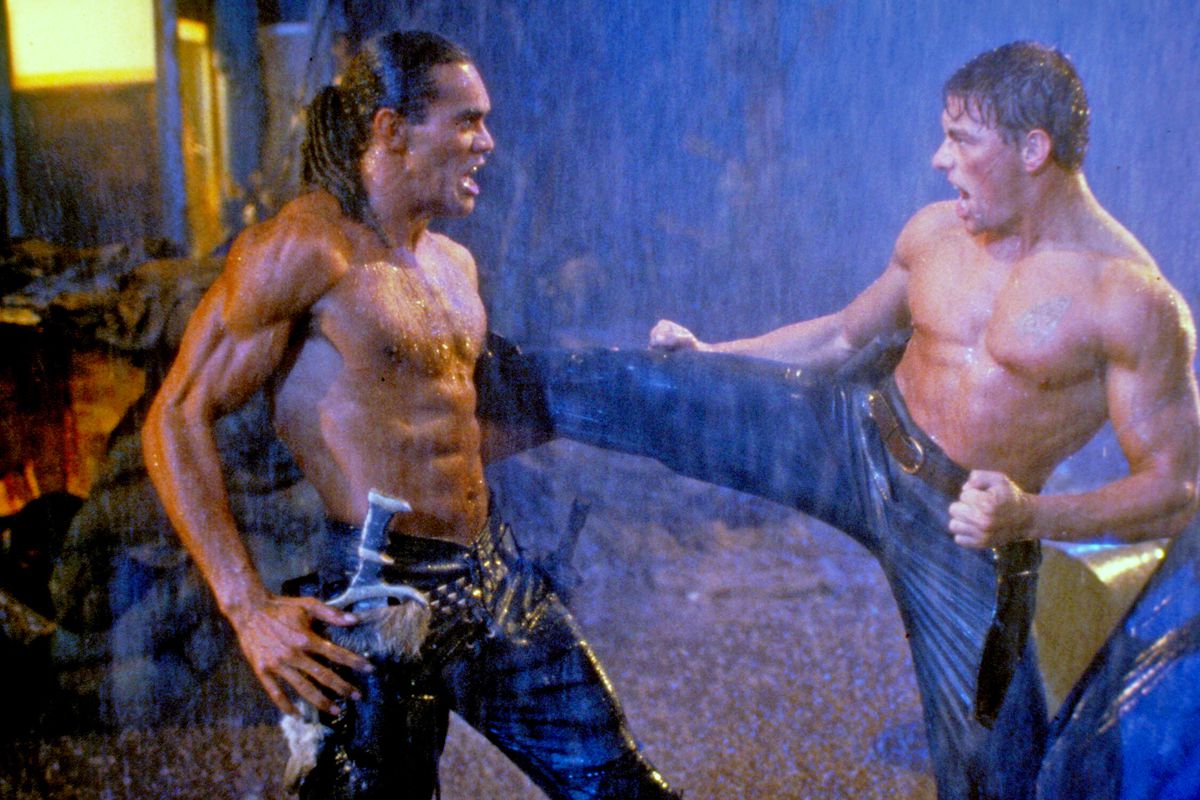 He’s the First Hero of the 21st Century…And He’s Our Only Hope.

In the future, a dangerous plague wipes out much of humanity, civilization crumbling away with it. Enter the pirates, gangs that reap barbaric pleasure out of rape and pillage. One such faction is led by the Goliath-like figure of Fender (Vincent Klyn), a psychotic individual seeking to intercept a female cyborg, Pearl (Dayle Haddon), traversing the United States to Atlanta and carrying the secret medicinal knowledge that will help the country’s few remaining doctors determine a cure to the deadly virus. Dayle cannot make the journey alone, requiring the help of tracker Gibson (Jean-Claude Van Damme) a man wrestling with his own demons and wanting to settle a score with the nefarious Fender.

Right from the opening minutes, it is abundantly clear that the filmmakers wish to ape the general tone and aesthetic of the Mad Max franchise that erupted on screens for the first time only a decade prior and into the 1980s. From the dystopian world reduced to savagery for vaguely explained reasons, to the quasi-steampunk allure of the costumes and technology employed (what little is left, of course), to the overall personality of the universe. Cyborg is not a lightweight film tonally, embracing a very dark mood in its visualization of a world where all hope seems lost and the heroes have very little reason to smile. It is also apparent that director Albert Pyun and his crew are operating with a limited budget, as most of the sets are rather small in scale, encouraging the filmmakers to make the most of what they have, much like the characters in the film and the creators of the aforementioned Mad Max films.

Smaller budgets do sometimes bring out the best in some creative minds, Cyborg being a surprisingly effective if incredibly simple, version of the post-apocalyptic world viewers have seen on film and on television time and time again. It is not difficult to discern how small some of the sets really are and where the crew is trying to hide the limitations of their means, but ultimately the world-building, certainly from a visual standpoint, is one of the more charming elements Cyborg has to sell itself on. Adding to the pleasantly cheesy tone is the film’s score, courtesy of, Kevin Bassinson and, believe it or not, Lalo Schifrin, most famous for working on the Mission: Impossible theme, Bullitt and several Dirty Harry soundtracks. The best way to describe its sound would be to argue its similarity to the electronic, synthesizer-heavy scores that accompanied many personal computer games of the late 1980s and early 1990s before computer sound cards could manage more sophisticated audio tracks.

By 1989 Jean-Claude Van Damme had yet to attain worldwide star-status that would come just a few years later. His most notable role up until then had been in Bloodsport, not a film that taxed his limited acting skills, to say the least. Things did not get much better in Cyborg, in which the Muscles from Brussels struggles to show much character or emotion other than melancholy. Of course, melancholy can be communicated via blankly starring off in the distance, something Van Damme certainly accomplishes with aplomb. One is forgiven for thinking he is playing the titular machine. Nay, the star is mostly served by all the action stunts required of him, many of which are solid if unspectacular. Offering North American audiences an action movie in which the hero is supposed to be a martial arts expert is a tricky proposition. For whatever reason, many filmmakers seem unsure how to capture the rhythms and powerful grace of the martial arts, therefore preferring to showcase them with as slow a pace as possible, which is essentially what viewers get here. Van Damme can definitely raise his legs mighty high and is evidently a physical beast to contend with, but it would be foolish to expect Cyborg to provide the best the man has to offer. The action is serviceable, just not top tier, although that is to be expected in a B-movie.

Cyborg is as Well an Oiled Machine as Cheap, B-Movies Get

If there is a cast member that steals the show, it has to be Vincent Klyn as Fender. Truth be told, his acting abilities do not appear to reach far beyond what his Belgian co-star can muster, yet his presence alone imbues his scenes with a genuine sense of menace. Even though his minimal dialogue is rote and delivered as though he had learned to read minutes before arriving on set, sometimes the physicality a big scary man is all a movie needs to give itself a bit of a lift.

Cyborg is lower-tier Van Dame, mostly due to its tiny budget and the fact that this stage is still very early in his career. He lacks the experience to carry a movie. That said, there are some undeniably compelling aspects to enjoy, mostly derived from what director Pyun and his team can extract out of what little they’re working with. In essence, it is the best possible movie one is ever going to get under the circumstances, and that really is not half bad.

‘Mad Max’ is the Beginning of the End of the World

‘Zhong Kui: Snow Girl And The Dark Crystal’ Attempts to Rival the Best that Hollywood has to Offer