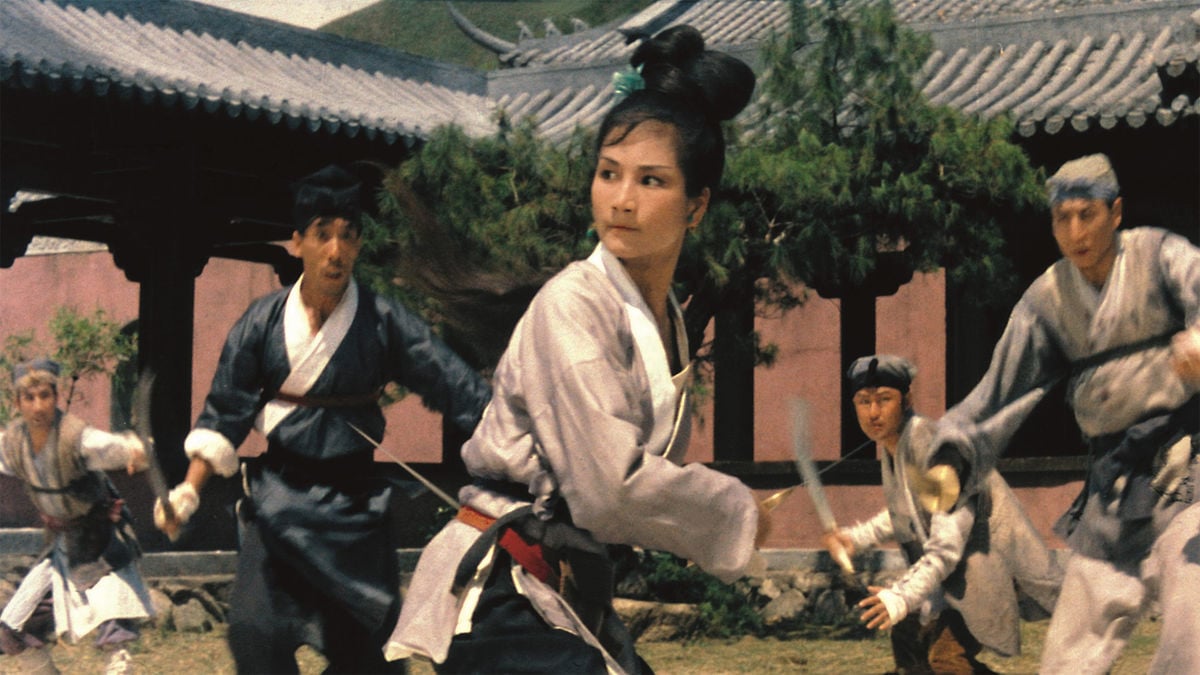 There is always something thrilling and fascinating about a movie that defies one’s expectations, giving audiences something they never saw coming. Given that Come Drink With Me is the first film I watched before starting this series of articles, few expectations existed beforehand. Nevertheless, King Hu’s efforts in putting interesting twists on specific characters and narrative elements do not go unnoticed, and while the film does experience some slight turbulence, the end result makes for a memorable 90 minutes.

Set in an unspecified past, a party of men transporting a general’s son across the mountainous countryside is cleverly ambushed by a hoard of gangsters, whose intentions are to offer the son back in exchange for their currently imprisoned leader. It is only a matter of time before the general’s daughter and cunning warrior, code name Golden Swallow (Chang Pei-pei) is given the mandate to find her brother and return him safely. As the saying goes, one does not negotiate with terrorists. With vile creatures such as Smiling Tiger (Li Yun-Chung) and Sleek Face (Chang Hung Lit) acting as interim chief, Golden Swallow has her work cut out for her. Thankfully she is assisted by the eccentric Drunk Cat (Hua Yueh), a man who enjoys spending his time guiding a chorus of young children more than actually fighting, but his martial arts talents are greater than Golden Swallow or any of her closest enemies imagine…

Come Drink With Me is a film that clearly has ambition, playing the game by its own rules, with characters that are at times weird yet very much at home in a world filled with code-named warriors, martial arts masters masquerading as poor drunks and bandits who give themselves names the likes of Smiling Tiger and Sleek Face. Almost everybody the viewer encounters is fun to watch act out their role in the story as the movie zips along. King Hu, one of the more highly regarded directors to have worked within the Shaw Brothers studio system, weaves a tale in which appearances are continuously deceiving the audience. First and foremost, there is Golden Swallow, whom at first the audience does not know is a woman. There is an early scene after the general’s son is kidnapped when the hoodlums weigh their options regarding a prisoner exchange. It appears as if the gangsters themselves are unaware of Swallow’s real sex, so the surprise catches both them and the audience off guard when the revelation occurs. Better still, the film sticks to its guns in making its leading female character important and cool all the way through. Smiling Tiger and Sleek Face are presented similarly. The former masks his ill intentions and soul with kind, warm looks while conversing with the enemy. The latter, with his chalk-white face and soft mannerisms, comes across as quite gentle, oddly resembling a Chinese version of the Joker. Both, however, are cold-blooded killers, neither hesitating to dispatch a foe. The full force of Drunk Cat’s powers is not revealed until very late in the film when, just in case the movie was lacking in surprises, his elder brother (and member of the same league of warriors as Cat) makes an appearance and demonstrates his own supernatural skills. Keeping things fresh with a host of characters who earn their place thanks to oddball contradictions is a large reason why Hu’s film is so successful.

Come Drink With Me Proves Golden

The chemistry between cast members keeps everything solid throughout, in particular with Cheng Pei-pei and Yueh Hua. Each puts their own stamp on their roles, with Golden Swallow being the straight-woman next to Drunk Cat’s more fun-loving nature. Simply put, make a very fun team, despite that the early goings are less than harmonious. Seeing the manner in which their partnership develops, it was striking to notice how their story arc was similar to the ones found in the ever-popular genre of ‘buddy cop’ flicks, wherein early antagonisms melt away as the story evolves. Come Drink With Me does not follow that pattern exactly for Drunk Cat does willingly assist Golden Swallow in some subtle ways early on, but the other half of the equation fits since Swallow cannot stand her male counterpart’s childish antics. Once he reveals exactly who he is, all can be forgiven and the two work like the most dynamic of duos.

Hu and the screenwriters may not be all that keen on spending too much time on plot, preferring to keep things effective in their simplicity most of the way through, the one hiccup being the inclusion of Drunk Cat’s brother so late in the narrative, which unfortunately takes some focus away from Golden Swallow. When it comes to action, however, the filmmakers ramp it, with frequent fights stunts that dazzle. Some are smaller in scale, while others are sprawling and last a long time, such as the knife and sword fight opposing Swallow and Sleek Face, as well as dozens of his goons, in and around a temple. The fight choreography is sharp and the actors move in a dangerous ballet of grace and power. The level of violence depicted might surprise a few: gushes of blood as swords are plunged into men’s chests, spears piercing chests, darts launched into eyeballs, the filmmakers are unafraid of showing some nasty deaths. Gratuitous? Maybe, although it does serve to build a real sense of danger.

Come Drink With Me comes strongly recommended for anyone wishing to discover some Shaw Brothers movies for the first time. A great female lead and fun sidekick, memorable villains, and some awesome action are just about everything a martial arts movie fan asks for.

‘True History of the Kelly Gang’ Examines a Criminal’s Upbringing

There will Never be Another Film like ‘Roar’ a.k.a. the Most Dangerous Movie Ever Made