Most films centered around middle schoolers overemphasize their youthful eccentricity while under-emphasizing their social ineptitude. When adults make movies about formative years, the temptation of collective nostalgia is difficult to resist — after all, who doesn’t like a wistful recollection of their youth every now and then? But an entire film made through a rose-colored lens is (more often than not) detached from the awkward and emotionally turbulent experience that is the reality of growing up. It doesn’t take a genius to know that there’s a visible disconnect between how we like to remember middle school and how it actually was.

Bo Burnham’s first feature film cleverly highlights that disconnect by telling a tale heavily rooted in the reality of today’s middle schoolers; complete with the ubiquity

of social media, clumsy hallway conversation, and the occasional awkward encounter with sexuality. But Eighth Grade is such a refreshingly genuine coming-of-age tale that all of the characters’ offbeat behaviors seem entirely in place, making the film as a whole a pleasure to watch — secondhand cringe and all.

The protagonist, Kayla (portrayed by fifteen-year-old Elsie Fisher), and her final week of eighth grade serve as the centerpiece of the film. Set in Westchester County, New York, much of the movie depicts her struggle to navigate the stormy social strata of grade school. An only child, Kayla lives with her single father, Mark (Josh Hamilton), who notices her difficulty making friends, and often encourages her to be more social, despite her protests. The sources of tension — i.e., bumbling attempts at romance and clashes with the archetypal “popular girl” — are rather ordinary in nature, but the depth of character and witty dialogue makes them glow anew.

Counterintuitively, the film’s ideal audience is young adults (as opposed to actual eighth graders); despite its clear focus on middle schoolers of the modern era, its language and references of sexuality earned Eighth Grade an R rating from the MPAA. One could take a teenager to see the film without giving them serious lasting trauma, of course, but part of what makes Eighth Grade such as must-see is its unwavering honesty in retrospection — making it best enjoyed by people who have already been through it all. 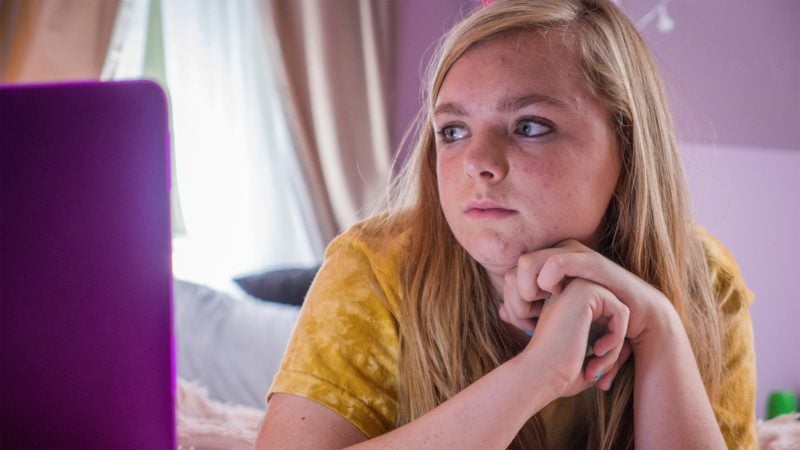 Another admirable facet is how the characters engage with technology. It’s rare to get such a poignant depiction of the ways in which people — especially young people —  use technology that doesn’t seem like it came from a heavy-handed Luddite. Kayla’s YouTube channel, in which she gives personal advice from her DIY studio at home (in true Millennial™ narrative fashion), gives the viewer a peek into her character — her ambitions, struggles with social anxiety, and eventual evolution of her sense of self.

Many critics and consumers alike use the concept of viral videos — the idea of some average Joe capturing something wild and rapidly achieving internet fame — as a plot device without depicting any consequence past the usual complications of fame. In reality, the majority of YouTube videos never approach viral status, but that silent majority is where the real average Joes can be found. At a film screening of Eighth Grade at the University of Chicago, director Bo Burnham explained that viewing unpopular videos (often by children or teenagers) proved invaluable to the creative process.  He also stated during the Q&A that there was a visible difference in subject matter between the boys’ and girls’ videos, noting that “the guys talked about Minecraft, where the girls talked about their souls.” But in the end, both sentiments are equally important to the middle school experience.

This is the underlying beauty behind Eighth Grade, as its down-to-earth plot trajectory proves relatable rather than lackluster. The film serves as a reminder of the beauty of the mundane — the pleasure and perspective we find by peering into the daily life of someone who is still figuring it all out.

Even with its unabashed celebration of the familiar and everyday, the film itself is a fresh and novel take on the classic coming-of-age story. Those wanting a reminiscent movie through a rose-colored lens should look elsewhere, but for those seeking a slice-of-life picture that hits a little closer to home, Eighth Grade is an absolute must-see.