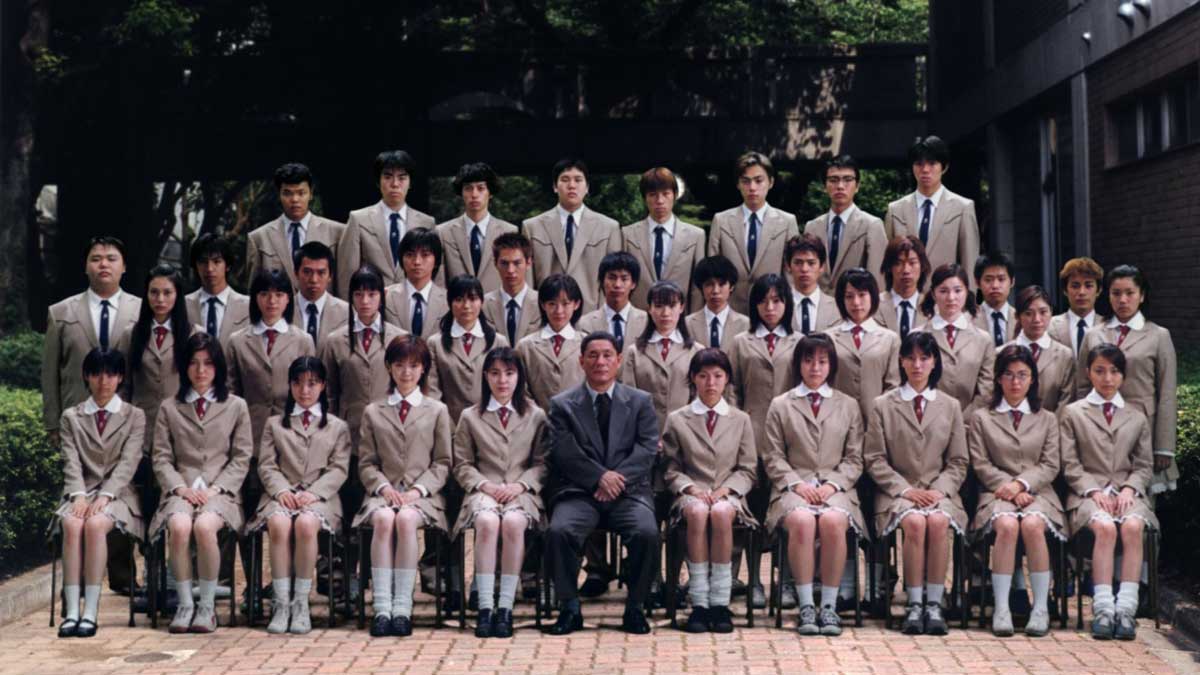 Battle Royale is Brutal and Totally Deserving of its Legendary Status

A pre-title scroll, set to a classical thundering score, quickly establishes what seems to be a dystopian alternate-universe-Japan. The nation collapsed leaving 15 percent unemployed and 800,000 students boycotting school. The government passed something called the Millennium Educational Reform Act, which apparently provides for a class of ninth-graders to be chosen each year and pitted against one another on a remote island for three days. Each student is given a bag with a randomly selected weapon and a few rations of food and water and sent off to kill each other in a no-holds-barred game to the death. With 48 contestants, only one will go home alive.

Battle Royale is first and foremost, a sick and twisted heart-stopping action film. The film aroused international controversy and was either banned or excluded from distribution in many countries, yet it became a domestic blockbuster and is one of the 10-highest grossing films in Japan. It received near-universal acclaim and gained further notoriety when Quentin Tarantino was quoted as saying he wished he had directed the movie himself. Their Game, No Rules, No Prisoners

Battle Royale is part exploitation, part teen angst drama, part black comedy and part survival thriller. This is about as bleak and cruel as they come, yet it remains endlessly entertaining, all at the same time. Kinji Fukasaku’s direction doesn’t get any points for subtlety but like all great films, Battle Royale has something to say. This is a harsh critique and a darkly funny satire of a wide array of elements of modern Japanese society. Think of it as a cross between reality TV with Lord of the Flies. The targets of satire vary: There is the unsettling social commentary on our tolerance to violence and self-preservation at any cost – Japan’s obsession with authority and obedience, and how adults place far too much pressure on their children’s educational achievements –  and finally the obsession with violent video games and anime. Put aside the social commentary and even the deliberately provocative violent teen-hunts, and Battle Royale is downright cartoonish, hilarious, and exciting, as Fukasaku maintains the right tone, never slipping into seriousness or preachiness.

The director was nearly seventy when he made this groundbreaking film, and sadly it turned out to be his last. Kinji Fukasaku died of prostate cancer shortly after starting work on the sequel, shooting only one scene with Takeshi Kitano. His son, Kenta Fukasaku, went on to complete the film in 2003 and dedicated it to his father.

Battle Royale, of course, is not a perfect film; there are definite plot holes. If the event is supposed to be televised, how come none of the kids have ever heard of it, for instance? The film also falters in failing to establish an emotional connection with any of the young characters, since it is hard to keep track of all 42 students. Fortunately, the numbers quickly wind down and an onscreen scorecard pops up from time to time, helping you keep track of how many are alive and dead.

Special mention must be made of Takeshi Kitano (a.k.a. “Beat” Takeshi) who stars as the kids’ former teacher and who also acts as a sort of master-of-ceremonies. His performance is fantastic, bringing some needed humor to the violent proceedings. He also just so happens to have one of the greatest death scenes ever put to film. 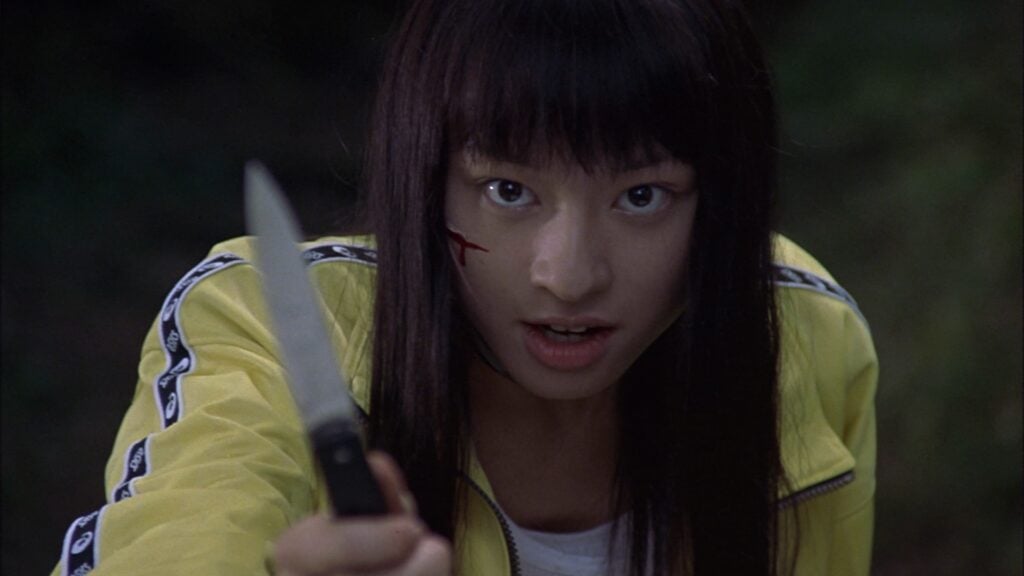 And finally, Battle Royale has the privilege of bragging about having one of the greatest movie soundtracks of all time. Composed, arranged and conducted by Masamichi Amano, and performed by the Warsaw Philharmonic Orchestra, the score/soundtrack features pieces of classical music with some original composition, every track perfectly elevating the tension in all the right places.

There have been many films, TV series, manga and books similar to Battle Royale since its release— from Hunger Games to Squid Game and everything in between. Whether or not the creators of these works borrowed heavily from Fukasaku’s near masterpiece or the novel by Koushun Takami (of which Battle Royale is based on), is ultimately unknown. In the end, it really doesn’t matter. Great art has always imitated great art, but what matters is Battle Royale is still the best of the bunch.

Fukasaku released a “Director’s Cut” which framed the story around a basketball game in hopes of helping to flesh out the characters and make them more distinguished. In addition to the 8-minutes of new footage, several additional bits of computer-generated graphic violence were added, because why the hell not. This version can be found on a three-disk Blu-Ray, released in 2012.