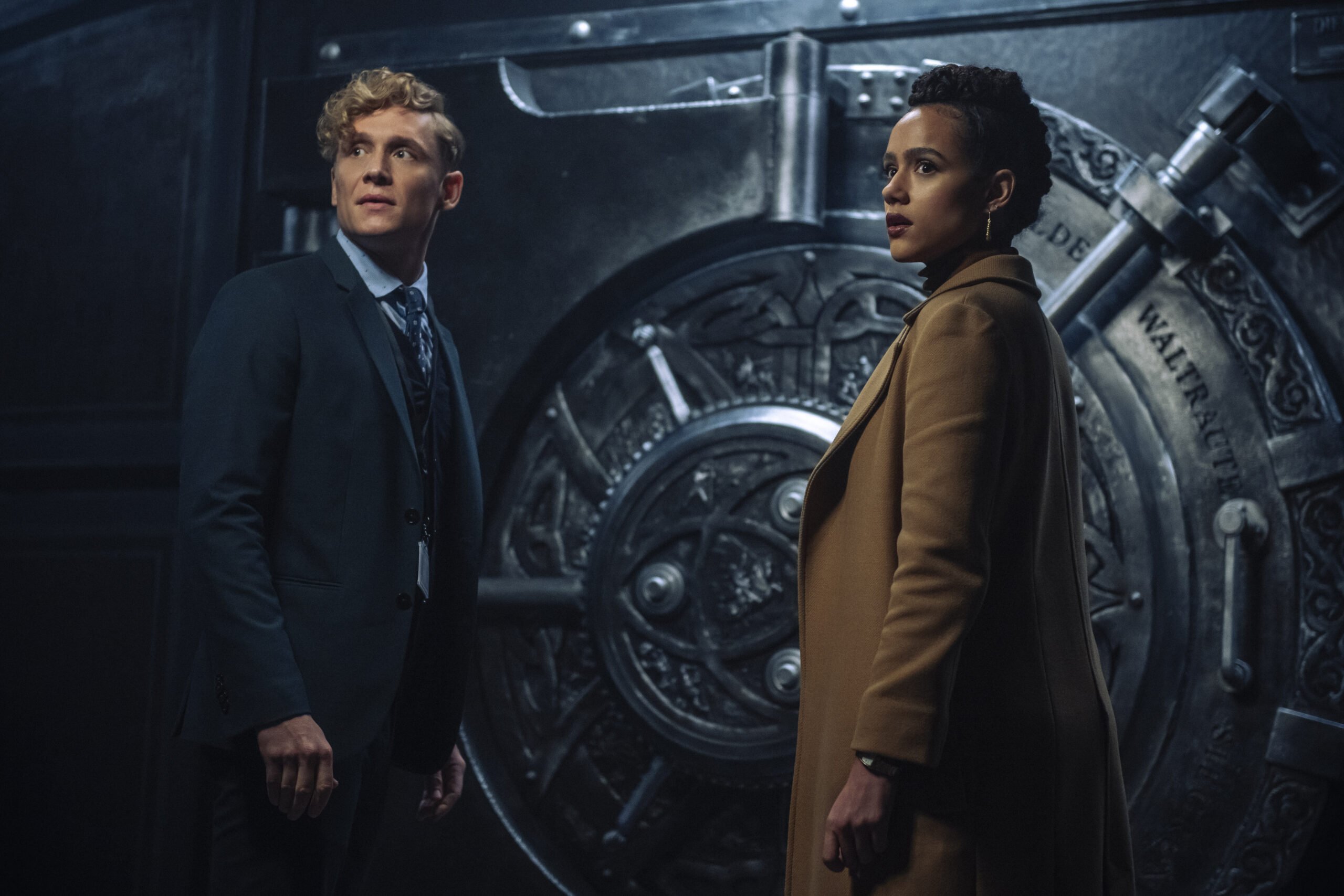 Shifting gears from the undead to heists, Matthias Schweighöfer takes the reins from Zack Snyder’s Army of the Dead to put focus on his own character from the zombie film that released earlier this year. Even with the focus placed on the best character from Snyder’s film, Army of Thieves lacks any unique qualities that sets it apart from any other heist film. Visually bland, narratively rote, and lacking any emotional core, Schweighöfer directs and stars in a prequel that feels like content churned out to quickly establish a new franchise.

Army of the Dead had a couple things going for it: some genuinely good zombie moments combined with a hierarchy of zombies and a single location. Its ragtag group of mercenaries and misfits didn’t mesh perfectly together, but most of them had their own unique charms that fit within the zombie movie mold while still being more than capable of pulling off an elaborate heist. It also had Ludwig Dieter (Schweighöfer) – a master safecracker confident in his skills and humorous in demeanor. With every other character being overly serious, Dieter was the levity the film needed.

Now in Army of Thieves, Dieter remains essential to another group of criminals, but he has shifted from comedic relief to the major focus for any comedy and emotion. Set before the events of Army of the Dead just as the zombie outbreak is starting to ravage America, Dieter finds himself hired by a group of criminals to break into three of the remaining four legendary safes built by Hans Wagner and spread across Europe.

The biggest problem in Army of Thieves is that Dieter isn’t fleshed out enough to lead an entire film – especially not one that is 127-minutes long. The screenplay from Shay Hatten doesn’t seem aware that most of the emotional resonance is in Nathalie Emmanuel’s character, Gwendoline Starr. Able to hold her own in every action beat, brimming with charisma, and having an actual backstory that the film wants to explore, she’s essentially sidelined as a romantic interest to Dieter. Which is an odd decision unless there’s some intention to spin off from this prequel to follow her character in a separate film.

The big problem is that Dieter’s skills aren’t exciting enough and every moment he’s not cracking a safe is when he’s asking a hundred questions to try to stay out of the dark on the group’s plans. Each subsequent job has an increasingly difficult safe to crack but the film has to create an elaborate set piece around each safe in order to actually make things interesting. The group of thieves, led by Brad Cage (Stuart Martin playing a character obsessed with Nicolas Cage’s action films of the 90s) and aided by hacker Korina (Ruby O. Fee) and getaway driver Rolph (Guz Khan), all have their little charms but ultimately feel incomparable to Dieter’s importance to the plan. They don’t get any money if Dieter can’t crack the safe.

The one bright spot in Army of Thieves is that when a safe is being cracked it does feel somewhat operatic. It helps that Dieter plays classical music while cracking the safes, but even visually the film shows the inner workings of the safe as he’s working his magic on them. There’s also a failsafe built into each device that will destroy the contents if the incorrect combination is input twice, so tension builds at a steady clip as he turns each dial slowly. These moments are given just enough time and focus that they feel crucial, unlike every other element of the plan. They don’t even care about taking all the money, they just want some.

Placing so much weight on a character that was originally comedic relief seems futile, but the problem with Army of Thieves actually resides in its inability to do more than subtle character development from Schweighöfer’s performance. He breathes life into an otherwise generic character: the awkward recluse who is far more capable than he appears.

Hatten’s screenplay just seems quickly created so Netflix could put the wheels in motion for an Army of the Dead franchise that will always have Zack Snyder’s name pinned as a producer. So far, Army of the Dead’s mild entertainment and Army of Thieves’ bland execution and misguided focus offer very little hope for anything else good to come from this franchise. While it’s admirable that Army of Thieves has almost no zombies in it besides mentions of the outbreak in Vegas, it’s clear that the franchise can’t sustain itself without the added tension of horror. Instead, it replaces zombies with government agents hunting the group down but they’re too inept to actually provide any threat. Army of Thieves always feels like it’s scraping the bottom of the barrel for anything that could be remotely entertaining and almost always comes up short.

The Many Saints of Newark: An Origin Story That Enriches The Epic Saga of The Sopranos

Last Night in Soho Devolves into a Boilerplate Murder Mystery