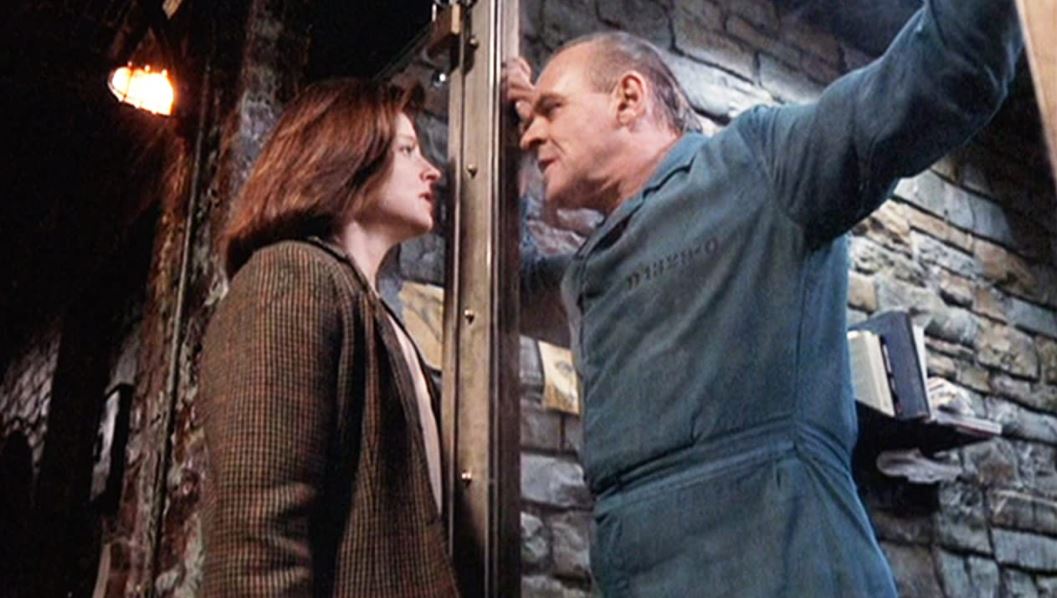 (The following contains a great deal of spoilers)

Rewatching The Silence of the Lambs, Anthony Hopkins is as mesmerizing as ever in his masterful portrayal of psychiatrist and cannibal Dr. Hannibal Lecter. The intellectual serial killer who is emblazoned as one of the most memorable madmen in cinematic history is still held in high esteem for many good reasons. He’s a sly, calculating fiend who patiently awaits exactly the right moment to pounce on people’s weaknesses and annihilate their sense of self on all levels. He twists minds and devours bodies with a sophisticated flair. Less exalted within remembrances of the film is Jodie Foster’s FBI agent-in-training, Clarice Starling, who must elicit information on a serial killer from Lecter in a race against time. Most of the well-known excerpts from the film show Starling pushed to tears as she recalls a childhood memory of lambs being slaughtered or fearfully listening as Lecter tells how he consumed a census taker with some “fava beans and a nice Chianti,” but these iconic and often quoted moments detract from the overall picture of the story, which actually conveys her as being far from just another subject of Lecter’s terror. Starling is able to withstand the menace of Lecter with dignity. The reciprocity of their interactions emerges from Lecter’s interest in her working-class background and her acute ability to assess and engage him on a higher plane of thought beyond the straightforward profiling that she’s supposed to be seeking from him. He gives her leads as to how to solve a crime, but her will to succeed is planted long before she knows him and persists after he disappears. Her strength as a protagonist emanates from-hard won intellect and a will to challenge monstrosity.

Like other American women from the same era of film (Sarah Connor’s intimidating physique in Terminator 2: Judgement Day, Sigourney Weaver’s don’t-mess-with-me athletic prowess in the Alien sequels), Starling is fit out of preparedness. She has sculpted herself for survival and to minimize vulnerability in a vicious world. She is not active for presentational purposes and is not a character that was created to pander to a specific demographic of moviegoers. We look at her, and she is frequently stared down by other characters, but we aren’t made to objectify. We witness men’s lascivious side-glances and wary looks regarding her presence, yet she is tactical and relentless. When we first see Starling, she’s on her own, running, jumping, and climbing over an obstacle course in the woods of the FBI Headquarters in Quantico, Virginia. She exists in a hyper-masculine environment, a woman who is constantly eyed as other. As Lecter knowingly quips to Clarice during one of their visits: “Don’t you feel eyes moving over your body? Don’t your eyes seek out what they want?” Clarice indeed lives within suffocating patriarchy. That she is working within the existing power structure to carve out something for herself shouldn’t be denigrated. Her only way to gain power is to ascend through the ranks of men by being the best at everything. She must maintain a professionally cool demeanor but the film also admirably allows her to be emotional privately and in the presence of Lecter. Even though this renders her vulnerable, the narrative doesn’t shame her for it.

Foster had tough, heavy parts long before The Silence of the Lambs. As a young woman, she was ever shocking in The Little Girl Who Lives Down the Lane. She plays Rynn, a strong and brainy orphan who takes on pedophilia and power-hungry adults with skillful precision. Additionally, she played a teenaged hooker in Taxi Driver and a rape survivor under intense scrutiny in The Accused. For The Accused and Lambs, Foster won Academy Awards for Best Actress. Foster’s straightforward yet bruised demeanor matched with the simmering danger behind Hopkins’ slick deliveries make Lambs an engrossing watch to this day. It’s the only horror movie to win the Academy Award for Best Picture (Rosemary’s Baby didn’t receive a nomination and The Exorcist, although nominated lost). Lambs also had the distinction of garnering Academy Awards in 1992 for director Jonathan Demme, Hopkins and Ted Tally’s screenplay. Perhaps why it rose to be such a pop phenomenon can be explained in part by the richness of Thomas Harris’s source novel, which created a seismic battle of mental acumen. Lecter longs to match wits, and Starling appeals to him as a foil to be tested and drawn out of her deep emotional well. He tries any number of tactics to unnerve her by using vulgarities and unearthing traumatic memories, but what happens between Lecter and Starling is an exchange of respect and power. Clarice stands up to Lecter’s emotional ridicule, and in turn he has a reverence for her that protects her from his physical cruelty and bestows the keys that help her break into the upper echelons of the FBI that also hold him prisoner.

One can’t at all call The Silence of the Lambs sincerely progressive in terms of its treatment of minorities, even though it affords Starling growth and intelligence without exploiting her visually. Much has been discussed about the obviously problematic portrayal of the serial killer that the FBI is hunting that cause them to send Clarice after Lecter’s analytical skills in desperation. Buffalo Bill is a transgender person who labors to construct a suit out of plus-sized women’s skin because he was repeatedly denied gender reassignment surgery. The movie corrects itself a bit by stating that transexuals are usually passive (any blanket statements about groups of people also being insulting and prejudiced aside), but an abusive childhood later led to violent mental illness. So, while the movie does not say that transsexuals are inherently sick, the visualization of his femininity is meant to disgust, not because he slices women up, but because part of his trans identity is meant to repulse. Today what is frightening about the character of Buffalo Bill isn’t that he tucks his manhood away while dancing and wearing lipstick, but that he snarls at an abducted woman to put lotion over the skin he intends to take from her as he refers to her as “it.” This distancing behavior coupled with mimicking her cries back to her remain horrifying and make Buffalo Bill still resonate as a villain.

Women feature prominently in the storyline, from Clarice as the primary savior to Catherine (Brooke Smith) as Buffalo Bill’s captive. Lecter guides, but it’s Clarice’s intelligence that leads her to Buffalo Bill. Catherine at first cowers but then gains leverage and time by capturing Bill’s dog, Precious. With Dr. Lecter’s escape from custody, Clarice takes a hold of the story, finding Buffalo Bill and rescuing Catherine from his clutches on her own. She does this with Catherine screaming, the dog barking, Bill’s music blaring, while in a dark basement awash in exotic fluttering moths. Some writers contend that Clarice is beholden to father figures or re-cements the patriarchy by shutting down Buffalo Bill and being accepted into the FBI. They forget though that Clarice acknowledges the obvious hypocrisies and grandiose performances of power from Jack Crawford (Scott Glenn) and Dr. Chilton. These are not overly romanticized men that Starling is meant to fawn over. She must work with them in order to gain time with Lecter and climb the law enforcement ladder. She indeed idolizes her late father, is respectful of Crawford, and finds guidance in Lecter, but simultaneously possesses agency and ingenuity that help her survive. She faces most dangerous situations in the film on her own. It is still rare to watch a female character take on and accomplish what she does without needing a man to rescue her, or having a romance crop up to course correct what she should really value in life. Even though the movie casts a glaring spotlight on her status as a woman, that doesn’t mean that it exploits her and reconfirms men’s dominance over her. With all their imperfections, the one-of-a-kind Clarice Starling, Hannibal Lecter, and The Silence of the Lambs together endure as a landmark accomplishment for the horror genre.

TIFF 2020: ‘Shadow in the Cloud’ is an Extremely Tense Film in Need of a Better Script