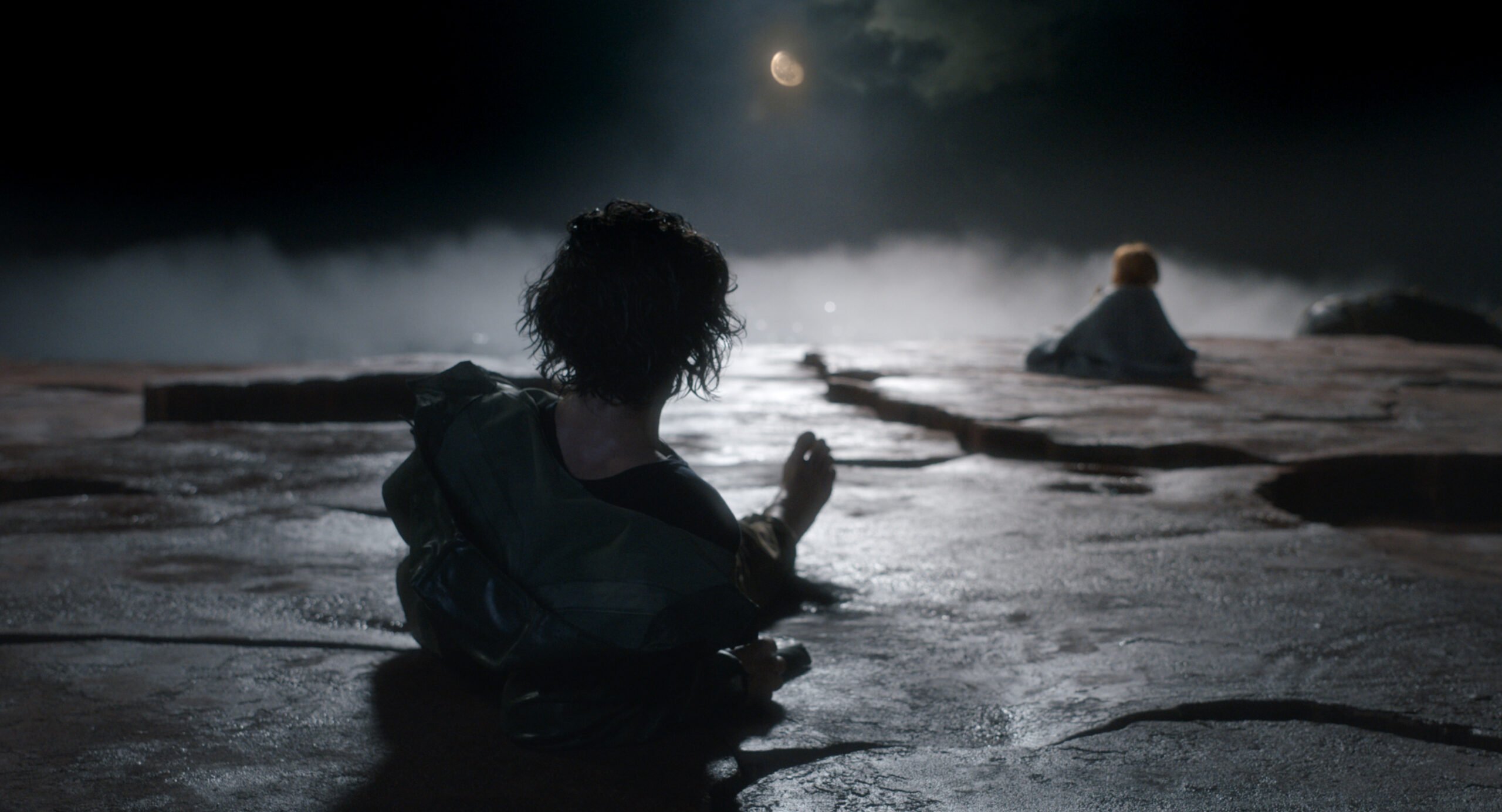 A union between two respected artists is always an exciting endeavor: Lady Gaga and Bradley Cooper, The Talking Heads and Jonathan Demme, Prince and Batman. In this case, the result is a post-modern take on the movie musical and also a puppet baby imbued with a haunted talent— both called Annette.

The film is the ambitious love-child of legendary musical duo Sparks and visionary French director Leos Carax. Both Sparks and Carax exist in their respective fields as auteurs who create unique and singular works that twist conventional pop stylings. It’s not surprising their collaboration is flamboyant, inventive, and striking. Sparks conceived of the story and developed it with Carax. They also composed the film’s music. For all the film’s innovation, there are times when its outlandish elements aren’t enough to buoy the sparse narrative. Ultimately, Carax is the right director for Sparks and the cast’s heavy-hitting lead trio is equally as appropriate for the dark & stormy fairy tale.

Henry McHenry (Adam Driver) is a brash, straight-talk standup comedian who pulverizes his crowds with the truth as he skulks across the stage accompanied by his slippers, robe, and a quartet of backup singers. His partner Ann (Marion Cotillard) is a beloved soprano that performs her tragic operas in a more upscale venue across town. Together, the high-class/low-class couple sing, fuck and sing, and make a puppet baby (in that order). After a fateful yachting excursion, their child reveals she can sing much like her mother. With the help of Ann’s accompanist and former lover (Simon Helberg), Henry turns Annette into an international sensation. But Annette becomes a divisive avatar for those who love her.

It’s difficult to successfully translate the stage to screen; to use the expansive language of cinema on a production born from the confines of live performance. The movie musical has always been one of the great spectacles of the screen and it’s fitting that Carax and Sparks inversely model theirs into as much of a staged production as they possibly can. Carax invests heavily in the outstanding performances of his cast and tactile production design. He eschews computer-generated visuals for an aesthetic that updates the grand sound stage productions of early Hollywood. He uses projections, stylized lighting, and puppeteers to create a world that’s immersive and tangible; from Annette’s bedroom to a storm at sea. These stylized and playful techniques are reminiscent of the DIY charm that became a hallmark for craft auteur Michel Gondry. It’s a fantastic treat for so much to be done in-camera rather than in post-production.

Mixed with the sullen whimsy of Carax’s Los Angeles are the various stages from which his characters perform. He includes set design for Ann’s contemporary operas and the single stool on the stage for Henry’s stand-up. He presents glimpses of both actor’s on-stage performances, complete with the physicality necessary to play to the back row. The way Carax utilizes Driver’s body and physicality is a tantalizing sample of how engrossing he must be live and on stage.

Despite the stellar cast and dazzling visuals, the simplistic plot drags the momentum down at points. A love triangle mixed with showbiz exploitation are straightforward and irresistible conflicts to latch on to. But the few melodramatic beats that would be conducive to the restrictions of a staged performance leave some of the heavy lifting to the formalistic elements of the film that are difficult to sustain.

It’s impossible to speak about this film without highlighting the other noteworthy performance, that of the puppet Annette. Designed by Estelle Charlier and Romuald Collinet, the wooden child is the crown jewel of Carax’s material world. The puppet is a knowing metaphor for the control employed by others who pull her strings to contort her into their will. The puppet itself is a fascinating creation and masterfully controlled but its purpose is to visualize the grotesqueness of her existence as a prop in the lives of the adults in her world.

The story was conceived by the art-pop duo Sparks. Brothers Ron and Russell Mael, who have performed together for 50 years, were the subject of Edgar Wright’s wonderful documentary The Sparks Brothers, which also debuted this year. The brothers’ brand of baroque rock, dance, and humor coalesce into an undeniably enjoyable curiosity. The film’s music resembles their later work, particularly that of Lil’ Beethoven, with its repetition and self-awareness. Born in Los Angeles, Ron and Russell are long admirers of the cinema, creating an Ingmar Bergman-inspired project for Sweden and several failed attempts at films of their own. While Annette has its issues, its sheer gusto and inventiveness make it a promising debut for what the brothers have in store for the screen going forward.

Annette is not your typical musical because Carax and the Maels are not your typical artists. This is a collaboration that was sure to confound and delight. It stands alone and most likely will for quite some time— or at least until Sparks’ next film.

Snakes on a Plane Was an Unforgettable Phenomenon, Based on a Forgettable Movie