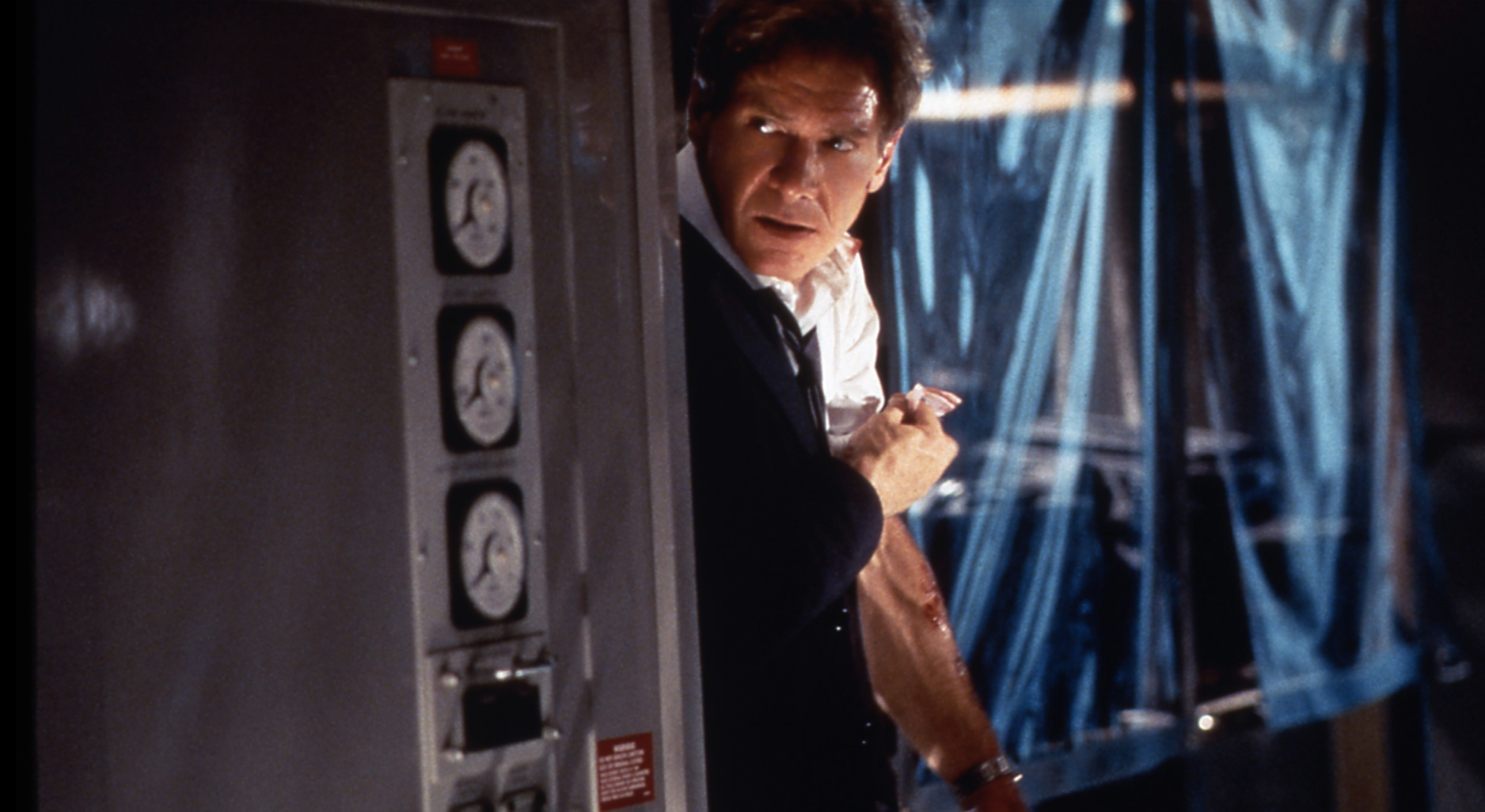 There’s probably never been a sitting president of the United States who was capable of kicking the asses of terrorists with his bare hands. Sure, many of the presidents have been ex-generals or otherwise of extensive military background.

But even the likes of Washington, Grant, and Eisenhower had reached a certain age by the time they were in the White House, and none of them ever had to go toe to toe with bad guys. These days, presidents are much more likely to kill terrorists with targeted invasions and drone strikes, but never by personally pushing them out of a plane.

Wolfgang Petersen’s Air Force One, which arrived in theaters in July of 1997 — 25 years ago this week — imagines a fantasy in which the president can, in fact, be an action hero, and even repel the hijacking of the titular presidential plane. Preferably as a rip-roaring score by Jerry Goldsmith is played.

The film, while not a product of the Simpson/Bruckheimer factory, is much in line with the blockbuster action tradition of the mid-1990s, as the entire conceit can be described in one sentence: “Air Force One gets hijacked.” There’s a bit of “Die Hard on the presidential plane” to it as well.

Air Force One is set in the aftermath of the Cold War, and the president — not particularly inspired by any actual U.S. chief executive — is James Marshall (Harrison Ford.) He’s introduced by giving a speech in Russia denouncing terrorism and publicly vowing, against the advice of his advisers, never to negotiate with terrorists.

We’re led to believe that this was a wildly controversial move, and it’s certainly one that prefigured the foreign policy of the Bush/Cheney years. There are even repeated references to Saddam Hussein moving troops around. One adviser does warn that “this could come back to bite us,” but at any rate, Air Force One is one of those movies that has a solidly right-wing message, even though all the significant people who made it are almost certainly liberal Democrats.

Following this speech, on the flight home from Moscow — thanks to a mole in the Secret Service — the president’s plane is hijacked by a group of Russians, led by Egor (Gary Oldman, as part of a run of ’90s villain roles that included his part in The Fifth Element a couple of months earlier.) They’re seeking to free a political prisoner who had just been captured in Kazakhstan, one with designs on nuclear smuggling and a new Cold War, (the film represented a rare pre-Borat use of that country in a movie.)

The hijackers know that the president has just declared he won’t negotiate with terrorists. Still, that declaration will certainly be tested, especially once the president’s own wife and daughter are taken hostage and threatened.

The film gets creative, with varying plans for rescues and help from the vice president (Glenn Close), who is told she could conceivably invoke the 25th Amendment. We even get the Defense Secretary (Dean Stockwell) declaring “I’m in charge here,” just as Secretary of State Alexander Haig did on the day of the assassination attempt on Ronald Reagan in 1981.

The film even turns into Top Gun briefly with a dogfight, eventually, it ends in hand-to-hand combat, and the famed “get off my plane!” catchphrase.

Can we believe that the president of the United States could really prevail in a hand-to-hand fight with terrorists? President Marshall, it’s established, is a combat veteran, and Ford was only 55 when the movie was released. On the other hand, he was Han Solo.

Arriving just four years before the 9/11 attacks, the film very much prefigured the rise of 24, although it combined the action hero and president figures into one person; that series often featured plots involving either Russian separatists or ultranationalists. Xander Berkeley, who played the Secret Service mole would later appear on 24. There’s also the character, as seen in other ’90s films and later on 24, who wants to resolve the hostage situation by killing all the hostages.

Wolfgang Petersen was the German director, best known for Das Boot, who came to Hollywood in the ’90s and directed a series of blockbusters, like In the Line of Fire and Outbreak, leading up to Air Force One in 1997. The Perfect Storm and Troy followed in 2000 and 2004, respectively, although his flop 2006 remake of The Poseidon Adventure, Poseidon, was his last film in the U.S.

Air Force One is certainly silly, reaches some questionable political conclusions, and its special effects look rather chintzy by modern standards. But a great hook, and a movie star performance from Harrison Ford, make it a very entertaining action movie.

Vengeance is Another Failed Satire on the American Divide