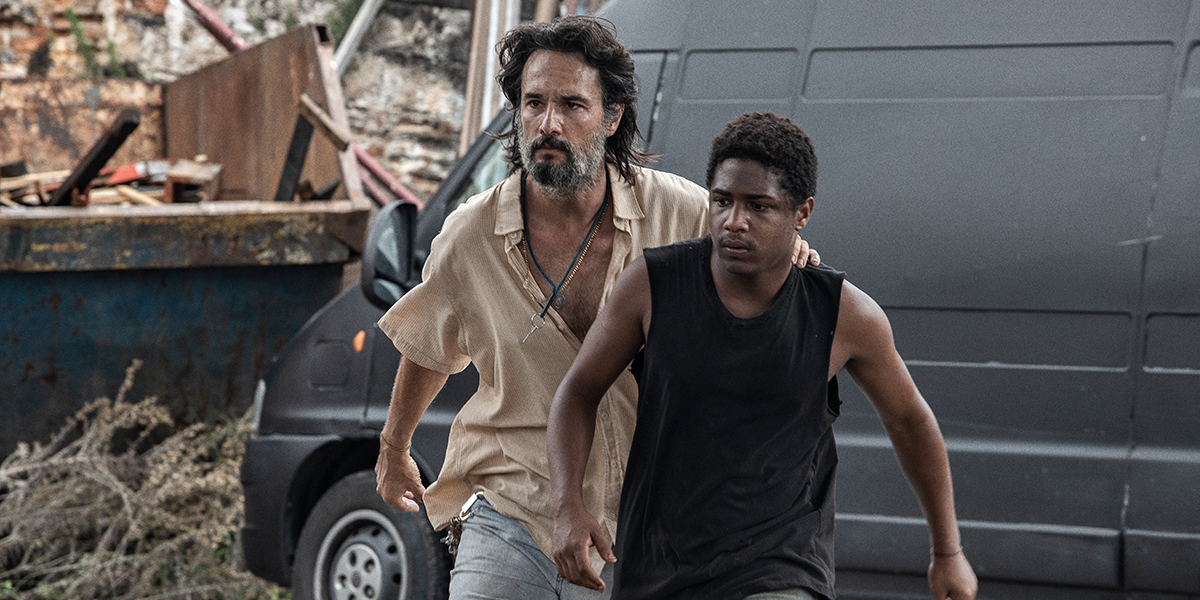 Nuanced in its portrayal of exploitative labor in Brazil, 7 Prisoners is a tense, harrowing journey through the underbelly of São Paulo. It’s a white-knuckle thriller that never shies from the bleak reality of every character’s circumstances, delivered with a careful subtlety amidst relentless trauma. Equal parts detailed character study and unflinching depiction of modern day slavery practices of migrant workers, Alexandre Moratto’s sophomore film displays a never-ending cycle of exploitation of those less fortunate.

Finally leaving his rural life behind to help make money to take care of his mother, Mateus (Christian Malheiros) gets into a van that will take him to a job opportunity in São Paulo. Once there, it becomes immediately clear that the opportunity is more of a prison sentence as Mateus and his peers end up working in a junkyard for Luca (Rodrigo Santoro), paying off debts they never knew they accrued until they are finally allowed to leave. It could be a year or longer of sifting through busted down automobiles, stripping them of copper and stainless steel to sell, attempting to pay off everyone’s debt as well as keep Luca making money.

The constantly shifting power dynamics in 7 Prisoners are what make the film so enrapturing. Mateus and Luca’s relationship of prisoner and warden is where things begin, but the genius of Moratto and Thayná Mantesso’s screenplay is how their relationship seems to evolve without actually breaking free from that initial dynamic. It’s the realization that crime pays no matter what your economic background may be. How much you suffer versus inflicting pain is what differs.

7 Prisoners is a taut thriller that maintains an intensity throughout. It hurts to watch, especially in those moments when the film contends with why human trafficking, sweatshops, and child labor can exist unabated. It’s the film’s initial scenes of them driving through beautiful rural landscapes to finally go through a favela and work their first day that drives home the carnivorous nature of exploitation. Mateus, a young man who dreams to be an engineer on planes, is forced to confront a grim reality – one that eats away at his soul.

It’s fascinating to watch Santoro and Malheiros’ performances against each other, both presenting more-than-capable characters, but Luca is the experienced, weathered individual that has already been chewed up by the city’s criminal underbelly. He knows how the world works here, and though aspiring to be an engineer is an admirable pursuit, it’s one that Luca sees as unrealistic. 7 Prisoners ends up being a coming-of-age story as Mateus becomes consumed by the heinous world that now surrounds him and reshapes his entire being. Melheiros imbues the character with this confidence of how things should be that gets broken down over time.

There’s also a compelling dynamic between Mateus and the group of young workers he arrives at the junkyard with – including a childhood friend. A bond is formed between the group but Mateus’s inherent knack for being a leader immediately drives a wedge into their camaraderie. It all piles up and picks away at Mateus: leaving home for the first time, having his entire view of the world shattered, and then losing the only people he might be able to call friends. The complexities of Mateus’s newfound circumstances embody the world Moratto presents in 7 Prisoners.

Realizing that Mateus and Luca’s roles in life are two sides of the same coin – master and slave in an unforgiving climate where neither is actually the ruler of their domain. Gears in a machine of exploitation that grinds them down into husks, where one becomes disillusioned by what little power they have and the other blinded by the autonomy suddenly taken from them. Regardless, there’s no way out. At the heart of 7 Prisoners is the understanding that these systems are in place because they work. They keep the world turning at the expense of those whose blood, sweat, and tears go into keeping it turning. 7 Prisoners pulls no punches in portraying a world so hellbent on destroying what little humanity it has left.

TIFF 2021: As In Heaven Rages Beyond its Period Setting

TIFF 2021: Attica is a Tense Tick-Tock of the Tragic Prison Uprising