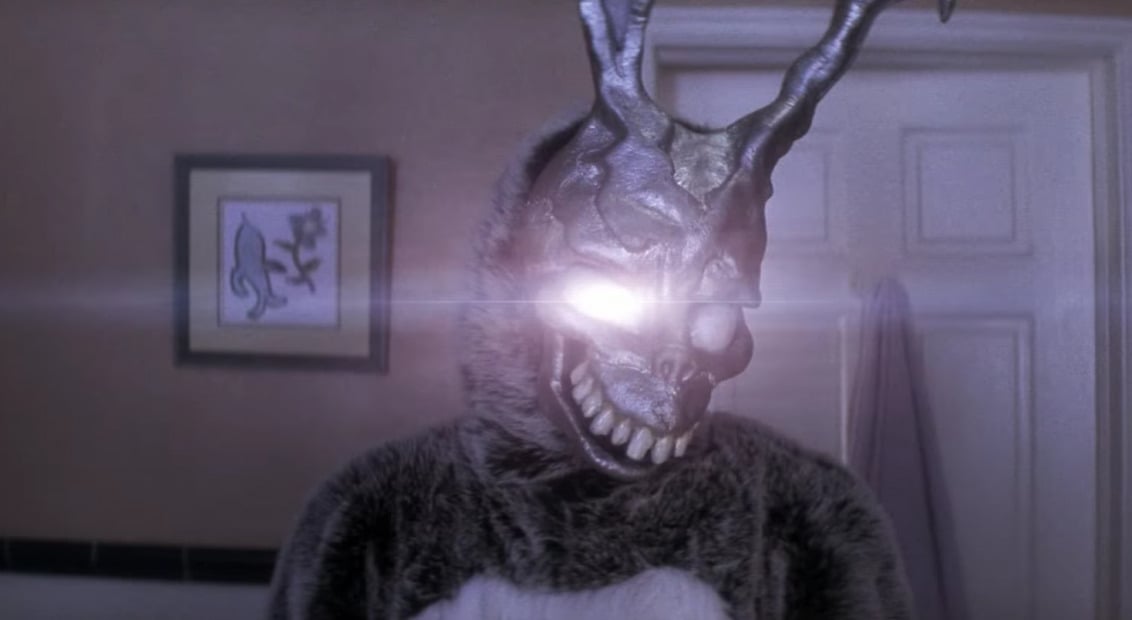 Richard Kelly’s Donnie Darko begins with a large object crashing into a building. That the film was released just a few weeks after the 9/11 attacks, it was a pretty safe bet that it wasn’t going to become a big box office hit.

However, the film emerged relatively quickly as a cult classic, since released in various editions and different director’s cuts. Donnie Darko celebrates its 20th anniversary this week — after it premiered at Sundance that January – and rewatching it now it’s shocking how much it anticipated about life today.

Even though it was released in 2001, Donnie Darko was set in 1988, and its style of blending horror tropes with ’80s nostalgia anticipated Stranger Things by nearly a decade and a half.

It also featured a hero battling mental illness years before such a thing was common in movies, while Beth Grant’s sneering teacher character would likely be called a “Karen” today. And one need only turn on the news to watch people in community meetings screeching about the books their kids are being taught, as Grant does in Donnie Darko.

Donnie Darko is an exceedingly strange film about a teenager in 1988 suburban Washington who suffers hallucinations, including of an evil bunny named Frank who predicts the end of the world. One night when he’s out sleepwalking, a jet engine crashes into his bedroom, which would have killed him had he been home.

Most of the plot follows Donnie’s everyday high school existence, as he meets a girl (Jena Malone), is encouraged in his obsessions about time travel by a teacher (Noah Wyle), while also meeting with a less supportive therapist (Katharine Ross.) He even insults a grifting motivational speaker (Patrick Swayze) who comes to speak at his school.

The plot leads into one of those crazy nights that always seem to happen in teenager movies before it’s strongly implied that the vision about the end of the world has come true. The plot then doubles back, which is the sort of ending that got fans of the movie arguing about its meaning for years. (This explainer, published by Dan Kois in Salon in 2004, seems to be the best explanation as to what happened in the movie.)

Jake Gyllenhaal had been in movies before Donnie Darko, from City Slickers to October Sky, but Darko represented his first grown-up role, at age 20, and helped cement him as the movie star that he’s remained to this day. His sister Maggie played his sister in Donnie Darko, delivering that immortal first line (“I’m voting for Dukakis,” even though that 1988 Democratic candidate doesn’t appear to have won the election in any of those timelines.) And look for Seth Rogen in a tiny role as Donnie’s classmate.

In 2007, Kelly released a follow-up that was even more batshit, Southland Tales, and also took the box office flop/cult classic route. His film after that, 2009’s The Box, was a flop as well but skipped the cult part; he hasn’t directed a feature film since, although Kelly has kept busy with various tie-ins and new cuts of his first two movies. He’s also said to be working on a biopic of Rod Serling.

Donnie Darko, which is currently streaming on Tubi, is one of the 2001 movies that has best stood the test of time 20 years on.

Oculus— An Essential Dose of Heart and Smarts