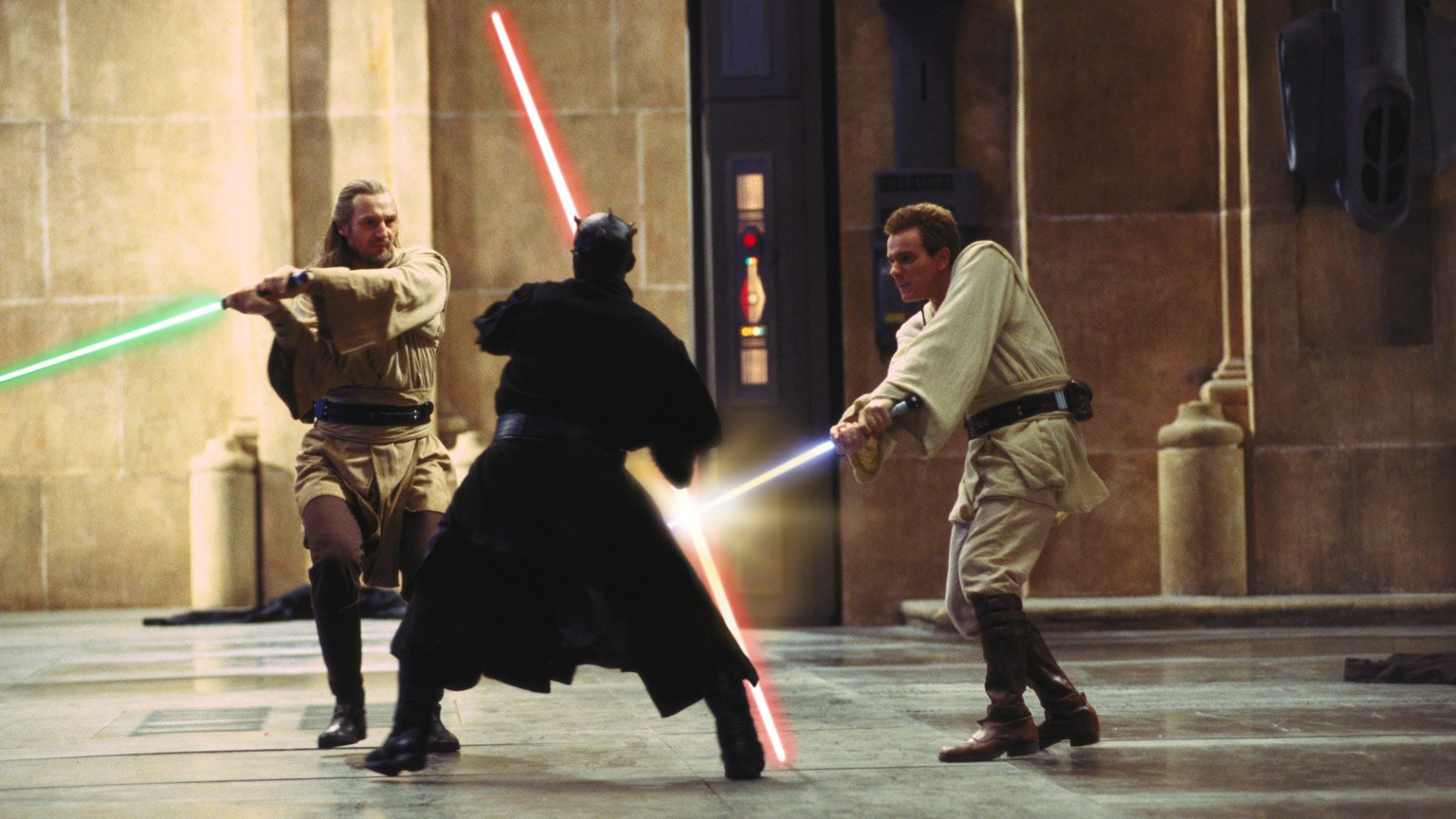 A long time ago…in 1999, the pop culture zeitgeist was caught in a Star Wars maelstrom. Writer-director George Lucas and his crack creative team had gone back to the well that made space opera cinema what it is known and appreciated as today by producing the first Star Wars movie in 16 years. Yes, it was difficult to fathom, but the legion of Star Wars fans the world over had waited over a decade for a new film. Not since 1983’s Return of the Jedi, which concluded what is today commonly known as the ‘Original Trilogy’, had they rejoiced in a new cinematic adventure. This new endeavor was not to be a sequel, but rather a backstory that would relate how Anakin Skywalker, once a proud Jedi Knight and defender of justice, was encouraged to renounce his altruistic ways, embrace the dark side of the Force, and become Darth Vader, one of the most iconic antagonists in film history.

Understandably, the anticipation was palpable. No self-proclaimed Star Wars fan was immune to the hype machine, which began in earnest during the fall of 1998 when the very first teaser trailer erupted on over the internet. Far be it from me to claim that I wasn’t caught up in the excitement. While since the release of the oft-maligned ‘Prequel Trilogy’ films my fandom has lessened to a degree, back in the late 1990s as a teenager, Star Wars was a pretty big deal. Nothing to obsess over, but it definitely landed the number 1 spot on famous franchises and properties that caught my attention and occupied many of my hobbies. The re-release of the original films in their special edition formats clearly boosted my interest in the series, and the prospect of relishing a new adventure had many, myself included, salivating. Star Wars Episode 1: The Phantom Menace could not come soon enough.

It was also a period during which I spent a vastly large portion of my free time perfecting limited video gaming skills, be it on platform consoles or on the computer. While most of my favourite entries were of the sporting variety, I was not a complete stranger to action-adventure games. The knowledge that a video game based on the film itself was in the works, albeit not as thrilling as the prospect of an actual movie, was also something to take note of. Little was I aware of the infamous quality of most movie tie-in video games, to say nothing of the excitement of a Star Wars game, regardless of what it was related to, period. Suddenly, The Phantom Menace was on my mind twice as much.

Looking back, late spring and summer of 1999 is such a strange memory. Everywhere one looked, their view was inundated with a bit of Episode 1 marketing, be it on Pepsi cans, posters, toys, and anything the studios could get their hands on. As crass as it might have actually been, I was not quite at the age at which I could think about such matters as market oversaturation of a product seriously, and, coupled with the fact that my fandom was very strong, I didn’t really care. The important thing was that damn movie. Potato chip packaging featuring Darth Maul was fine and all, but nonetheless secondary to what George Lucas, genius filmmaker, had reserved for us.

The Phantom Menace finally arrived in theatres in May and a group of friends, as well as my younger sister (we’ve always been very close), went to see it on the Friday of the week it opened. Our excitement was sustained for the better par its two-hour runtime even though there was a gut feeling in each of us that something was amiss. None of my friends were at the time nor are currently hard-core movie fans and my own critical astuteness was not, back then (nonexistent), as developed as it today (pedestrian). Even so, it was a curious experience. We had fun, but…There was something innately weird about how much time was allocated to senatorial debates, to the biological explanation behind the once mystical Force, to the utter slapstick nature of Jar Jar Binks. The pod race sequence was stupendous, we had been gifted with a lightsaber battle to end all lightsaber battles, and it was indeed fun to revisit old friends like Yoda and R2-D2, yet I think deep down inside we knew that it just didn’t reach the heights of the movies we had watched countless times and learned to love.

Sometime after seeing the movie a couple of times, the officially licensed video game was released for PC. Even though the late 1990s brought with them some high-caliber gaming consoles such as the Nintendo 64 and the first Playstation, I took a liking to play on desktop computers. Most of my friends owned the other consoles and invited me over to play at their houses anyways so I figured I’d do my own thing if I felt like playing at home. I didn’t purchase the game with hard-earned cash until after the current high school year finished (which, looking back now, was an entire month after the film even opened theatrically in May. The summer movie season begins curiously early, does it not?). Shortly after writing my final exams, the hunt for the store offering this most coveted of toys at the best price was in full effect and, before I knew it, I was bringing back home the packaging that featured the beautiful theatrical poster on the front.

My taste for video games has always been somewhat dubious. I think, despite playing them a fair bit during my childhood and teenage years, I never really understood the difference between a good game and a poor one. Reading reviews and comments of the game, it was widely accepted that the finished product was sub-par, failing to replicate the sweeping sense of excitement a Star Wars game should, although one could get snarky and argue that it does the job just fine considering the quality of the film it is based on. Regardless, I spent the next weeks enjoying myself to no end by reliving all the action from the film. Lousy voice work and repetitive gameplay didn’t seem to really bother at all. The game was not even particularly long or difficult to beat for that matter, but I unquestionably enjoyed all the time I spent hacking through hoards of battle droids and trotting the streets of Mos Espa, asking strangers hoards of questions to finally get to where I already knew the story was taking me. Unlike the vague, underlying sense of disappointment with the movie, I was never under the impression that what I played was bad. I even replayed the game a few times before finally putting aside for the next best thing, which, incidentally, I can’t even recall at this time. It was pure, unfiltered fun being a Jedi in a galaxy far, far away.

All that being said, the fun factor with the game faded fast. I vividly remember spending many hours in front of the computer during the summer, even when it was extremely pleasant weather outside, just so I could relive a space opera adventure. After that, I can’t say I played the game much at all. As summer faded, so did my love affair with the game I had spent months anticipating. Money was earned through a variety of chores such as cleaning and mowing lawns, then spent at the store, but all of that was forgotten when the fall came. It was certainly neat playing out scenes from the film, but ultimately, despite its flaws, it was the film that would have the more lasting impact.

As I thought about how to approach this trip down memory lane for Sound on Sight, I watched a few YouTube clips from the game. Obviously, by today’s standards, it doesn’t look nearly as swanky as it did back then, and the voice work is still chillingly bad. Whatever the game lacks in quality, those clips still brought back some fond recollections. Yes, there were frustrations when solving puzzles (quite boring ones too), and the fact that the pod race was not even a level included in the game always felt odd (that sequence was translated into its very own game in fact), but a sweet feeling of nostalgia fell over me as I viewed those clips, and that can never be a bad thing. In my heart of hearts, I’d be lying if I said I didn’t think it was a fun game even though few would probably agree with that sentiment.

A few years ago The Phantom Menace was released in theatres with the added attraction of being up-converted to 3D. 20th Century Fox settled for a February release, probably because, traditionally, it’s not an important film month box office-wise, and anything with the Star Wars brand plastered across it will sell, so why not during the dead of winter? I opted out from seeing it immediately but went a week or two after it opened. I can’t recall specifically on which day I saw it but I do know it was on a weekend. Much to my surprise, the theatre room was practically empty. Were its box office earnings front-loaded, with everyone and anyone interested in watching the weakest of the Star Wars films in 3D having gone on opening weekend? That may have been true, although I couldn’t help but feel mildly disappointed and awkward by the thought of being virtually alone in a cinema room playing a Star Wars film. The issues that affected the movie when I watched it numerous times in 1999 and afterwards on VHS and subsequently on DVD were still there, and yet, like with the licensed video game, a warm, comforting nostalgia washed over me as Qui-Gon Jin, Obi-Wan Kenobi, and Queen Amidala zipped across the galaxy to fight off the dreadfully baptized Trade Federation. Much of the acting is stilted, and much of the dialogue is uninspired, but I’ll be damned if there wasn’t a part of me that didn’t enjoy the experience of watching a Star Wars film once again on the big screen, even though it is probably the worst one of the bunch.

That speaks volumes of the franchise’s appeal. Even when the product does not rise to expectations, there is usually enough there to attract casual and die-hard fans alike. My days as a die-hard have long been over, but I was still more than willing to pay for a ticket to see Phantom Menace in 3D, fully aware of its flaws. Meant initially for children, the franchise has captured the imagination of people of all ages for decades now. Whatever the upcoming The Force Awakens has in store, one thing is abundantly evident when it comes to Star Wars in all its shapes and forms: the force will be with us, always.

The good, the bad. My first trip to Montreal Comiccon was a smashing success