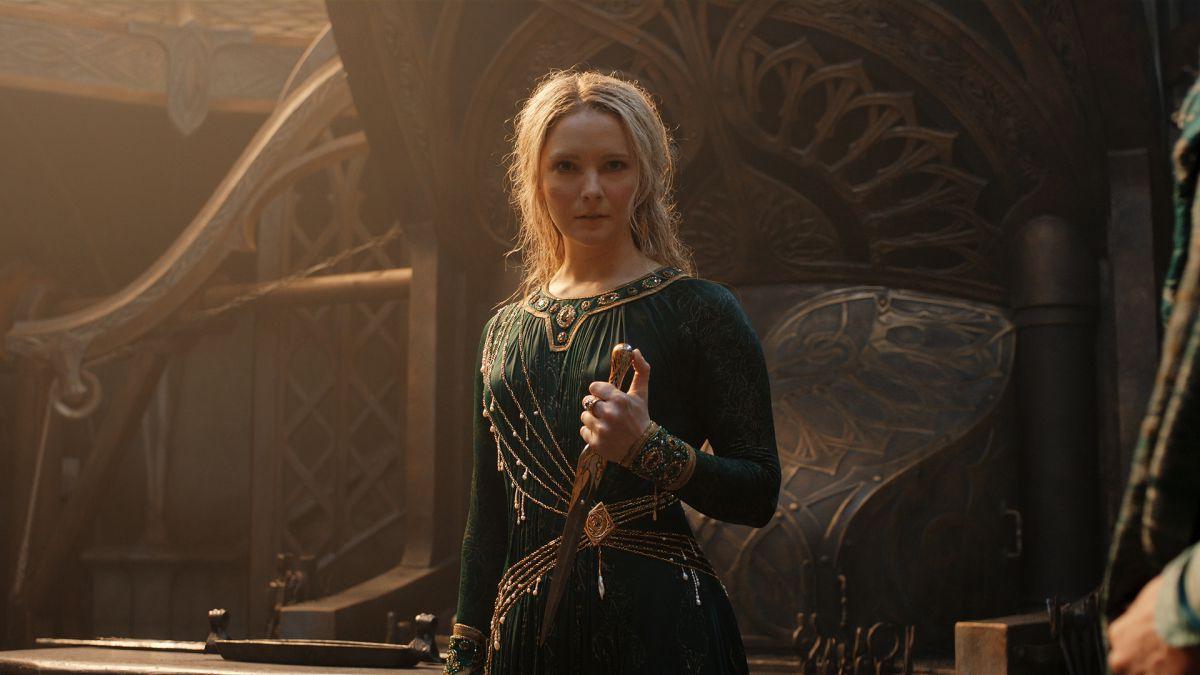 He has roamed the lands for many years and with many different faces. Even those who have never personally crossed his path know him by several names. Among them: Sauron.

The Lord of the Rings: The Rings of Power (ROP) concludes its maiden season with episode 8, titled “Alloyed.” At the risk of having the air sucked out of the room, no, there is no large scale battle for Middle-Earth this week. Clearly, the plan all along was to have major fisticuffs in episode 6, which was when the fires of Mount Doom erupted, turning the Southlands into what fans know as Mordor. The past two weeks have been more about how the many bands of heroes make do with the age-shaping events of 6.

“Alloyed” concerns itself predominantly with Lindon, the Elf capital, and the Harfoots search and rescue of the Stranger. The Humans of Southlands, now Mordor, sit the finale out, as do the Dwarves and, strangely, Adar. A character who was built up so much and revealed in episode 6 to be even more compelling than previously imagined had about 10 seconds of screen time in episode 7 and isn’t around at all this week. A curious choice.

Nori, Poppy and the gang are tracking down their clumsy friend, leaving the remaining Harfoots to hold camp. The evil-looking elves who made cameos recently locate the target before the protagonists, and thus “Alloyed” attempts its first big reveal of the chapter. That is, until the more obvious truth is divulged later in the instalment after the small-sized folk assist the Stranger in banishing the assailants with their own magic staff. The relationship between Nori and the Stranger has been not quite on par with that between Elrond and Durin, but a strong second place finish. As far as character couplings go, theirs’ possesses layers of decent emotional depth. Nori and the Stranger play off one another nicely, which is saying something given how contrasting those characters are. After all, the puzzling man from the stars could barely speak in the earlier episodes.

As for the Elves, the action takes viewers back to Lindon, where their king, Gil-galad, announces that since the Southlands went to hell (almost literally), the Elvin tree of light and power is “bleeding leaves.” Knowing that, the time has come to depart from their capital and make way for greener pastures. Not so fast, argue Elrond, the inventor Celebrimbor, Galadriel, and Halbrand. With the tiny piece of mithril gifted to Elrond by Durin from the mines of Khazad-dun, there may be a way to harness enough power to keep their society alive.

Celebrimbor therefore works tirelessly with Halbrand, solid blacksmith in his own right, to manipulate the shard of stone. Together they do what denizens of Middle-Earth do best when crafting physical manifestations of unparalleled power. Enter, at long last, the first appearance of some articles that hold a strong place in Lord of the Rings lore. Hint: it’s in the IP’s name.

Galadriel, meanwhile, grows increasingly suspicious of Halbrand’s place in the adventure. His constantly being in the right place at the right time and navigating rough waters – figuratively and literally – sounds quiet alarm bells in her mind. Thus comes the second great revelation “Alloyed” his store…

So ROP is done for now. As of this writing, production on season 2 has begun. Given the show’s unbelievable scale, it comes as no surprise that early plans are for the second season to air no earlier than 2024. Where does “Alloyed” leave fans? Is the episode in of itself good at all? The highs of “Udûn” are a couple of weeks behind us at this point and, episode 8 included, have not been reached since. This last instalment of ROP’s initial campaign is decent overall, much like the entire stretch of chapters. There is a sense that greater things are ahead. More importantly, a sense that more dangerous challenges lie ahead. Some bad things have happened this season, events that put the heroes’ plans into a tailspin, hence the forging of new weapons by the Elves.

In that light, “Alloyed” operates a lot like many episodes this year have. Some genuinely interesting conversations and debates are held, ones that astute fans know will ultimately lead to big events. By contrast, casual viewers can soak them up to better appreciate the nuances and ideas in J.R.R. Tolkien’s legacy. There is some momentum here, but not as much as one might like. Some brief scenes are spent back in Numenor, where its king, barely seen at all, exhales his final breath. The few moments spent there reminded this writer of a character they had completely forgotten existed. That has been symptomatic of season 1. For whatever reason, ROP wants to cram so much into its plot that supplemental characters are introduced, then forgotten for weeks at a time. They show up again much later as if their reappearance is supposed to mean something.

Wayne Yip returns for directing duties and puts in a solid effort that echoes the flair Charlotte Brändström injected into her work. There is one sequence that has Galadriel and Halbrand engage in a very intense heart-to-heart that plays visual and aural tricks on the viewer, as well as the characters having the meeting. Such sequences for which the directors have gone the extra mile to produce a unique effect haven’t happened very often so far in ROP. When they do, it’s been quite good and effective.

For the most part, with respect to quality, tempo, and intrigue, “Alloyed” is on par with, say, the second and third episodes. It’s not at all bad, but nor it is gobsmacking. There are stretches when it seems as though the show’s creative forces are relying on the beauty their product sports (and beautiful it most certainly is) whilst biding time before things “get real” in future episodes and, at the time of this writing, future seasons. Good but not great is the episode’s moto and, for all intents and purpose, that of season 1.

The Lord of the Rings: The Rings of Power will return, but not as soon as usual.

-It’s bit odd that the evil-Elves proclaim the Stranger to be Sauron only for that to be debunked a few minutes later. Making viewers believe the star man was Sauron might have been a better idea to have hang earlier in the season and then, at the end of the finale, reveal that he is in fact a proto-Gandalf. Be that as it may, that part of his name in the mysterious tongue the dark Elves speak means “the wise” or “wizard” is a nice touch.

-Galadriel’s hallucination, in which she sees her deceased brother, is one of the nicer moments of the episode. Our protagonist has not had many opportunities to relax and be happy. The few moments of respite leave such a pleasant, peaceful look on her face.

-The way in which the season concludes the Nori-Stranger storyline makes sense given what we know happens in the Third Age. Why would Gandalf have such a close relationship with Hobbits, all of a creatures, were it not for what we assume is going to be a whale of an adventure in season 2 as Nori and the wizard explore his origins?

-The revelation that Halbrand is Sauron, or at least a guise of his, may divide fans. It’s not as though we have seen much of Sauron in previous iterations. He is either a humungous fiery eye, or a Goliathan being adorned in battle armour. That said, if one reads Tolkien’s Appendices, the text about the Second Age explains that the villain was a very active participant in its events. In fact, his strategy of gaining the upper hand is very much that of a deceiver, a trickster. Whether fans enjoy the reveal, it does, technically, fit with Tolkien’s work.

-Finally, some rings are seen in Rings of Power. It was getting worrisome that an entire season would go by with any mention of them. Interesting that we get to learn why 3 were made by the Elves.

Welcome to Wrexham is a Collection of Highs and Lows