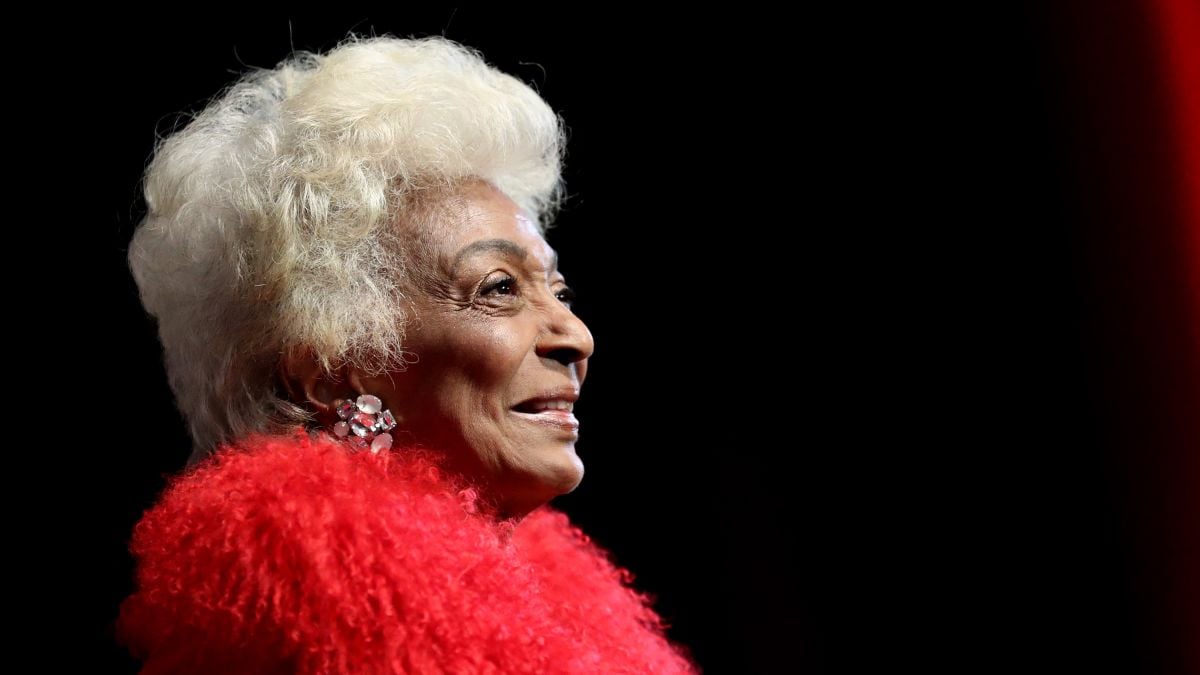 Being a TV icon is both a blessing and a curse.  The blessing is obvious:  lucrative fame, a fan base, recognition within and outside your particular field of endeavor.  The curse?  You have now become defined, and there’s little appetite for you to appear outside that definition.  Some are crushed by that burden.  Some wear it so lightly, that even the curse becomes a blessing, and such was the case with Nichelle Nichols who, for much of the world would always be Star Trek’s Lieutenant Uhura.

She seemed to know she was born for the limelight early on, singing with Duke Ellington when she was only 16.  By the time she was cast in Star Trek, she’d gotten some acclaim for her stage work, had appeared in small parts in movies, but Trek – as anybody who has walked the planet in the last half-century knows – made her.

She’d had an affair with ST creator Gene Roddenberry before he was married (to Majel Barrett who was cast as Nurse Chapel) and had been cast in his short-lived series about the peacetime Army, The Lieutenant.  I don’t know if it was the affair and/or her performance on The Lieutenant that had anything to do with her being cast on Trek, but it was a first-rate choice otherwise she would not have engraved herself so deeply in our collective pop culture consciousness.  But I don’t think the series served her well.  In later years, she would always speak fondly and warmly of the show, and especially of the vision of the show; a vision where race (or, for that matter, species) didn’t matter.  But earlier on…

David Gerrold, who wrote one of ST’s most fun scripts – “The Trouble with Tribbles” – would become a chronicler of all things Trek after the series was cancelled in 1969 after its third season.  In his 1973 book, The World of Star Trek:  The Show the Network Could Not Kill, he writes about a panel of ST behind- and in-front-of-the-camera personages at the 1972 International Fantasy Film Convention.  Nichelle Nichols was on that panel:

“In the third season, as far as I was concerned, we were just marking time…the things we had set as the tone and the mood of the show, the brotherhood of man and the family of the ship, were completely lost.  We started doing silly old cliches…”

Nichols, on the same panel, talks about an episode in the third season – after Roddenberry was no longer producing the show – where the original script had Uhura taking over the helm because all the usual boys-in-charge were off planet-hopping somewhere.  But then the script was rewritten to keep her in her Communications Officer chair:  “The attitude was that you can’t have females taking over a man’s ship.”

ST – and I say this as someone who is still a fan of the original series despite it’s (many, many) flaws – always talked a better game than it played.  Its vision of post-racial identification and gender equality was fine, but not only were the three principals all white males, rarely did a POC even play a prominent guest spot.  And three centuries in the future, the female crew members were in micro-mini skirts; I don’t remember any of the male crewmen having to display their gams (although, ok, they frequently got the then-buff Shatner to get his uniform shirt torn).  And while Uhura has often been referenced as an empowered female POC, often she was relegated to, “Captain, I’m frightened!” kind of dialogue when the pressure was on.  In this, I don’t think Star Trek was much different than what was going on all around the dial; there was, in my eyes, just a greater disparity between what the show was supposed to be about and what it was.

I remember a Showtime documentary (whose title, sadly, escapes me) made back in the 1980s which looked at how, in each decade from the 1920s on, the future had been envisioned by the pop culture visionaries of their respective times.  One of the talking heads in the doc made the point that one of the reasons those predictions were usually so far off is that they weren’t so much predictions as extrapolations of the present.  For instance, one talking head pointed to a promotional film made by one of the home appliance companies for the 1964 Worlds Fair showing the kitchen of the future.  What hadn’t been anticipated, the talking head said, pointing to the high-heeled, puffy-skirted housewife flitting around all those space-age appliances, was that that woman might have a job.  Star Trek suffered the same foible – it wasn’t so much a vision of the future, but an idealistic vision of the present, and I think Nichelle Nichols – along with all the other women who appeared on the series – suffered from that.

But, bless her, she gutted it out.  She was frustrated by the limits given her character, ticked off at the hate mail she was getting as one of the few Black characters in any kind of professional position on TV at the time and had considered leaving the series at one point.  In an oft-told story, she bumped into Rev. Martin Luther King at an event, and he urged her to stay on the show; she was a symbol of promise for the Black community, and especially Black women.  She took the charge seriously and from 1977 through much of the rest of her life, she worked with NASA to promote opportunities to attract a more diverse pool of applicants to the space program.

Some of that racist-fueled harassment came from a scene all her obits bring up in the episode, “Plato’s Stepchildren,” where telekinetic aliens force her to kiss William Shatner’s Captain Kirk in one of TV’s first interracial kisses.  Supposedly, several versions of the kiss were filmed (in some, it was only an almost kiss), but Nichols and Shatner deliberately screwed them up so that the take used was the one that appears.  Still, she bridled at the fact that the captain – who seemed to be bedding some alien priestess or princess in every other episode – had to be forced to kiss her.

I shall have more to say about the trailblazing, incomparable Nichelle Nichols, who shared the bridge with us as Lt. Uhura of the USS Enterprise, and who passed today at age 89. For today, my heart is heavy, my eyes shining like the stars you now rest among, my dearest friend.

She had a career after Star Trek, although nothing which resonated like her time on the series unless you count her appearances in the big screen franchise entries featuring the original cast.  While some of the shortcomings of the mother series were addressed in those films, and the supporting actors were given a bit more to do, those films still primarily remained the William Shatner/Leonard Nimoy/DeForest Kelly show.

But what I meant about turning the curse of iconography into a blessing was Nichols’ carrying on that charge the Reverend King had given her.  Whatever had chafed her about her role on the show during its day would gracefully fade in time:  “All the people on Star Trek will always be known as those characters.  And what characters to have attached to your name in life!”  Perhaps that role as an icon, as a symbol for minorities, for women of color, is bigger than any acting role.  It’d be hard to argue otherwise.

“I was blessed in always knowing what I wanted to do,” Nichelle Nichols would reflect, and the truth of that is evident from those teen days with Duke Ellington.  “(By) the grace of God, I’ve been able to succeed…”

We celebrate the life of Nichelle Nichols, Star Trek actor, trailblazer, and role model, who symbolized to so many what was possible. She partnered with us to recruit some of the first women and minority astronauts, and inspired generations to reach for the stars. pic.twitter.com/pmQaKDb5zw

One For the Road: A Dramedy With Style and Grace