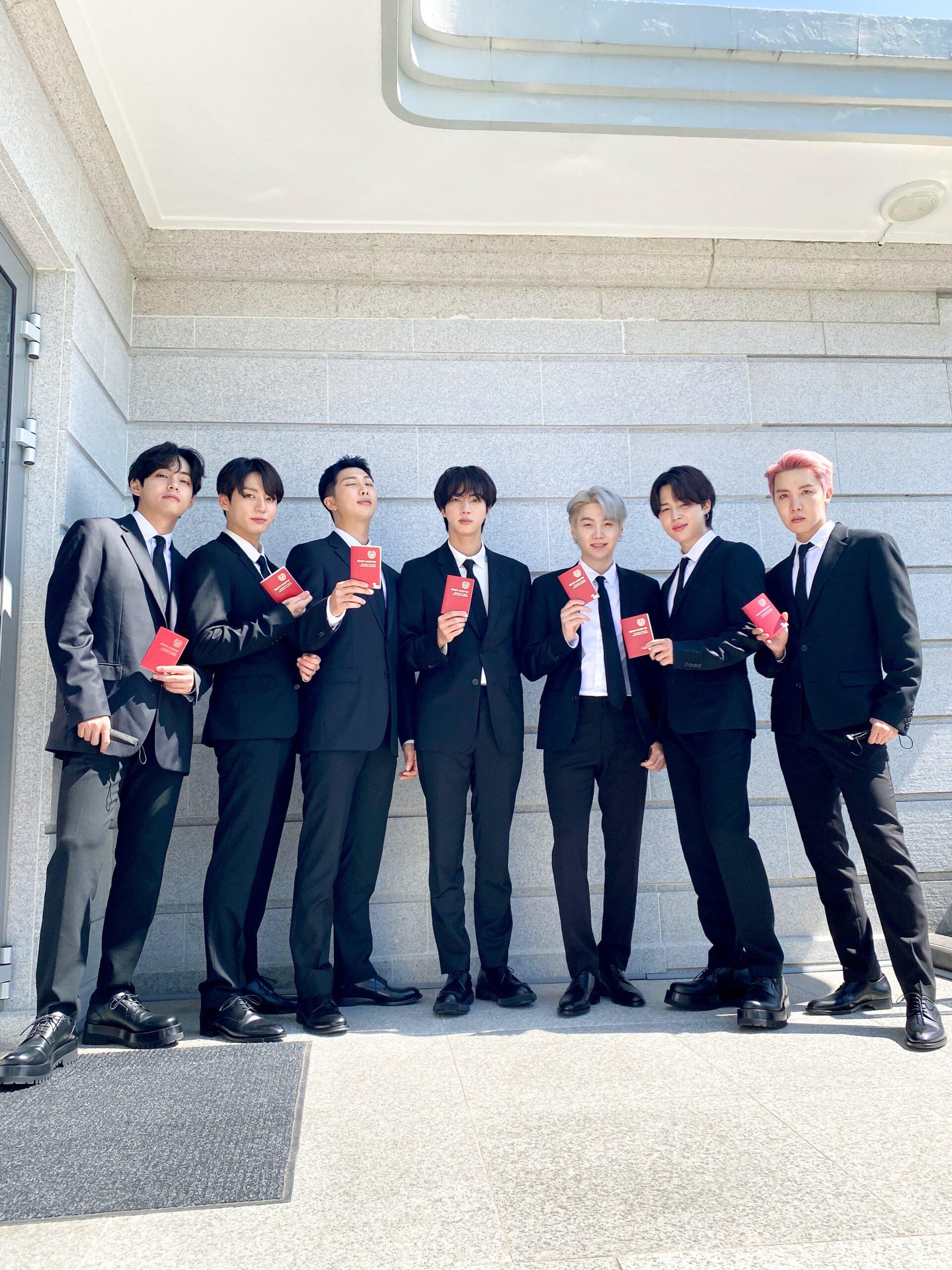 If you come to the blog here on Tilt regularly, you’ll know how much of a BTS fan I am. I love their music and their style, their look and their talent. They just make me happy honestly, but there is more to my appreciation of them than these points alone. The group are making a massive different to the music industry and becoming stars and role models across the world. Many consider them to be a significant source of pride for South Korea and their latest achievement is strong evidence to support this. BTS have officially been named as “Special Presidential Envoys for Future Generation and Culture” by the South Korean president Moon Jae-in.

This decision was made by the president back in July but today was the day when the group gathered at the Blue House in South Korean to accept their certificates of appointment in an official ceremony. The formal affair involved each member receiving their own certificate from the president directly but as well as that, they have also been granted diplomatic passports in accordance with the law following their appointment as special envoys. This in itself is a huge occasion as diplomatic passports are a great honour. They are also rather difficult to obtain due to what they allow the holder to do. Diplomatic passports are given to non-government officials who are of particular standing in their country.  They also allow the holder to travel to almost 200 countries without the need for a VISA so as you can imagine, only upstanding citizens who have reached monumental heights are able to receive them. This achievement is impressive enough as it is but it becomes even more so when you look at the official criteria for the diplomatic passport. According to DiplomaticConsulting.com, here is what does not qualify.

As you can see, applicants younger than 30-35 are not normally considered “unless they have achieved something outstanding”. The appointment of these titles and these passports is a major feat for these boys, showing how much of an inspiration they are not only to their home nation of South Korea but also for the world. They bring positivity and joy to the lives of so many millions of people and this becomes all the more impressive when you consider their humble beginnings. They were from a small talent agency in South Korea, up against major agencies who wouldn’t give them a second glance. They played to miniscule crowds, promoted their shows themselves as their agency couldn’t afford marketing and kept going despite every single odd being against them. BTS forged their own path with their music and their “rebellious” nature, not really fitting into directly into the hip hop crowd that they were initially aiming for but not suiting the defined K-pop box either. As the years went on, they created music of all sorts of genres from hard-core rap (courtesy of the rap line) to soft and soothing ballads (thanks to the dulcet tones of the vocal line). This theme of refusing to fit into one set stereotype has never changed during their career, as the band has always been highly versatile in terms of their musical style.

Despite the hate, criticism and mockery that they have faced from when they debuted to this very day, they continue to be themselves and let their own style shine through their music and their performances. They have become global superstars with one of the most diverse fan bases that I have personally ever come across. But their new titles and passports are proof that they are more than just a band. They are bringing the South Korean culture to parts of the world that may have never known anything about the country had it not been for their love of BTS. Both president Moon Jae-in and First Lady Kim Jung-sook acknowledge this on the official presidential website blog for South Korea as Moon Jae-in states “In many ways, I am very grateful that the status of K-pop and K-culture has been raised to the highest level, which greatly elevates the dignity of the Republic of Korea” whilst Kim Jung-sook adds, “Our generation learned English by listening to pop songs, but these days, people around the world are learning Korean to understand BTS’ songs.” This is very true. I consider myself a prime example as I started learning Korean due to my interest in learning the meaning behind BTS’s lyrics without having to keep Googling it. I know many other fans that have done the same as well as fans who have not only embraced the South Korean culture, but also become a part of it indefinitely by moving to live there. BTS have managed to get their songs to the top of the charts all over the world, both their Korean and their English tracks. They even managed to have three songs in three different languages (Korean, Japanese and English) in the Billboard charts at the same time a few months ago. These are historic accomplishments that will be remembered long after BTS is no more. The group have no doubt had a significant cultural impact across the world and their ability to obtain this prestigious title as well as a set of diplomatic passports is further proof of their influence. Their roles speak for themselves. As “Presidential Special Envoy for Future Generations and Culture”, they are sure to continue their influence for said future generations across cultures worldwide.

BTS will be travelling to the United States alongside president Moon Jae-In soon as they will be delivering a speech at the United Nations General Assembly for the second time. They will also be performing at the ‘SDG Moment 2021’ event, which will be happening during the United Nations on September 20th. The band is also going to be releasing their “Dynamite” collection with FILA on September 16th and will be releasing their long awaited collaboration with British band Coldplay on September 24th. So it’s yet another busy month for the group! Check out the TikTok below posted by Coldplay frontman Chris Martin showing the two groups working together in the studio for their song- called “My Universe”- which includes a little tease of the song itself. You can be sure I’ll be doing a review of the song when it comes out so watch this space.

The Internet Remembers The Comedy Stylings of Norm MacDonald