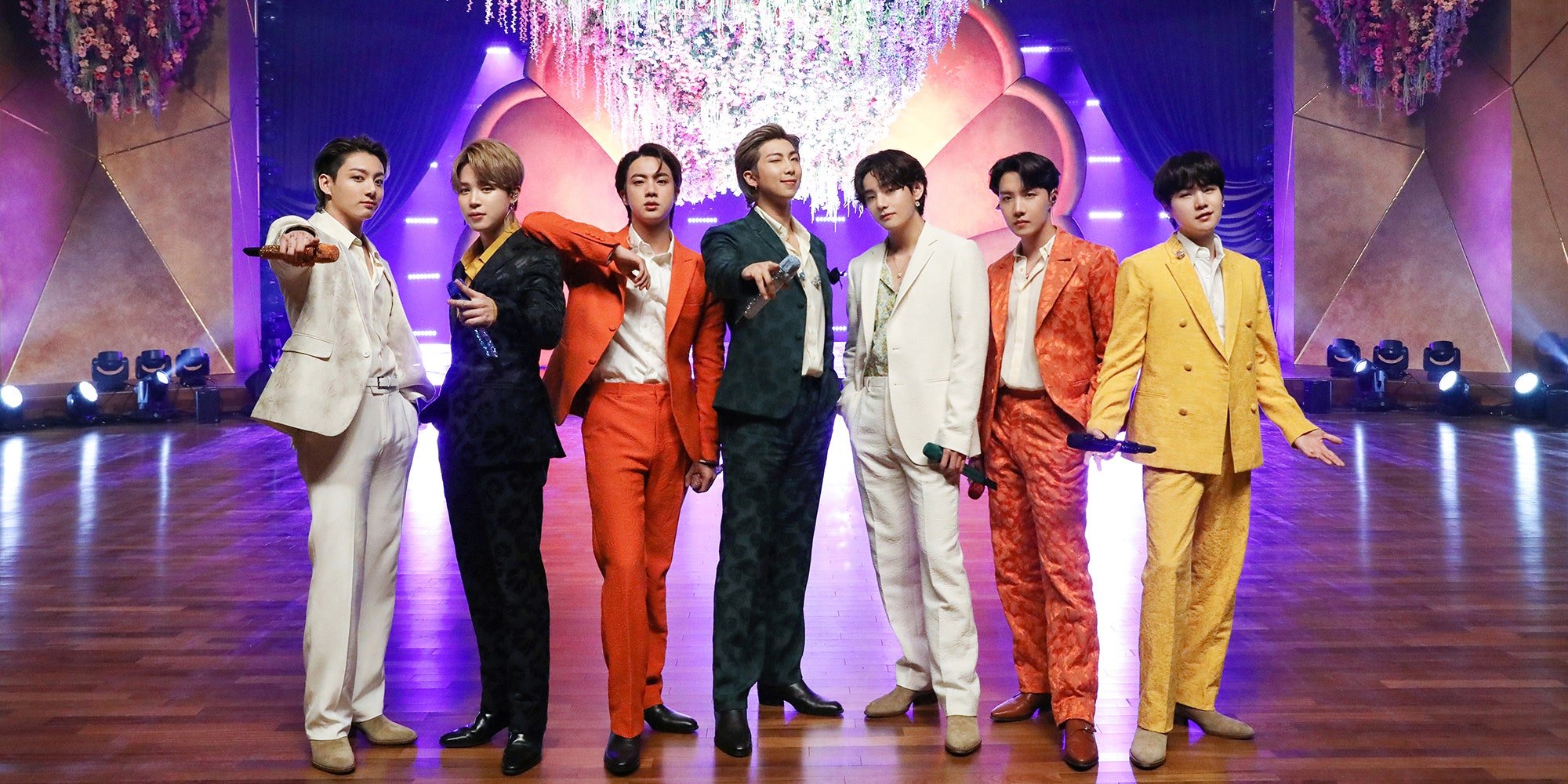 Before I start my blog post for today, I want to clarify that whilst I may not agree with the Grammy’s decision to not award BTS the Best Pop Duo/Group Performance award; I am by no means merely an irritated fan who is just annoyed that their favourite band didn’t win. I also have absolutely no animosity towards the winners of the award, Lady Gaga and Ariana Grande. With that being said, let’s take a look at what I perceive to be the disappointing and arguably unfair treatment of BTS at the 2021 Grammy awards. Again, this will be a lot of my own opinion and speculation so please keep that in mind. Debate is healthy and I would love to engage if anyone has differing thoughts.

BTS may not have taken home the Grammy that they were nominated for at the awards last night- the award for Best Pop Duo/ Group Performance- but they certainly made their ARMY fans0 myself included- immensely proud with all that they have achieved as well as their incredible Grammy performance of their nominated song “Dynamite”. The group and their production team recreated the Grammy set in Korea with huge attention to detail. The group then took to the rooftop to perform their iconic song, becoming the first Korean artists to do so at the Grammy awards. SUGA even got to dance again after taking a break since last year for shoulder surgery. It was all in all, a great performance. Their achievements so far have been incredible, with this performance at the Grammys being the cherry on top of the cake. “Dynamite” absolutely obliterated records following its release last summer. So that you see what I mean, here are just a few of the records it broke: the fastest song in iTunes history to reach number one in 100 countries, the most viewed music video teaser of all time, the biggest YouTube video premiere of all time, the biggest music video premiere of all time and the only song in history from an Asian act to debut at number one on the US Billboard charts. I could go on, but you get the idea.

Some news outlets were referring to BTS’s loss as a failure and I cannot help but disagree firmly. No, this isn’t just the rantings of a BTS fan-girl. BTS are a group who have proved time and time again that they are able to pull in huge numbers as well as create brilliant music. “Dynamite” may not be a work of lyrical genius, (though King Kong/Kick the drum is sure to one day be heralded as one of the greatest lyrics in history) but it is a cheerful, well made, catchy disco pop tune that came around at exactly the right time; right in the middle of the worst peak of the pandemic in the summer of 2020. The group have also worked incredibly hard to market their very first English language song, performing it over thirty times at various events and shows since its release. Each performance is a labour of love, with little changes here and there to keep things fresh including Jungkook joining in on the song by not only singing but also playing the drums, a Christmas version of the song and  THAT additional dance break from the Melon Awards. If you know, you know. Not only that, but imagine having to keep performing a song that isn’t even in your native tongue. That can’t have been easier, even for RM who is fluent in English. I intend no ill wishes against “Rain on Me”- the song from Lady Gaga and Ariana Grande which won the Grammy-but this song was only performed once at the 2020 MTV Music Awards. Seeing as the award was for “performance” I genuinely feel that BTS went above and beyond to perform “Dynamite” relentlessly. The group would change it up every time to offer a unique take on the song and their performance of it. It is easy to forget that they are not native English speakers too but I feel like in terms of performance, it is wildly impressive to keep on performing a song that isn’t even in your language.  If that isn’t Grammy worthy, then I’m not sure what is. Again, I have nothing but congratulations for Lady Gaga and Ariana for their win but I cannot see how the one performance of that song outweighs the dozens of varied and interesting performances of “Dynamite” Please don’t burn me at the stake for that. It is just my humble opinion.

I’m going to get into my opinion on the Grammys themselves here so please keep in mind that as with what I have said above, this is my opinion. I completely respect and understand differing opinions so if you feel differently in regards to this I would love to hear from you. With all that being said, I couldn’t help but feel like BTS were somewhat used by the Grammys. There, I said it. Unable to sleep due to a stressful situation at home last night, I decided to stay up the whole night and watch the Grammys to see BTS’s performance live. They were teased various times just before the commercial breaks (there were a LOT of commercial breaks might I add) but as time ticked onwards from 1am to 2am and then to 3am, I started to wonder as to whether BTS were even going to perform. I was half expecting them to be cut entirely but thankfully, this wasn’t the case. They did eventually perform but it was right at the very end of the show. They didn’t get as big of an introduction as some of the other acts though and I couldn’t help but cringe when- after their performance- host Trevor Noah made the point that their recreation of the Grammy set was incredible and that they should probably win an award for it. I mean…yeah…that is what they were nominated for….best performance…you didn’t give it to them though….awkward. It was hard not to feel like the Grammys were using the allure of BTS to reel in their fans and maintain good viewing figures, leaving them until last so that their views wouldn’t drop too far following their performance. That is what it seemed like from my perspective anyway. There are a lot of us in the BTS ARMY so naturally, we make up a lot of views when we tune in. It just seemed a little too coincidental that the set list for the night was altered and BTS ended up dead last. Again, this is all just speculation and opinion but if this truly was this case, it is incredibly disrespectful to use the group in this way. They are seven highly talented and hardworking young men who quite frankly deserve better than to be used for their popularity. They deserve acknowledgement for their skills and talents in music and song writing as well as they determined attitude, their devotion to their fans and humble nature. They even posted their reaction to losing the award right when it happened, which isn’t something a lot of artists would want to do and understandably so. They want us- the ARMY- to be a part of their journey, both the highs and the lows and so they show us every part of it. It is easy to forget that these are actual human beings so to use them in such a way is abhorrent and unforgiveable.

BTS may not have won the Grammy for “Dynamite” but their accomplishments in the face of constant adversity are nothing short of astonishing. They have been around for almost eight years now and it has been an uphill battle for them, constantly being subject to ridicule, mockery and even racism. I must admit, before I became a BTS fan myself I was a little sceptical of them. I had thought they were just a cutesy boy band who played on the hearts of young women to become popular. I hate that I felt like that. That was before I knew anything about them though. I knew nothing of their music or their style, nor did I know about how diverse their fan base is. Thinking back now, I genuinely feel ashamed for being so judgemental before I even knew them. Their devotion and care for their fans is unlike any other fan base I have known or been a part of. Their music is hugely eclectic and even if it isn’t to your particular tastes, there is no doubt that their talent is undeniable. It has been a rocky road for BTS to achieve what they have and they are an inspiration for continuing on with their dreams even when most of the world was putting them down.

Loss is an important part of life. You cannot go through life winning absolutely everything because how can you possibly grow as a person if you never experience what it is to lose or fail? On this occasion, I personally think that even though this was certainly a loss, it was far from a failure. The boys could not have done any more than they did. They worked as hard as they could-sang and danced their hearts out over and over to the point that, let’s be honest, they likely wanted to scream if they had to listen to “Dynamite” one more time- but it wasn’t meant to be. When it boils down to it, their Grammy loss is a small blip amongst a wave of huge successes for them. They do not need a Grammy to validate themselves as successful artists, nor do they need the approval of the committees to prove that they worthy. They are the first Korean act to even perform at the Grammys and that feat seems to have been left by the wayside as various news outlets forget all that they have achieved in the past year and beyond just so they can report them to have “failed”.  When you keep climbing further and further to the top, there will always be those waiting to push you back down. You just have to keep going no matter how many people keep knocking you back.  No matter what BTS’s next move may be, they can be sure that we- their ARMY- will be standing beside them and cheering them on until the end.