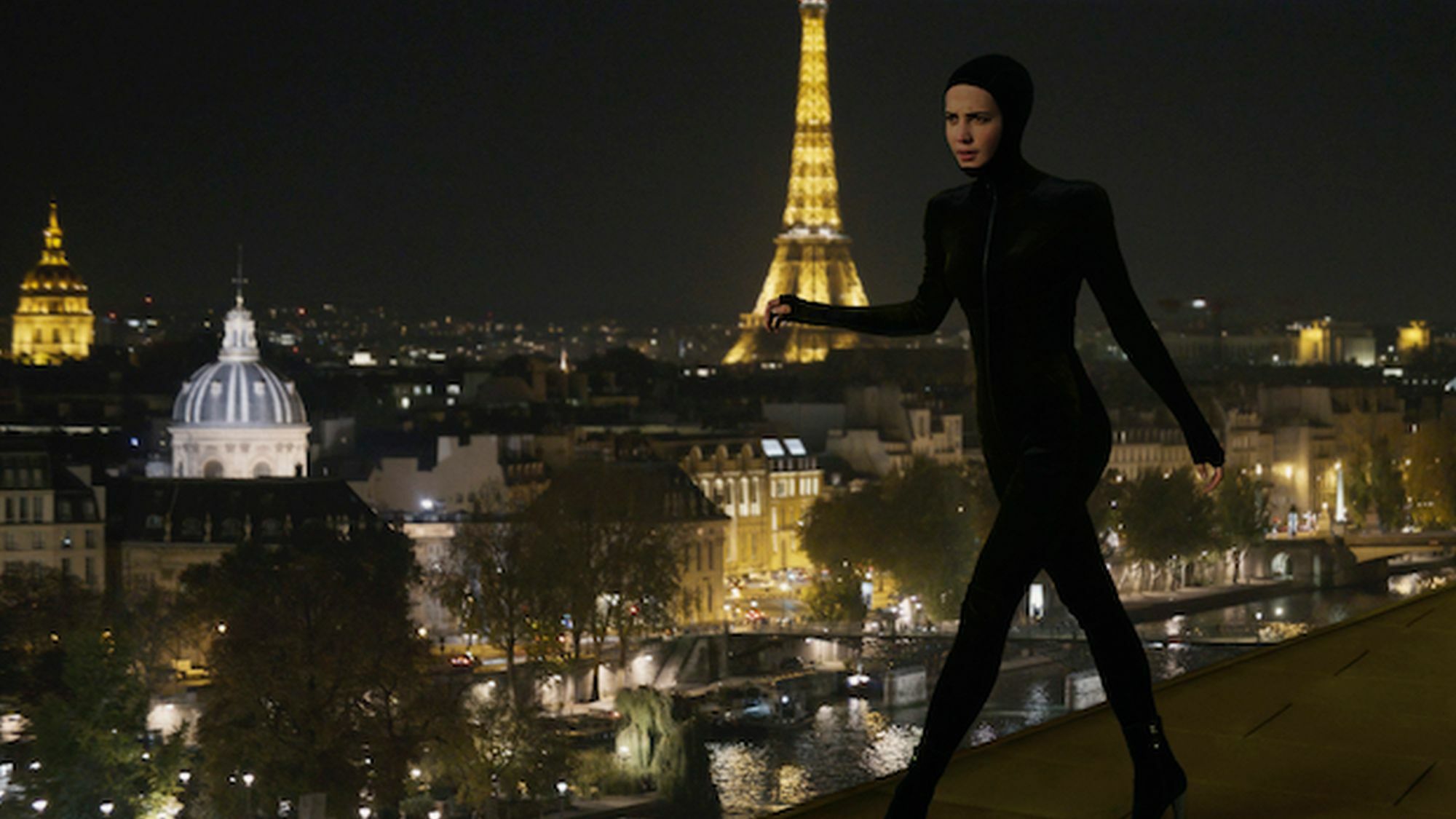 The term “muse” is often used when alluding to a person, most notably a woman. Such and such individual serves as an inspiration, a spark for creativity. Is the eruption of thoughts and feelings always and purely for inspirational purposes? Can there be subtle romance? The answer depends on the person who finds their muse and maybe even on the latter too. Here is another question: can a movie or tv show be a muse? The existence of HBO’s latest drama Irma Vep suggests as much.

From writer-director Olivier-Assayas comes this 8-part mini-series about a disillusioned American actress named Mira (Alicia Vikander) who arrives in Paris to film a remake of a crime serial from the 1910s, Les Vampires. The new version’s director is René Vidal (Vincent Macaigne), a popular artist whose recent work has not been met with commercial success. He is also eccentric and prone to violent outbursts, which he is trying to control via medication. There is an entire host of characters with whom Mira interacts, all of whom will have, or presently leave an impact on her. Among them are personal assistant Regina (Devon Ross), costume designer Zoe (Jeanne Balibar), line producer Carla (Nora Hamzawi), co-star Gotfried (Lars Eidinger) former lover Eamonn (Tom Sturridge), and another former lover Lauria (Adriana Arjoni).

The Metaverse of Madness

The above plot synopsis in itself suffices to give readers an indication of what the show is about. Young star stars flee the Hollywood machine to shoot a lower-budget French project. Dramedy ensues. The reality is that Assayas’s endeavour is impressively meta. For those unfamiliar with how deep Irma Vep’s layers go, buckle your seatbelts. The aforementioned series Vampires is a real thing. It was written and directed by Louis Feuillard in 1915 and 1916. It can be streamed on the Criterion Channel right now. Irma Vep is a character in that series. Consider her the original Catwoman (the Vampires are not creatures of the night but rather gangsters).

So far so good. In 1996, Olivier Assayas made a film called Irma Vep starring Maggie Cheung. In it, Cheung played a Hong Kong actress called to Paris to shoot…a remake of Les Vampires. Shortly thereafter the director and star fell in love and were even married for a few years. Jump forward to 2022 and the Frenchman is back with a mini-series remake of his own film which itself was a meta-movie of the serial from 1915. By the way, the 1996 film is referenced in this new show. The new version of René Vidal, also a character in the 90s production, made that movie. He also has dreams of his ex-wife, a Hong Kong actress with whom he fell in love with on set.

Several film and television projects aim for meta quality. The upcoming Lightyear is a movie within the Toy Story universe for instance. The 2022 Irma Vep surely challenges for the top spot as one of the more meta productions out there. Direct sequel? Spiritual sequel? Reboot? Alternate timeline? Only Assayas knows the answer.

With so many references overflowing, either to a series over a century old or to the filmmaker’s own work from a few decades ago, some viewers may justifiably be turned off. Irma Vep runs the risk of being no more than a collection of snobbish television and film references, not to mention allusions to the private lives of certain individuals. The latter is not material everyone is automatically dying to know about.

HBO shared 4 episodes for the purposes of this review. Halfway through the story, Assayas succeeds just enough to straddle the line between making a show for everyone and a show that only those “in the know” will appreciate. Some plot elements dip their toes in self-referential existentialism only some will appreciate. Then again, Olivier Assayas is not Steven Spielberg. He rarely, if ever, sets out to make crowd-pleasing movies that play to global audiences. He is what the cool cats call an “auteur.” Most people who opt to give Irma Vep a chance probably have an idea of what they’re getting themselves into. They are already in the know and relish basking in insider knowledge.

As such it is difficult to take the show on its own terms. Not impossible mind you, just a bit challenging. One wonders if the series is even meant to be viewed in a vacuum. In its defense, Assayas and company do make it abundantly clear what Les Vampires is. Whenever a scene is being prepared, Irma and other cast members are shown a clip of the original show on a smartphone. That becomes what the viewer sees. In that respect, there is some hand-holding for those allergic to watching silent films, in addition to contextualizing some of what’s going on.

Readers need not think the 2022 Irma Vep is solely for fans of the 1996 film and Les Vampires. A wider spectrum of people may take interest in Irma’s misadventures. This larger group of people is surely not as significant as those interested in the latest Star Wars or Marvel installments. Nevertheless, curious viewers with some interest in Hollywood, filmmaking, and the public’s perception of those subjects should find something to like.

For decades filmmakers have enjoyed making projects about the creative process itself. One need only glance at the list of some Academy Award winners to note that Hollywood loves it too. Rather than discourage people from watching the show, this angle could very well be their way in. Anyone can understand the trials and tribulations that come with bringing a project to life. Deadlines and budgets must be respected, personalities clash, objectives must be honed as a unit.

The cast and crew all have distinct personalities, each has their own aspirations and demons to wrestle with. Several interactions explore what the principally concerned people think of moviemaking and Hollywood. Getting handsomely paid is great, but sometimes one grows tired of making superhero movies. Fragrance product lines want to close deals with starlets. One co-star feels their character is underwritten. Another can’t act properly unless high on crack. These things really happen during filmmaking (perhaps alcohol more commonly replaces crack, to be fair). Irma Vep is not as satisfied with itself as it may appear at first glance. It does strive to develop its cast of characters. Where this all goes remains to be seen in a couple of months from now. From the first 4 episodes, Assayas obviously wants to welcome viewers to the world of the filmmaking process where everyday issues and frustrations arise.

Irma Vep the character and Les Vampires are evidently muses of Olivier Assayas. The 2022 version suggests that the director’s own life serves as a muse, just as his former star Maggie Cheung served as a muse in 1996.

Yes, it’s all a bit self-indulgent. The Frenchman is a talented writer and director, however, and his qualities elevate the material enough to make it a worthwhile trip. After all, if he is so willing to open himself to the audience, who are we to shun him?